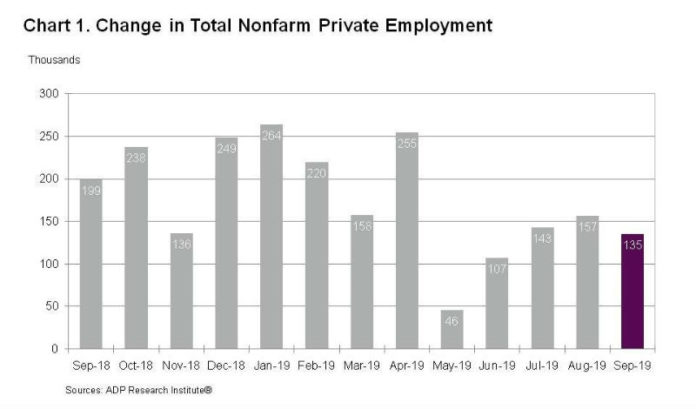 The nation’s private sector employment grew by 135,000 jobs in September, according to the latest report by Roseland-based ADP.

The payroll and human services company said in its monthly ADP National Employment Report that total nonfarm private jobs were down 60,000 positions when compared to last month’s 195,000 new roles.

“The job market has shown signs of a slowdown,” Ahu Yildirmaz, vice president and co-head of the ADP Research Institute, said. “The average monthly job growth for the past three months is 145,000, down from 214,000 for the same time period last year.”

By company size, large businesses with 500 or more employees dominated the month, adding 67,000 new positions, while medium businesses of with 50-499 workers added 39,000 and small businesses of under 50 employees added 30,000.

Breaking down the service-providing industry, education and health services was the top gainer, adding 42,000 new positions. Next up was trade/transportation/utilities, which saw a growth of 28,000; professional and business services added 20,000; Leisure and hospitality added 18,000; financial activities added 8,000; and both information and other services added 5,000 each.

In the goods-producing sector, construction added the most with 9,000 new jobs. Manufacturing saw a growth of 2,000 while natural resources and mining lost 3,000 roles.

“Businesses have turned more cautious in their hiring. Small businesses have become especially hesitant. If businesses pull back any further, unemployment will begin to rise,” Mark Zandi, chief economist of Moody’s Analytics, said.