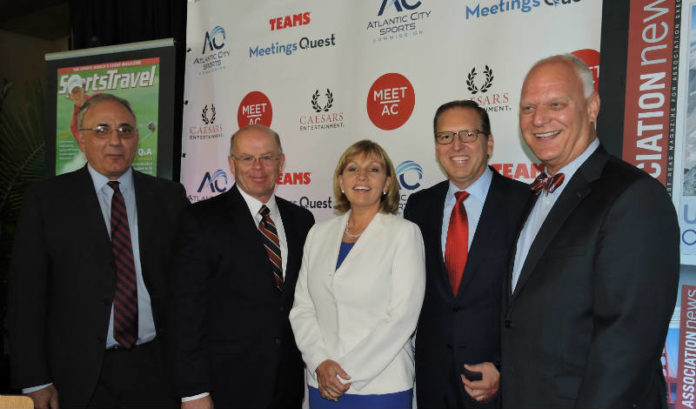 Atlantic City is undergoing some changes at two prominent organizations, as the CEO of the Meet AC sales and marketing organization is stepping down at the end of the year, and the management company overseeing both Jim Whelan Boardwalk Hall and the Atlantic City Convention Center has named a new general manager for the venues.

Jim Wood, the CEO and president of public-private partnership Meet AC, is returning to Kentucky at year-end to care for his wife, who is rehabilitating from a severe fall, the organization said this week. Wood became Meet AC’s first CEO in 2014, when the Casino Reinvestment Development Authority created the organization.

“Jim has been a driving force in continuing to position Atlantic City as a top destination for the meetings and conventions market,” CRDA Executive Director Matt Doherty, the Meet AC board chairman, said in a prepared statement. “We wish Jim and his family the best in the future.”

Meet AC is focused on growing the city’s meetings and convention market. Wood created the Atlantic City Sports Commission as part of the organization in 2015, and has attracted several prominent industry events to the city during his tenure. During his time at Meet AC, organizations have booked more than 1.8 million room nights, bringing in nearly $1.9 billion worth of economic impact.

“It has been my pleasure to lead a great staff,” Wood said in a statement. “The organization is in great shape for the future.”

The Casino Association of New Jersey paid tribute to Wood in a statement:

“On behalf of the Casino Association of New Jersey, I want to thank Jim Wood for his tireless commitment to Atlantic City,” President Steve Callender said. “Jim has successfully served our city over the last five years, delivering substantial growth to our meetings and conventions market. Thanks to Jim’s vision and leadership, he has built a strong foundation that will allow us to continue to establish Atlantic City as a world-class beachfront resort and business conference destination.

“We look forward to a national search being undertaken immediately to find a world-class replacement to take the helm at Meet AC, ensuring the great work can continue uninterrupted for the benefit of the entire region.”

Spectra, the Philadelphia-based venue management, food service and hospitality company that runs the properties, said Jim McDonald has been named general manager of the facilities.

McDonald, a 20-year industry veteran, will supervise the properties at the direction of the CRDA, which oversees them through Spectra’s contract.

“Jim has a tremendous reputation in the venue management industry and has been a great asset to both the Atlantic City Convention Center and Jim Whelan Boardwalk Hall,” Doherty said. “We look forward to his leadership and his vision for the future of both buildings.”

McDonald had been assistant general manager and director of operations for both buildings since 2014, handling labor relations, budgeting, maintenance and other operational elements. He led the creation and execution of a five-year, $96 million capital improvement plan that is in process at both properties, as well.

“Jim has made an enormous impact during his tenure as assistant general manager with these two major Atlantic City venues, so he was the clear choice to become our new general manager,” Mike Scanlon, Spectra’s senior vice president of arenas and stadiums, said in a statement. “With deep roots in the area, he understands that the Atlantic City Convention Center and Jim Whelan Boardwalk Hall are economic drivers and prime examples of a thriving region. Both facilities are in good hands with Jim at the helm.”