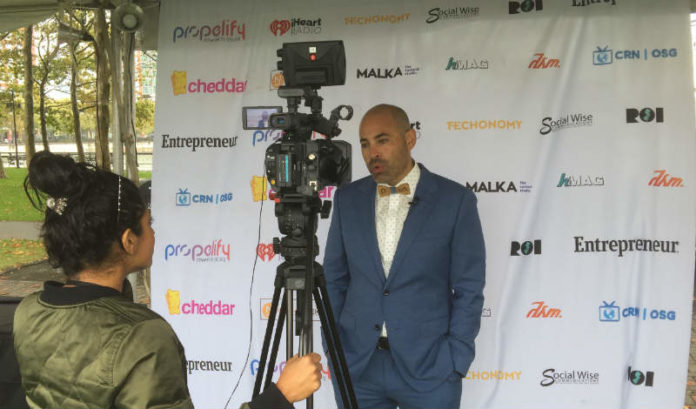 “I know it sounds cool, but running a business out of your garage sucks.”

It was a funny sound bite. But tough talk. And an honest assessment of what life is like as an entrepreneur.

More than anything, the words of Chien Huang, the CEO of Boxed, represented what the Propelify Festival is supposed to represent: Real-life advice on how to succeed as an entrepreneur — something that is a lot harder than most realize.

It’s the reason the festival’s creator, Aaron Price, started the event, which held its fourth annual gathering Thursday in Hoboken.

“Showing up,” was the theme of the event after an unexpected burst of cold, wind and rain dampened attendance.

Price understood the weather ended any hopes of topping Propelify’s attendance record, but he said he felt those who did come were the ones who had the perseverance to overcome tough obstacles — like starting a business in a garage.

“I think the weather is really a great metaphor for the people who showed up,” he told ROI-NJ. “I’ll be honest. It’s disappointing. It would be nice if this was taking place in the sun. But it’s clear that this is a community who shows up, who pushes through, who has the perseverance to make things happen.

“I’m hearing great things. I’m hearing people are meeting great companies and that they’re loving the talks. I’m really thrilled with how it’s coming together despite the weather.”

Judith Sheft, associate vice president, technology development, for New Jersey Institute of Technology, lives at events such as Propelify. And, while she said better weather would have brought more people, she said it may not have produced better conversations.

Limited numbers can bring stronger discussions, she said, pointed to NJIT’s booth promoting its VentureLink accelerator as well as that of Hackensack Meridian Health, which had representatives from the Bear’s Den, its “Shark Tank”-like investor platform.

“They are having real discussions,” she said. “People are making real pitches and it’s not so packed that you can’t really talk to anyone.”

Sheft said the event continues to serve its purpose: To bring all elements of the tech community together.

“It’s a way for us to say we have a great ecosystem in New Jersey,” she said. “Here’s an event that’s demonstrating, the weather withstanding, that we’ve got a place to move ahead.”

Price, who started at the Tech Council in August, said he’s confident next year will be bigger and better. But, he points out, the goal always has been for Propelify to be more than just one event. He wants to create an atmosphere that lives each day.

“I don’t know that this event needs a lot more — other than just better weather,” he said. “Obviously, the more we can bring in the tech community through the Tech Council to this event, the better. But I want this to be the annual celebration of what’s gone on throughout the year. And then I think there’s a bunch of other smaller things that can make a difference.”

Price rattled off his vision.

“I want to make sure that the Tech Council provides the right service to its membership so I can try to do what I’m doing here, which is empowering people to build their business year-round: smaller events, online programming, mentorship,” he said.

“We want to have a clear value proposition. What you can expect next year is a much more cohesive value proposition for entrepreneurs and innovators in New Jersey. And that this event will continue, but also with a storyline that connects us all year long.”