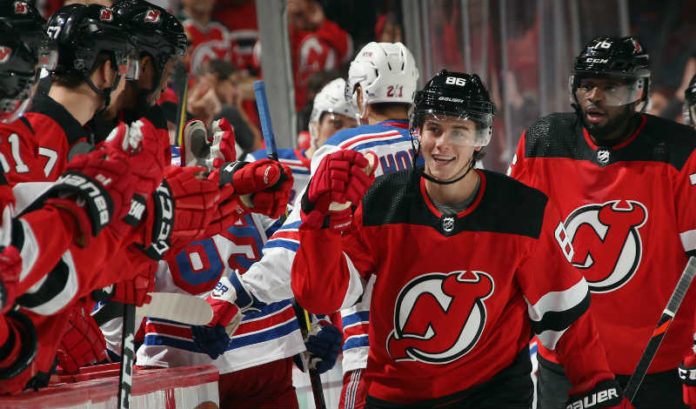 The New Jersey Devils open the season Friday night with a red-carpet ceremony for the team at 4:15 p.m. and a game against the Winnipeg Jets at 7. If you’re a Devils fan, you likely have been hearing about this — and lots of other Devils news — for months.

The team’s offseason transformation has been about more than just adding top players, which they did. According to newly promoted team President Jake Reynolds, the Devils have made a tremendous investment in a social media marketing team and salesforce that already was outperforming many of its peers.

The payoff, fan engagement during the NHL Draft — when the Devils had the No. 1 overall pick for the second time in three years — was up substantially on every social media metric.

Reynolds points to the growth of the Devils’ content team from two to 11 people as one reason. But he said it is all a part of a bigger plan to improve the experience for those following the team.

“It’s incredible to see how this business, and the world, quite frankly, has changed even from five years ago,” Reynolds said. “Just the investment that we’ve made in our content team and the platforms — how we’re engaging, who we’re engaging with and what channels we’re engaging our fans with, matters.”

Reynolds, who was elevated to team president from his previous role as chief revenue officer for Harris Blitzer Sports & Entertainment, said the ultimate goal is to go global.

And not just in Europe, where many of the players are from. The Devils are big in China, having had 40 games on TV there the past two seasons.

“The NHL is making significant investments there,” he said. “We are incredibly excited about what is to come and how the game is, is growing over there.”

Reynolds talked with ROI-NJ earlier this week. Here’s a look at the conversation, which has been edited for space and clarity.

ROI-NJ: Let’s start with the social media push. It’s easy to tell a general manager and coach that the team needs to participate, but not always so easy to have them do it willingly. How is the relationship here?

Jake Reynolds: We’re fortunate. It is a true partnership in every sense of the word. The relationship that we have between the hockey side and the business side is as good as I’ve ever seen anywhere. (General Manager) Ray Shero gets it. (Head coach) John Hynes gets it.

Hynes understands the need to give access to the business side, and our content team in particular, so they are able to be in and around the team and give our fans a little peek behind the curtain. That helps build that social connection.

When the team hits the ice, he wants that building full and he wants us to be able to create the greatest home-ice advantage in the NHL. And he understands, in order to do that, there needs to be investment and there needs to be a partnership in terms of being able to give our fans the opportunity to spend time and get to know the players.

ROI: The players. It always starts with the players. This offseason — through the draft, free agency and trades — the Devils got a number of good ones, including No. 1 overall pick Jack Hughes and former Norris Trophy winner P.K. Subban. How much does that help this push?

JR: Ray came through in a pretty incredible way. In a 24-hour period, we got a generational talent like Jack Hughes and then traded for a superstar in P.K. Subban. Then we got Wayne Simmons and Nikita Gusev. We’ve added not just incredible talent, but star-power personalities to this roster.

ROI: We’re guessing that partnership starts with Subban. He’s not only a connected star in his own right as someone who has made community activism a key part of his personality, he is engaged to Olympic skiing champion Lindsey Vonn, another social media standout.

JR: We’re fortunate that our players genuinely care about the community in which they play. And I think P.K. is an incredible example of that. What he has done previously, both in Montreal and Nashville, is amazing. One of the first conversations I had with him when he got to New Jersey was about a program he has called ‘The Blue Line Buddies.’ He wanted to bring it to New Jersey.

I don’t think we’ve ever had someone like P.K. And he and Lindsey are a sports power couple. There is no doubt about that.

ROI: Social media marketing numbers are one thing. Ticket sales are another. And, in the Devils’ case, it’s another area that’s on the rise — despite the fact that last year’s team did not make the playoffs.

JR: We are selling hope and excitement. Even last year, a difficult year where we were injury-stricken a bit, people saw the path that we were on. They knew we had the right talent and we knew we were on kind of the right trajectory in terms of the team. And then you’re able to kind of add these key pieces this off season and it puts us in in another position.

ROI: The Devils’ outlook is stronger than it has been since Josh Harris and David Blitzer bought the team in the summer of 2013. Are you ready?

JR: One of the phrases I use internally is, ‘Are we 100-point ready?’ If you’re a 100-point team, you’re in the mix. You’re a playoff team and you’ve likely got a great opportunity to make a run at the Stanley Cup.

So, are we in a position that, when this team does take off and when lightning does strike and you get lucky and you get a No. 1 pick and a generational talent in Jack Hughes and you trade for a former Norris trophy winner in P.K., do you have the right infrastructure in place to capitalize on that opportunity? I think we do.

Look at the capital improvements to the actual arena (the Prudential Center). Look at the new scoreboard that we put in two years ago. Look at the Grammy Museum. Look at our new premium spaces. There has been some incredible additions and enhancement to the building and to the fan experience.

ROI: For the first time, that fan experience will be able to extend out to Mulberry Commons, the park adjacent to the Prudential Center that the team has wanted since the building opened more than a decade ago. How will that impact the fan experience?

JR: There are going to be so many opportunities to use that space, whether it’s going to be pregame concerts, different types of parties. You know, playoff watch parties. Stanley Cup Finals watch parties. We are incredibly excited about being able to activate that space and utilize it both for game enhancements as well as growing the game of hockey.

ROI: Which, of course, you’ll tell your fans on social media.

JR: We’ve got visionaries in terms of Josh Harris and David Blitzer. We have incredible leadership with Scott O’Neil and Hugh Weber. They are all aligned and committed in terms of what direction we want to go and the opportunity that we want to be able to create for our fans.

We want to build that emotional connection (so fans) get to know not just these players, but fall in love with the Devils brand. Because, as they are raising their kids, they’re raising the next generation of Devils fans.

Small, but mighty: The Lemon Group is one-woman shop, but she...