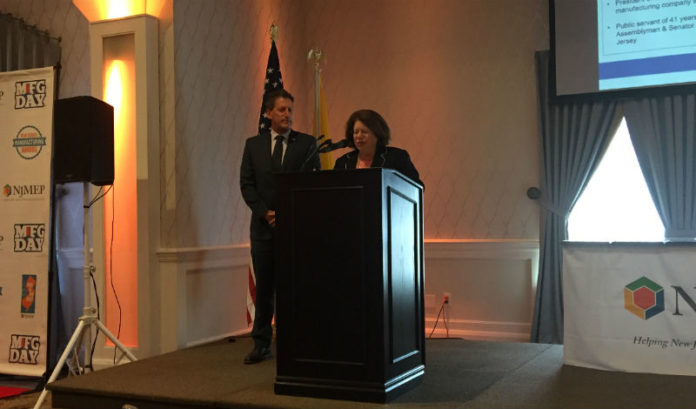 Tyler Morgus, business unit leader of the Mechanics Division of ThorLabs, had some simple advice for government officials: Speed up.

“I think the state really needs to think about streamlining its processes,” he said. “We need the regulations to protect the environment and protect the state, but they have to realize that business proceeds at a very rapid pace now.”

Newton-based ThorLabs is moving well, as it was named Manufacturer of the Year in the large (251 employees or more) category. Morgus said he wants to see government do more to help all manufacturing companies succeed.

“If the government wants to regulate and have business be successful, they have to be just as fast as business,” he said. “They need to work on that speed. Streamlining, giving us clear direction on how to get through all the requirements — so we can build a business that’s good for the state and for the economy — is critical.”

The elected officials in the room told the crowd of nearly 400 that they heard that demand loud and clear.

State Sen. Linda Greenstein (D-Cranbury) said she and others are making this is a top priority. More so, she said, the time is right to act.

She pointed to a committee sponsored by Sens. Steve Oroho (R-Sparta) and Paul Sarlo (D-Wood-Ridge) that is working to cut through red tape.

“It’s not going to just look at issues that affect manufacturers, but I think they are going to make those the first ones they look at,” she said. “It’s going to be very important. They are calling it the efficiency and innovation program. The goal is to look at regulations that are problematic and may not be necessary.”

Even more important, she said, is to look at how regulations are carried out.

“If somebody applies for something and the file is sitting in someone’s office for six months, that’s a problem,” she said. “That’s something that we have to prevent. Sometimes, it can be lack of staffing, but that’s no excuse for allowing it to happen. We have to find a better way for us to do it.”

Greenstein said she knows what the ultimate result could be.

“I’ve heard that type of complaint from many manufacturers, people who say they are leaving the state because (they) can’t get things done,” she said. “We want to do everything we can to smooth away (the process).”

Greenstein said the caucus is currently trying to streamline a number of bills.

“We have at least 40 bills; we’re trying to whittle them down into a couple of bills,” she said. “And we have a commitment from Senate President (Steve Sweeney) that these are going to go through.”

That’s just the first step. As the new chair of the Manufacturing Caucus, Greenstein said she is working to redefine its mission, too.

“The change that we want to make, and I feel we’ve already begun to make, is that people look at manufacturing in a new way — not as just some side thing that’s out there, but as an integral part of the New Jersey economy,” she said.

“As recently as the other day, I was talking to someone and the person said to me: ‘Are you kidding? Is there any manufacturing in New Jersey?’ I do believe that many people are ignorant to this and that we need to do everything that we can to change that.”

John Kennedy, the CEO of NJMEP, said he feels a greater sense of optimism than he has in his previous seven years of heading the group.

“We have a caucus that’s really interested,” he said. “They’ve put the work in, they’ve reviewed bills. They are really starting to talk about things and do things: Meetings with Sen. Sweeney, meetings with (Gov. Phil Murphy’s) team.

“The (Economic Development Authority) and the Business Action Center and the Department of Labor have really stepped up. They’re really partners in all of this. So, for the first time in a long time, we have support for this industry — this critical industry in New Jersey.”

Of course, Kennedy — who owned two manufacturing companies of his own — knows it’s all about the bottom line.

“But they’re actually meeting us and talking with us. They are hearing what manufacturers and STEM companies need. That understanding helps because they may not have realized they are not asking for special treatment, they’re just asking for treatment that would help them stay in New Jersey and be successful.”