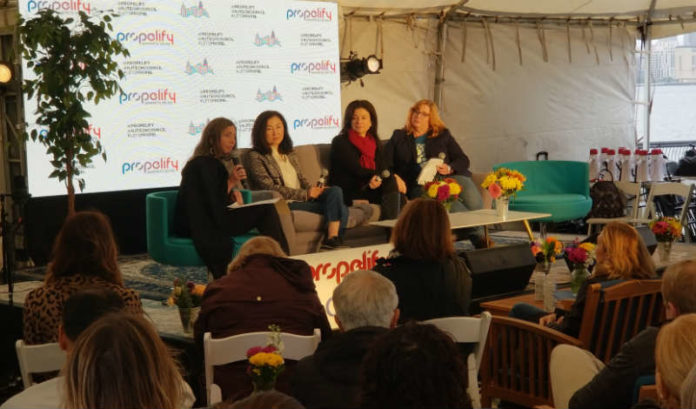 Being a self-described serial entrepreneur and a more-than-a-decade-long investor in women-owned companies, she’s seen it all.

So, when first lady Tammy Murphy asked the members of the Seeds for Success panel at the Propelify Festival on Thursday why investors should back women-owned companies, Tedesco quickly jumped at the chance to answer.

“Why is really easy,” she said. “Because the returns are better.”

Hard to argue with that. And the facts back it up.

She noted a seed venture fund in New York that did a study comparing all of its portfolio companies and found it got 63% better returns from its gender-diverse and women-led teams than its all-male teams.

“So, it’s not rocket science,” she told a crowd of a few hundred.

But, it is an issue. One that Gov. Phil Murphy is determined to address.

It’s why the state, led by the Economic Development Authority, is joining with Golden Seeds to form a New Jersey chapter.

It’s why Murphy, earlier this year, expanded New Jersey’s Angel Investor Tax Credit program. The program, which provides a tax credit for a percentage of an angel investor’s investment in a qualifying emerging New Jersey technology or life science business, saw its benefit increased from 10% to 20%.

He also added an additional 5% bonus available for investments in minority- or women-owned companies.

Kathleen Coviello, the director of tech and life sciences for the EDA, said the new incentive should make investing in New Jersey a no-brainer.

And it’s not just the value, Coviello said. It’s the valuation, too.

“We’re seeing a lot of international investors come to invest here because they know that there’s great entrepreneurs and, from an investment standpoint, one of the unique aspects we see in New Jersey is that our valuations are realistic,” she said. “So, we’re not seeing kind of the frothy valuations that you’re seeing in Boston, New York and California.”

That was the message at Propelify. If you’re a woman-owned company, you are wanted in New Jersey. Tammy Murphy said that loud and clear.

“As we grow New Jersey’s innovation economy, it’s really essential that we correct this issue, not just because it’s the right thing to do, but it’s obviously the smart thing to do. And I could not be more excited to partner together with the (EDA) and Golden Seeds to address this imbalance.”

“Golden Seeds has a 14-year track record of successfully supporting women-owned startups by increasing available angel capital and by providing mentoring. This is all for women leaders and women-led businesses. Our partnership with Golden Seeds is going to open doors that lead us to transformative growth, both for economic and social areas.”

Coviello sees all the benefits.

“I think that the real benefit is got to be two-fold,” she said. “We have so many talented women in New Jersey who have come up the ranks and have incredible knowledge to offer to new entrepreneurs. And they didn’t have necessarily a platform to go to, to learn how to be an investor, to learn about this asset class and to have a new set of peers who are interested in supporting the next generation of female entrepreneurs.

“So, I think it will (bring together) some of our talent that is more seasoned here and, hopefully, give them a purpose in helping support the next generation.

“So, it’s a wonderful opportunity for all the New Jersey residents to work together both from the investor side and the entrepreneur side.”

Tedesco said Golden Seeds is all in.

Going across the river, she said, is no fun for the money people.

“To be honest, the investors don’t want to go to New York either,” she said. “We’re happy to have meetings and office hours here in New Jersey because I think we have plenty of fabulous companies in New Jersey.”