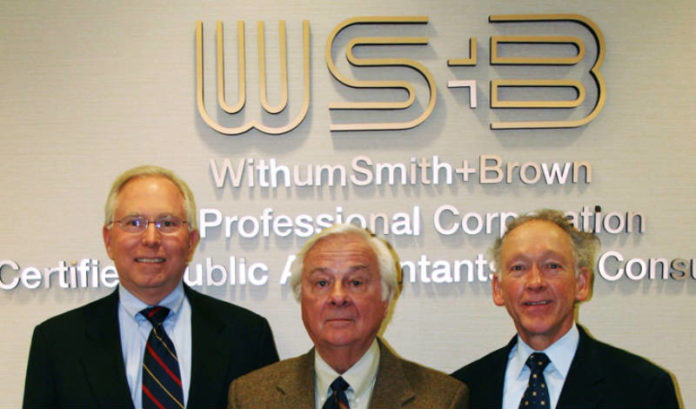 Fred Withum, co-founder of the accounting and advisory firm WithumSmith+Brown P.C., has died at age 84, the Princeton-based firm announced this week.

Withum, who retired from the firm in 1987, was one of four original founders in 1974, along with Len Smith, Ivan Brown and Doug Sonier.

“From our early years as a firm, Fred was instrumental in instilling in us the importance of client service, integrity, growth and community service,” Smith said in a prepared statement. “These principles have stayed with us for over 40 years and have become the foundation for the ‘Withum Way.’ Fred was a big believer in planning, and often reminded us of a quote from Lewis Carroll: ‘If you don’t know where you are going, any road will get you there.’”

The industry visionary was instrumental in shaping the firm’s three core pillars for commitment: clients, people and communities, the firm said in a news release. He also helped to establish the firm’s long-term strategic initiatives, including then-revolutionary planning meetings and partner retreats.

Today, the firm — which goes by “Withum” — has offices in New York City, Boston, Philadelphia, Washington, D.C., and Orlando, Florida, in addition to New Jersey.

“Fred was a true entrepreneur who encouraged and supported each of us in expanding the firm’s footprint and services,” Sonier said in a statement. “The confidence he instilled and demonstrated, combined with measured risk-taking, were key components that contributed to the growth and success of the firm.”

The firm also credited Withum with championing its values of outreach and work-life balance.

“Fred was passionate about involvement in outside activities and giving back to the community,” Brown said in a statement. “He encouraged us to join and actively participate in charitable and professional organizations. In addition, he advocated for providing pro-bono and reduced-fee services to not-for-profits, many with June 30 (fiscal year end), which was a win-win proposition.

“A strong proponent of family involvement, Fred also encouraged us to carve out time to watch and participate, via coaching and similar activities, in our children’s lives.”

Withum also championed the peer review process in firm’s early days, and, in 1977, the firm became one of the first non-national firms to voluntarily take part in the American Institute of CPA peer review program. Since then, it has successfully passed each of its 13 peer reviews.

“’Our services are for sale. Our integrity is not,’” CEO and Managing Partner Bill Hagaman quoted Withum as saying. “This truism still applies, as Withum team members continue to hold up the highest levels of values and ethics, and expect the same from those with whom they work.”

Withum, who was born in Milltown and most recently lived in Killington, Vermont, is survived by his wife, Marion Luchsinger Withum; son, Frederick S. Withum III and his wife, Jacquie; stepsons Frank, Mark and Scott Cassano; brother, Jack Withum; six grandchildren and a great-granddaughter.

According to the firm, he was passionate about Civil War and Revolutionary War history, as well as the New York Giants and spending time outdoors.