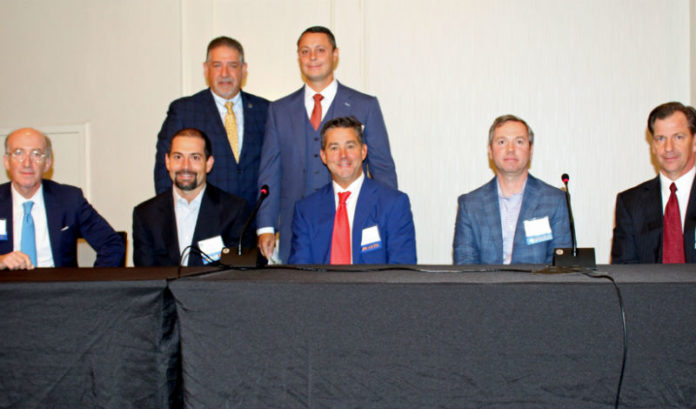 Everyone knows New Jersey has long outlived the idea of the suburban office park. The question is: Have the state’s legislative and regulatory bodies moved past it, too?

“We still use terms like office, retail, industrial,” he said. “Those things are all coming together. But, unfortunately, our planning and zoning is still taking the property types and separating them.”

Klatskin was speaking at a recent Meadowlands Chamber Thought Leaders Conference. The event was billed as a discussion about future development in the Meadowlands area, but the thoughts from the all-star panel are fitting for just about every part of the state.

“There’s a massive convergence of retail and industrial right now,” Klatskin said. “I think that we’re still trying to design zoning to look like a 1980s corporate office park. And I think (that’s) not what the customers want.

“The buildings have to be more flexible. We traditionally had parking in the front, loading in the back and the driveway down the side. That’s the way zoning codes were set up. But, today, customers want products going in and out of every wall. They want people parking in all different kinds of spaces and we need to be more flexible with what we can allow.”

Gene Diaz, the principal of Prism Capital Partners who is overseeing the transformative On3 project that straddles Nutley and Clifton, said municipalities need to understand that how companies are using their facilities has changed — and how that impacts transportation infrastructure.

“At On3, one of the things we’re dealing with is going to be fears and concerns about repopulating the campus with 10 or 11,000 people,” he said. “Now, we’re doing it differently than Roche did it. Roche was 9 a.m. and then 5 p.m. You had those peaks.

“By mixing land uses, and this again becomes a policy issue and lesson for public officials, you balance out your traffic patterns. You get rid of the peaks and the valleys, and I think there’s an education process that needs to happen there.”

Ed Russo, CEO of Russo Development, said municipalities need to adjust housing policies to account for the increase of people who want to live closer to where they work.

“Housing policy I think is really critical for the state and other governing agencies in the area,” he said. “The Meadowlands, for a couple reasons, hasn’t seen a lot of housing development with the job creation that you’re seeing now. Not just with the American Dream, but with other large employers coming into the area.

“I think figuring out what we can do to promote more housing development in this area is going to be important for those employers that want to come here and fill those Bergen, Essex (and) Hudson office buildings.”

Simply put, Russo said. “They’re not going to come to our region if there are no new housing options.”

Of course, anyone can point out the problems. Finding solutions is the hard part. And something Diaz said the development community needs to take a lead on.

“We all too often look to the government to solve the problem,” he told the crowd of a few hundred. “But it’s not just the government’s problem. It’s a private problem as well. And I think that we as developers and we as a chamber need to do a better job communicating and working together to create some private solutions.

“You already have Meadowlands Meadowlink (now known as EZ Ride) already working very well. We need to expand private services like that to supplement what the government public policy can’t do because of the constraints that they have.”

The case for expungement: Is now the time?