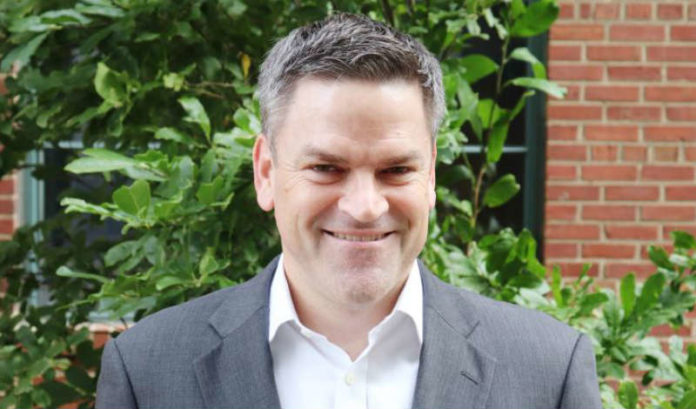 Dave Campbell didn’t hold back. With a resume that includes numerous international trade and business assignments, he couldn’t help but gush about his latest appointment, being named director of the Office of International Trade & Investment at the New Jersey Economic Development Authority on Monday.

Campbell, who had been serving as a senior policy adviser, takes over for Wes Mathews — the first person to have the position. Mathews announced last week he is returning to Washington, D.C., to work in the State Department.

Campbell, who most recently worked in a variety of roles at the U.S. Chamber of Commerce, is eager to get to work.

“I am absolutely thrilled at the opportunity to serve the state and to follow Wes Mathews’ sizable shoes,” he said. “This is an important job. We are the lead cheerleaders for the state when it comes to attracting international companies, international entrepreneurs and emerging technologies from abroad to the Garden State.”

He talked with ROI-NJ about the new role. Here are his remarks, edited for clarity and space.

ROI-NJ: International business is as broad a starting point as you can get. Talk us through the pitch process?

Dave Campbell: The pitch really depends a little bit on your audience, but, in broad strokes, we are identifying target markets and target clusters. The things that we’re highlighting include:

Those are some of the broad strokes that I emphasize when I meet with would-be investors or with foreign embassies or foreign consulates. And then you get a lot more nuance-specific, depending on the specific circumstances and problems.

ROI: Do you identify countries where the state wants to interact, or specific industries — or a combination of both?

DC: Ideally, it’s a nexus of both. If you look at the jurisdictions that look to attract foreign direct investment, or FDI, in simple terms, you’ve got an X and Y axis, where X is your market, and they should ideally intersect. So, for a place like Germany, I’ll talk to any investor to see if we might be the right spot for them because historically it has been. If it’s Germany and it’s aerospace, then we know they’re a perfect fit for advanced manufacturing because aerospace and aviation lineup with the sectors that we want to try and strengthen and intensify here in the state.

The key is understanding fit, because we want to strike a balance that’s ambitious and a bit of a reach, but you also want to double down on things that you’re good at. I would rather target five or 10 or 15 or 20 countries and say eight or 10 sectors, then have someone come to me and say, ‘Let’s penetrate 95 markets across 60 sectors.’ That’s just too much of a scattershot. I think we’d rather be ambitious and reasonable in our successes, and then go on from there.

ROI: You talked about identifying 10-20 countries and 8-10 sectors to concentrate on. Can you give some specifics on each? That’s going to be the biggest thing readers will want.

DC: The sectors we are targeting are aligned with those set forth in Gov. Murphy’s economic plan. These include life sciences, information technology, clean energy/offshore wind, transportation/logistics, advanced manufacturing, financing/insurance, and food and beverages (non-retail). We are also focused on connecting with folks within the film and digital media sphere.

To maximize greater foreign direct investment into the state, we are targeting a variety of markets across the globe. Please stay tuned for further announcements.

ROI: New Jersey has strong connections to Europe. Gov. Phil Murphy already has made trade missions to Germany, Israel and Ireland. Let’s talk about Asia and Central and South America, two areas where New Jersey has huge populations. The state is one of the most diverse in the nation. How does that help with the world economy?

DC: Diversity is one of our greatest strengths and one of our strengths is our diversity. They work together, hand-in-glove. If you look at some of the diaspora populations across the state, we have sizeable populations from Korea, Japan and China and, of course, our Indian population is huge, too. The same certainly is true, and in some cases to even a larger extent, in Latin America. Taking advantage of this is definitely something I want to focus on.

DC: We will do outreach to embassies and consulates, but we’ll also do outreach to specific trade groups, whether there’s a chamber or another group. I want to engage these populations in thoughtful and strategic ways, because members of these diaspora populations can articulate with folks that are back in their home countries in a way that I might not be able to, whether that’s cultural or just in their mother tongue. They know folks that they may be able to deliver a message that’s a bit different than what we can deliver — and they will actually be able to amplify it.

So, I want to meet with some of those individuals. A lot of them are successful businesspeople. I would like to meet with a lot of the students that might be here from abroad, too. I want to have a conversation and say: ‘You’re getting a great education here. As you consider what you might do after graduation, have you considered sticking around and trying to find a position somewhere within the Garden State?’

We’d love to have those conversations. Part of the calculation with sectors and markets is being cognizant of the fact that we have these populations in the state and figuring how can we leverage that to our best advantage. I think we’ve got a lot of good opportunities.

ROI: The point often is made that states can build their international business ties domestically — working with companies already here. What opportunities exist within the U.S.?

DC: There are a lot of international companies who already have a headquarters here — many outside of New Jersey — and we certainly can have those conversations when we see them at various international trade shows and things like that. But a bigger opportunity exists in the expansion of companies already in our state. Trade experts have shown that the investments of companies already here can be much higher than those you are trying to bring here. If you have a BASF or a BMW in your backyard — and I just mention them because we do, along with a number of international companies — we can go to them and say: ‘How are things going here in the Garden State? We’re thrilled that you’ve been investors in this state for decades. What are your future expansion plans? And might there be something that you might consider for New Jersey?’

Frangione to serve as Murphy’s acting chief of staff