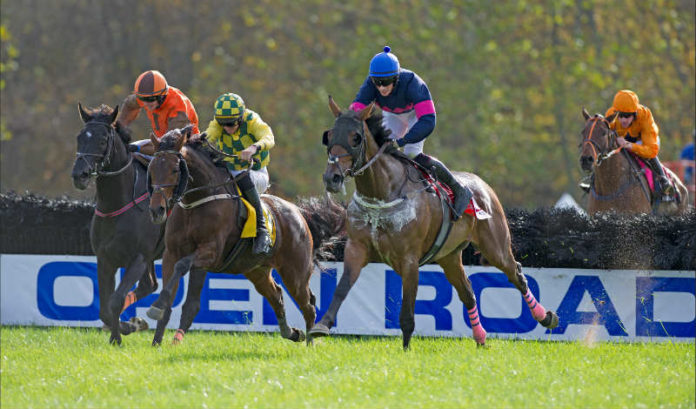 The Far Hills Race Meeting, the annual steeplechase event that raises money to support local health care initiatives, will be held on its usual day, the third Saturday in October, this year. The 2019 event falls on Oct. 19.

Guy Torsilieri, the longtime chairman of the event, said this year will mark the first race of a three-year arrangement to raise money for five charities connected to nearby RWJ University Hospital Somerset:

Peapack-Gladstone Bank and Open Road Auto Group are the lead sponsors for this year’s meeting, the 99th edition of the event.

Torsilieri said he hopes to top that number through ticket sales, food and merchandise sales and pari-mutuel betting.

“Our mission is to support health care in the region and run an equestrian steeplechase event,” he said. “We’ve raised more than $18 million in our history.”

Much of money has went to RWJ University Hospital Somerset, a longtime partner that has named its cancer facilities in Somerville the Steeplechase Cancer Center.

Torsilieri, who also serves as the president of the National Steeplechase Association, has been chairman of the Far Hills race for more than a dozen years — and has been coming to the race since he began as a volunteer in 1979.

ROI-NJ caught up with Torsilieri to talk about the event. Here is a bit of the interview, condensed for clarity.

ROI-NJ: Talk about the mission of the organization?

Guy Torsilieri: We’re a 501(c)(3). Our mission is to run equestrian steeplechase events and support health care in the region. Our mission was made to be broad on purpose so that we could give money to a number of organizations.

We partner with Robert Wood Johnson University Hospital Somerset and we were trying to figure out how we could be more impactful in the community, because we’ve had this long, long relationship with them.

RWJBarnabas (Health) is one of the largest, if not the largest employer in the state of New Jersey. And we just wanted to get down to sort of like the grassroots of how we could help people. We weren’t interested so much in bricks and mortar anymore. We were more interested in programs that impact people.

ROI: Talk about the five charities you selected — and how you will eventually select others?

GT: They all provide health care or give back to the area that they’re in. We will reconvene at the end of our second year going into our third, because we’ve already had a couple of requests from other local charities. But they all have a health care component to them. They’re all local to our community and they’re all incredible organizations that provide a wonderful support to our local residents.

ROI: Talk about the event for those who are not familiar?

GT: We’ll have anywhere from 30 to 40,000 people attend. The first race goes off at 1 p.m. and then races go off approximately every 45 minutes after that. It’s an international event. We’ll have 10 or 12 horses that are going to be flying in from England, Ireland and France to compete, so it’s a very prestigious event in the steeplechasing world.

ROI: All of this begs the next question. Is there gambling?

GT: We partnered with Monmouth Park last year for the first time and we’ll be doing pari-mutuel wagering again this year. We were very happy with the results last year. It just adds a great element to the event. And with purses that large, you really need to have a betting component on it.

ROI: That being said, it’s still billed as a family and corporate event, correct?

GT: Absolutely. We have a family area, we’ll have food trucks and a vendor village, so there’s a lot going on. It’s a great way to spend an afternoon.

ROI: Talk about individual tickets and group tickets for companies?

GT: Tickets are $100 prior to the event, $200 at the door. So, we want you to buy them in advance. We also have corporate tent packages and private tailgate areas.

GT: Absolutely. Depending on the size of the group, we could accommodate them in a variety of different ways, We have the ability to enlarge the exclusive chairman’s pavilion, where tickets are $750. And we are opening up some other areas where you could support a corporate tent.

ROI: Finally, what time do people start showing up — traffic is always an issue?

GT: Gates open at 8. And the people who have been coming here for years know to get here early. There are some traffic issues, but there’s also traffic issues if you go to a Giants or Jets games. But we have great relationships with the local police departments, so we have a lot of people helping us direct traffic.

Quest announces board changes, including exit of lead independent director