Home Industry You may not know Malt Products’ extract, but if you’ve had vegan...
Facebook
Twitter
Linkedin 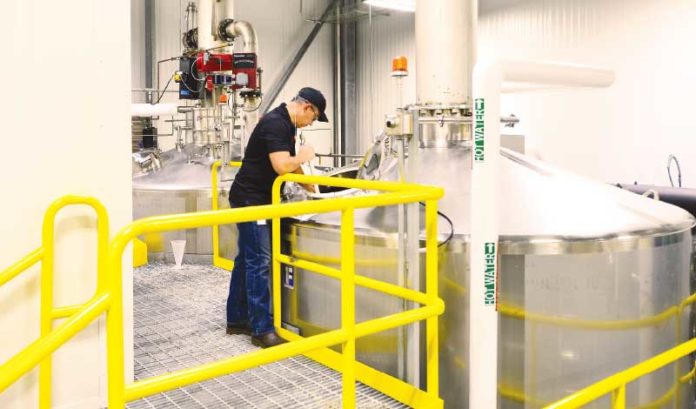 Amy Targan, president of Malt Products Corp., admits herself she doesn’t know what they’re usually referred to as.

But she knows better than anyone what’s in them.

Products such as the Beyond Burger and the Impossible Burger have hit mainstream appeal, and many big food businesses are hastening to introduce their own version of these vegan sandwich patties.

And, whatever they’re called, almost all of them use malted barley extract, which Malt Products manufactures.

“For fake beef, it’s often an ingredient because there’s a browning effect it helps to provide,” Targan said. “Our product is used also to mask any of the off flavors from the pea or soy protein, aside from it making it look more like a burger by giving it a richer color as it cooks.”

Saddle Brook-based Malt Products is one of the many New Jersey companies in the food and beverage manufacturing space, which occupies a share of the state’s manufacturing sector that’s second only to pharmaceuticals.

Amid all that competition, the company is proving there’s no substitute for a successful niche.

Even with a product that few people have heard of, the company is now at the forefront of the so-called “clean labels” movement in the food and beverage sector with its extracts and other natural sweeteners.

“There has been a big move not to use high fructose corn syrup and not to use GMOs, so we have substitutes,” Targan said. “When companies are working to develop a new product in which they want to take out corn syrup, they can use our product.”

The company’s namesake malted barley product is made through a germination process that turns the starches in grains into a sweetener, similarly to how beer is made, but without the fermentation.

“We’ve been doing that since the business was started in (1957) by my father, who still comes to work every day at 92,” Targan said. “Originally, he sold the product to all the local bagel shops, Italian bakers and other small stores.”

Today, the company sells its ingredients globally. There’s a surge of demand for it in a wide range of food and beverage products — everything from organic ice cream to the now-popular fermented drink kombucha. One of its fastest-growing segments is an extract that’s being used in oat milk.

When the company started to scale up its production, it outgrew its original New Jersey manufacturing facility. The company kept its main hub in Saddle Brook, but Targan said much of its production has been moved from Maywood to Dayton, Ohio.

“Besides it becoming difficult to expand in Maywood as the area become more residential, we were also moving to be closer to the grain in Ohio,” Targan said. “With development taking away farmland, grain stopped being on the East Coast and moved farther west.”

The manufacturer still supplies a number of New Jersey food and beverage companies with its ingredients, and Targan said most the company’s executives remain in the Garden State. The manufacturer has about 200 employees total, with around 30 high-ranked staff in New Jersey.

Even if the company manufactures ingredients that don’t always have name recognition, their uses are broad enough that they have some sizable competitors.

“But, I think what sets us apart is that we’re very flexible,” Targan said. “It doesn’t take us long to notice a trend and move toward it. I think that versatility means we’ll always do well.”