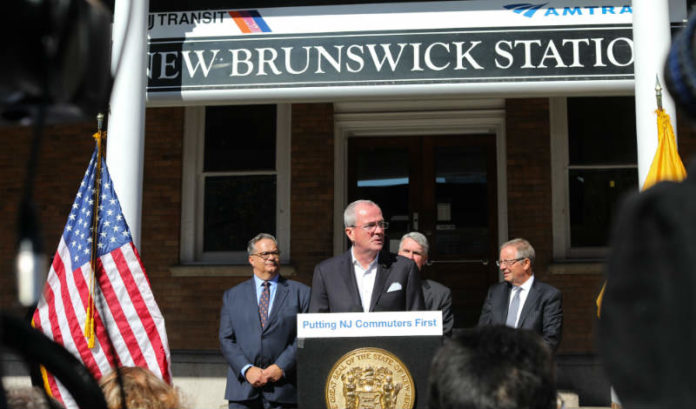 After it was over — after Gov. Phil Murphy had announced a “new era of cooperation” between Amtrak and New Jersey Transit, one that will start by bringing much-needed improvements to four key rail stations in the state, longtime friends Tony Coscia and Kevin Corbett had only one disagreement remaining: Just how bad things had gotten between the two transit organizations they head.

Coscia, the chairman of Amtrak, was more diplomatic.

“There was a period of time when Amtrak and New Jersey Transit were really not on the same page,” he told ROI-NJ. “In a way, they kind of viewed themselves as being in a zero-sum game where the cooperation would come at a cost. So, they tried not to cooperate.”

Corbett cut straighter to the point.

“There was hostility when I came in,” he said. “Open warfare, really, between the two agencies.

“You had that first ‘Summer from Hell’ on top of the fact the previous administration refused to pay where they were contractually obligated to pay. And then Amtrak, logically, starting to pull back on projects, saying, ‘If you’re not going to pay us, we’re not going to do the projects.’

“It’s one thing to have disputes at a high level, but when it really gets down to the rank-and-file people, it really started impacting operations.”

Those days, both said, are gone.

On Tuesday afternoon, standing in front of the New Brunswick train station, Murphy announced that all sides had put aside their differences and will begin making improvements in New Brunswick (extending the platform and eventually building a bridge across Route 27 to the RWJBarnabas Health wellness center), Elizabeth (an overhaul of the station on both sides) and Princeton Junction and Trenton (where ADA compliance upgrades will improve the overall look).

“Both Amtrak users and NJ Transit riders will begin to see a series of significant improvements, both on the platforms and in the stations, that will make access easier, waiting more comfortable and enhance safety and ADA compliance,” he said.

What wasn’t as visible was the behind-the-scenes talks between Amtrak (which was owed money by NJ Transit) and NJ Transit (which was being denied approvals by Amtrak, which is essentially the landlord of the rails.

Coscia and Corbett said talks picked up since the sides made a smaller announcement in February — and gave Murphy credit for starting them.

“He got the people at the top to start being rational,” Corbett said. “He said, ‘We know we need to have Amtrak and New Jersey Transit investing as quickly and as much as we can into the Northeast Corridor.’

“When you look at where our problems are on the Northeast Corridor, the stations are one thing, but it really gets into having that cooperation on the infrastructure.”

Coscia saw the bigger picture, too.

In fact, he sees New Jersey as a model for Amtrak across the country.

“We’re replicating this idea of partnering with the states where we operate our business, because we think that’s the future of Amtrak,” he said. “Our ability to expand and create a national model of city pairs is something that is only going happen if we have effective partnerships. So, we had to find a way to sort of create a new operating model where we kind of consider them our partners.”

It wasn’t easy to get to that point, Coscia said.

“New Jersey was a classic place where it had really gotten bad,” he said. “They owed us a ton of money, we owed them all kinds of approvals and signoffs. And it just was sort of one of these things where cooler heads prevailed.

“I think the governor deserves credit for it because he basically said, ‘This problem is bigger than both of us and we’ve got a better chance of solving it together than we do independently.”

It’s also not going to get solved without financing.

Corbett said that’s not an issue here. He said funding for the station projects was approved years ago.

“This is pre-(President Donald) Trump money,” he said. “We’ve had these commitments, these FTA grants. It was money from when they still had earmarks. We’re not getting those kinds of numbers anymore, but we had the full-funding grant agreement signed, we just couldn’t execute.”

The bridge, meanwhile, will be paid for through a cost reimbursement agreement between NJ Transit and the New Brunswick Parking Authority, which was originally signed in March 2014 and then extended this March in an agreement signed by Corbett.

Tuesday’s announcements only can spur hope that such cooperation can lead to the announcement of the grand prize project: the Gateway Tunnel.

Coscia, who said he has seen representatives from New Jersey and New York become greater partners in that push, keeps holding out hope.

“I think you now can make a pretty good argument that, candidly, the two states are driving to get it done,” he said. “And that wasn’t always the case.”

For Coscia, Tuesday’s announcement was an example of partners coming together for a common good.

“What we’re doing today is saying these four stations are things we should be doing, because it affects both of us,” he said. “It just requires people focusing on it and not viewing it as if you do something good for one, it’s bad for the other. It’s good for both of us. We just have to have a conversation.”

United to offer nonstop service to Croatia out of Newark