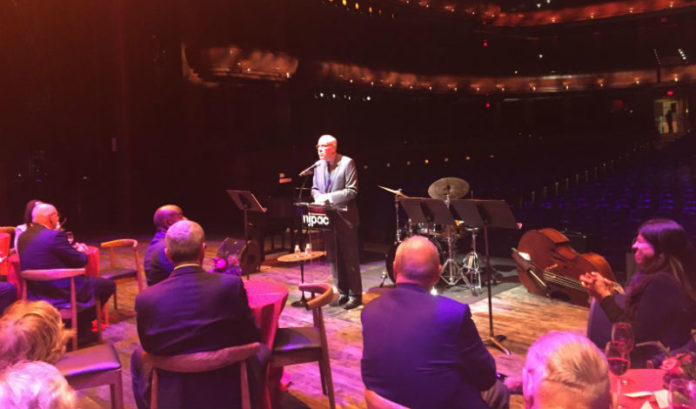 As he neared the end of his impassioned plea to the invitation-only crowd in the room, New Jersey Performing Arts Center CEO John Schreiber summed up the dreams and desires of the state’s premier arts institution by telling the story of an interaction he once had with one of the greatest jazz musicians: Thelonious Monk.

“He once told me a note can be as small as a pin or as big as the world — it all depends on your imagination,” Schreiber told the audience of approximately 100 Tuesday night on the main stage of the venue.

“Similarly, an arts center can be a stage and some chairs, or it can be something bigger. It can be a center for education, for culture in the community. It can be a wellness center and a force for economic development. It can be a beacon of civic pride and an anchor institution for a great city and a great state.”

NJPAC has proven to be all that for Newark and New Jersey since it opened in 1997. Tuesday night’s event was held to announce and celebrate a milestone moment in the center’s current capital campaign.

In just year two of a five-year program entitled “All Together Now: The NJPAC Changemaking Campaign,” NJPAC has raised $100 million toward its goal of $175 million, thanks to an anonymous $10 million gift this week, Schreiber said.

The biggest gifts to date are from Toby and Lee Cooperman, Prudential Financial/the Prudential Foundation, Lizzie and Jonathan Tisch, the Ryan family and the Women’s Association of NJPAC.

The milestone helped cap what has been one of the best years for the center — one in which it had a budget surplus for the fifth year in a row and record-setting attendance.

“More children and families served, over 100 active community partners and counting, not to mention over 200 community engagement events throughout greater Newark,” Schreiber said. “In other words, this is not an institution that’s getting complacent.”

Contributions already gathered in the campaign will help do just some of the following:

Schreiber said these types of programs and initiatives will help NJPAC fulfill its mission of being more than just an arts center.

“An anchor cultural institution like ours is honor-bound to reflect the community we’re serving and the world in which we live,” Schreiber said. “And that community, like our world, is always changing.

“Our founders were intentional about creating a world-class performing arts center that would be a nimble and responsive resource on a local and statewide level. We’re not reinventing that mission. Instead, we are honoring it — by delivering on the founders’ vision in news ways that continue to surprise.”

Newark Mayor Ras Baraka said the impact of the building — one he once admitted he questioned — cannot to be overstated. And he boasted how important it was for Newark to recently be named one of the country’s most burgeoning arts communities in the country.

“Collaboration and the arts is the secret sauce,” he said. “If we collaborate and do something for arts in this city, there’s no stopping the trajectory of where Newark can go.”

He lauded how New Jersey became the first state in the country to have 100% universal access to arts education in every public school.

“We take the arts extremely seriously,” he said. “We believe with all of our hearts, as the arts goes, this state goes.”

Schreiber thanked the work of NJPAC’s volunteer leaders, including board co-chairs Barry Ostrowsky and Steven Goldman, as well as Women’s Association President Marcia Brown and board member Marc Berson.

Schreiber said he hopes they — and others in the room — will help generate more support in the coming months and years.

“There’s no shortage of imagination in this room,” he said. “For the past 22 years, all of you have shared in a bold vision for what this place can be. But, more than imagination, you have the commitment to turn that imagination into something real and lasting and impactful on the lives of so many.

“And, so, I ask you to reaffirm that commitment. I ask you to help grow our impact, expand our reach and redefine what it means to be an arts center. So, put another way. I ask you to join me as leaders, as committed stakeholders, as best friends and partners in playing one note. One big note. All together now.”

SBA event to discuss ease of getting small business loans