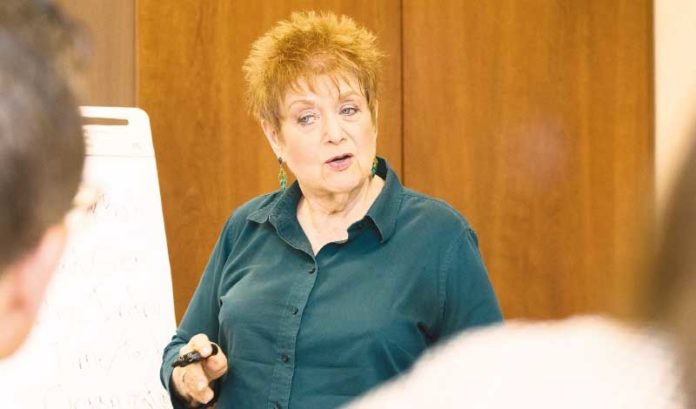 Laurel Bernstein said the No. 1 complaint she hears from women business owners is that there is not enough time to work on one’s business while working in one’s business.

But the New Jersey Association of Women Business Owners’ Mentoring Circle in Hillsborough guarantees just that.

“The circle guarantees that you will complete one project in your professional life that you’ve been delaying or have not yet been able to do,” said Bernstein, founder and owner of Laurel Bernstein and Associates, an executive coaching firm with offices in Montclair, New York City, Boston and Westchester, New York.

NJAWBO has been offering the seven-month program for nearly a decade, designed for six to 12 participants to meet once a month for three hours to tackle various projects in their respective fields.

“We encourage our members to find ways of attacking and getting something done in a way that gets them energized and looking forward without worrying about what’s still lingering in the background,” Bernstein said.

“Because most of my career and network was in New York City, I always had this idea that perhaps New Jersey wasn’t sophisticated enough for me in comparison, until someone said, ‘Well, you haven’t yet gone to a meeting at NJAWBO,’” she said. “By the end of my first year with NJAWBO, I had eight referrals that turned into closed business, so I became a big fan.”

However, Bernstein said she quickly realized how little the organization’s members knew about the benefits of mentoring, when, according to the Harvard Business Review, business owners who join a mentoring or mastermind group often earn up to 20% more than those who do not.

“They often did not know how to go about choosing the right mentor, and then, once they found a good one, they didn’t know how best to maximize the use of that relationship by making it bidirectional,” Bernstein said.

Bernstein said she therefore decided to create the Mentoring Circle, a program she had developed nearly five years earlier in her career, at NJAWBO in 2010.

“I wanted at least 12 people to spend a period of time working together and learning how mentoring works,” she said. “During the process, they also would have partners keeping them accountable for accomplishing one task in their professional environment that they perhaps were procrastinating on or didn’t know they should be doing in the first place.”

It worked so well that Bernstein said six of the 12 original members still meet once a month over a video call, despite having dispersed or moved on to other roles.

And, to date, dozens of NJAWBO members have found success by participating.

“We had one woman with an appointment setting company for salespersons in large organizations,” Bernstein said. “As a result of the Mentoring Circle, we got her to think a lot bigger, and, in 2006, she actually made it on the cover of a national publication as an innovator in her field.

“Another woman, the daughter of the owner of a title insurance company, openly told us she never would become CEO because she was too young. Within 19 months, when her father retired, she was named CEO, and, nearly 10 years later, she has tripled the business.”

The format is rather simple, Bernstein said.

“During our first meeting, I ask, what are the things we would like to cover — things that each member feels they want to learn more about in relation to their professional life?” she said. “We create a list of nearly two dozen topics and narrow it down to six. Then, over the next six months, we cover each one of those topics in a meeting. We pair members up and assign one of those topics to each pair, so they either need to find an expert to come in and talk with the group or do their own research and give a presentation.

“Anyone whose professional goal is on that topic then launches their project that day to get the most benefit from their expertise, while receiving ongoing information and coaching from everyone in the room as well as perhaps the invited expert.”

With Bernstein monitoring every meeting, each participant also gets the opportunity to have their strengths assessed by an executive coach so they can better use the abilities they’re already good at and may be underutilizing.

“The No. 1 thing that people often need the most guidance in is understanding the how and why of digital marketing,” Bernstein said. “I also think people often have traditional ideas of their target markets without having an open mind to who else might be interested in their goods or services. Lastly, there still exists difficulties in communication between millennials, Generation Xers and baby boomers.”

Though the environment remains professional, Bernstein said it also is very laid back.

“People come in jeans to be candid and trusting because we keep everything confidential,” she said. “You have a number of people being supportive of the things you are trying to accomplish in your professional life, giving you ideas, perhaps even giving you hands-on help, and it’s an in-depth way of creating objective professional relationships.”

But one thing the Mentoring Circle will never do is give advice, Bernstein said.

“We only provide choices that we know will work so that individuals can make the decisions most comfortable for them,” she said. “We don’t believe in pushing ideas on someone that they can’t or won’t do. They must make the choice.”

To participate, one must first join NJAWBO and then pay $99 for the program. Both women and men are invited to participate.

“We have men who join NJAWBO for the exclusive networking,” Bernstein said. “For example, there is a man who renovates kitchens who comes to every meeting, because women often are the decision makers in the home.

“Over the years, mostly women have participated in the Mentoring Circle, but the circles that did have one or two men in them were really quite wonderful.”

“But, what we always try to do is have a couple of supplemental meetings, so that if a member can’t make a certain date, they won’t miss out — they’ll simply get a condensed version of what happened,” Bernstein said. “All else considered, if you have any project in your professional life that you feel you’ve been procrastinating or has felt too hard to tackle, from the pile of papers on your desk to getting promoted in your company, the Mentoring Circle will give you the opportunity to realize your goal.”

Laurel Bernstein’s career in management consulting, human resources and project management has lasted more than four decades, including with companies such as the Taproot Foundation, Standard & Poor’s and the American Institute of Physics.

“My job often was to start departments within large organizations, going around finding those who could be retrained to fulfill a new need and getting new departments up and running by purchasing equipment, hiring managers and staff, and watching the departments work for a couple of years to make sure they were running smoothly before I moved on to the next,” Bernstein said.

“That’s when I began to realize that executives were trusting my strategies to ensure their own growth.”

When an enlightened manager said he’d be willing to pay Bernstein’s tuition to be certified in this kind of work, Bernstein graciously accepted and worked in-house for two years before founding her own business in 2007.

“We now provide executive coaching for owners of small businesses and leaders in large organizations that want to maximize their organizational effectiveness,” Bernstein said.

Laurel Bernstein and Associates works with companies with revenues between $500,000 and $10 million, helping business owners and their staffs to create and implement strategic plans to explore more earning opportunities.

“And I, too, have a mentoring circle at my business, of which more than 160 have participated, but seeing as it often is full, I now have a waiting list,” Bernstein said. “That is why I’m always trying to get other organizations to offer mentoring circles to help maximize the benefits for their members — because that is absolutely something I could help start up.”

Officials tell interfaith celebration that N.J. must be a welcoming place...