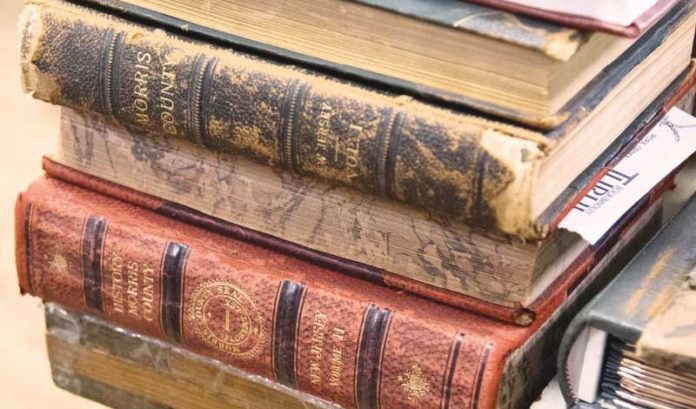 Turul Bookbindery in Wharton is one of the last remaining hand binderies in the nation.

That’s because Michael Rahill said the business has reinvented itself many times over.

“Today, we focus mainly on antique book restoration and the creation of custom books,” he said. “That is where we’ve found more of a profit margin and less competition — plus, it’s more enjoyable than production work.”

Rahill said that, as third generation of the family business he runs with his mother, Margit Rahill, and his father, Mike Rahill, his title would be something along the lines of vice president.

“However, I also could be the janitor, the delivery guy — you name it,” he said.

Everything about the business requires patience and commitment, but Rahill said he is not about to be the one to let his family’s legacy end.

The family’s history is one for the books itself.

After learning the trade of bookbinding in Holland, Rahill’s grandfather, Lajos Gregorencsics, opened a bookbindery in Hungary in 1932.

“That’s what they did back then,” Rahill said. “Repair was the way. You never, ever threw anything out.”

Then, during World War II, Gregorencsics and his wife helped provide cover for Jewish families in hiding. When Hungary was no longer under Nazi occupation, the Communists then came to power, with a Russian tank even driving into the bookbindery at one point.

In 1956, with the Hungarian Revolution rising, Gregorencsics decided to cross the border with his family to a temporary refugee camp in Austria before emigrating to America to meet his brother in Queens.

“They started working odd jobs as refugees and toward becoming citizens,” Rahill said.

Four years later, Gregorencsics reopened the bookbindery as Turul Bookbindery, with Turul being the name of a mythical bird of prey and the Hungarian symbol of freedom.

Gregorencsics would relocate the business to New Jersey in 1971 and build a custom bookbindery in 1975, at which the business remains today.

Turul Bookbindery has offered many different services over the years, often changing with the times, the economy and technology.

“For example, at one point, we had gotten into production work printing paperbacks, but then the market shifted, with people farming out work to foreign companies that could make them cheaper,” Rahill said.

While the bookbindery still does a limited amount of copying and printing, gold and foil stamping, and die cutting and embossing, its focus today is mainly the restoration and repair of antique and rare out-of-print books, Rahill said.

“We vary our technique based on the time period a book originates from,” he said. “While some people keep their books primarily for sentimental value, we always attack a project as if that customer is going to sell it down the road, matching the style of binding and material to that which was used at the time of production.”

While Turul Bookbindery has restored bibles dating back to the 1400s, books for the restoration and rededication of Ellis Island, books for the French Senate of Paris, displays for the Nobel Peace Center in Norway, and historical music scores for Yale University, Rahill said one of its most challenging projects to date was reversing a previous restoration process of a historical book for Bergen and Hudson counties.

“All the pages were encapsulated in silk and the process was found to have damaged the pages over the years,” he said. “They wanted that undone and the book rebound to look old, which took months to complete because each page of nearly 1,000 pages had to be redone by hand.”

“The cost changes, as every case is different,” Rahill said. “Our pricing is similar to that of an auto body shop — we look at the damage, we factor in the materials needed and the hours involved to repair, and we quote based on that.”

“We also now utilize the fact that people can publish their own books using a home computer, whereas previously, they would have to do so at a publishing house,” Rahill said. “However, they often can’t take that last step at home — manufacturing their work into a properly made book. A Michaels craft store might also say they can do this, but it most likely will be simply glued and hastily assembled.

“Our books are hand sewn to last 50 years or more.”

Though the bookbindery currently only employs three (and only family), Rahill said the business may soon hire one or two additional staff members to take on the more menial tasks of the business, such as answering phones.

“Our experience and the ability to complete a project properly is where our cost comes from,” Rahill said. “We need a certain amount of space and machinery when we are not doing full-on hand binding, and restoration also takes time and specialized labor, with the costs being higher when paying a trained person versus someone who is untrained.”

You get what you pay for at Turul Bookbindery, though, Rahill said.

“For example, when we have to custom match leather, we actually send someone to a leather supplier to hand pick the leathers that will best match your job,” he said. “We don’t just order online and have a supply sent to us.”

Rahill said it doesn’t always take on customers, either.

“If you were to sell a book in Europe, restoration may not necessarily kill its value, but in America, restoration often can negatively affect its value,” he said. “So, we ask our customers, is the book in shambles and at risk for loss of material? Then, yes, restoration would help. But if a book is simply damaged, yet still able to be thumbed through, we steer customers away from having us do any work.

“We are extremely honest and upfront at the risk of not making any money off a project, but because we always do what is in our customers’ best interests, that is why they keep coming back.”

When it comes to gaining new customers, Rahill said branding can be difficult.

“The challenge lies in explaining to people exactly what we do,” he said.

Though Turul Bookbindery continues to advertise on networks such as CNN and The History Channel, Rahill said its biggest asset has been the internet, especially Google and Facebook — but a backlash against technology has been helpful to them as well.

“For example, with the internet being slanted by various people, historical documents are used to provide facts,” he said. “Therefore, people tend to like historical books for research purposes.

“We also create books that are tamper-resistant for corporations, law firms, religious organizations and the government, so that even when most of their documents are online, they have a backup in a secure, bound book.”

Rahill said people are even moving away from e-books.

“After their eyes hurt from sitting and staring at a computer all day at work, they just want to lounge back in a comfortable chair and read an actual book,” he said.

“We’ve seen that as textbook costs continue to rise, textbook rebinding is becoming a lucrative market for us again,” Rahill said.

Though there is always work to be done, Turul Bookbindery has decreased the number of jobs it takes on.

“However, we’ve still grown our profit margins by focusing more on antique book restoration and the creation of custom books,” Rahill said.

Rahill said he would like to open a second bookbindery in South Carolina, where he currently resides and commutes from in order to keep his family’s bookbindery in Wharton going.

“The second location will focus on the historical natures of places such as Charleston, South Carolina; Georgetown; Washington, D.C.; and Richmond, Virginia,” he said. “We currently do work for people all over the country, but with the South’s respect for history, that may go a long way in keeping us alive for years to come.”

That’s a goal Rahill said he doesn’t intend to quit on.

Despite growing up at Turul Bookbindery, Michael Rahill said he earned a college degree in criminal justice.

“I was going to become a police officer, but when I was offered a job, the pay did not match the income that I needed in order to keep my house,” he said. “The family business, however, was able to provide me with that.”

Today, Rahill also serves as a firefighter in South Carolina, commuting back and forth from the Southeast to the Northeast to handle his customers in New Jersey and New York.

“We have clients who expect to see me on a regular basis,” he said. “I actually go to their facility and do the work because the books cannot be removed. That is my forte in the business — promotion and the types of jobs that are done off-premises.”