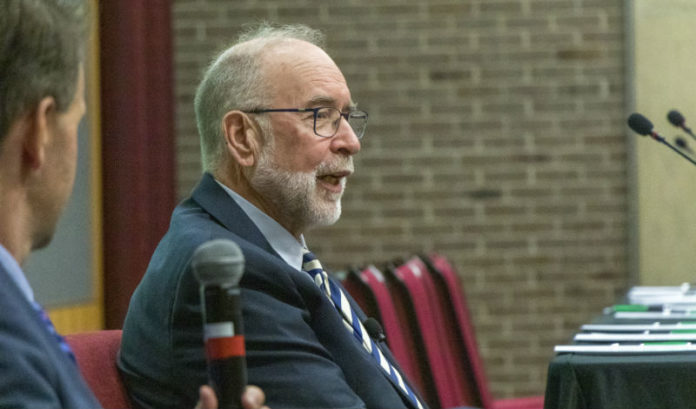 It has the second-highest number of residents — and jobs — of any county in the state. It has the fifth-youngest median age and a population where 42% have a four-year degree or more and the median household income is just over $85,000.

And then there’s this: Middlesex County counts 51 different languages that serve as the primary voice in their respective households.

Simply put, Middlesex County has a workforce that is young, diverse, well-educated and reasonably compensated: Those are the findings of the Middlesex County Economic and Workforce Competitiveness Project completed by Rutgers University professor Carl Van Horn and presented recently at the county’s annual Business Summit.

And, while Van Horn told the audience these findings are enough to make many counties rest on their laurels, he knows the leaders in Middlesex are hoping to use them as a jumping-off point to continue their desire to create the work-live-play environment of the future.

“I think they already know about a lot of its assets, but you can’t rest on that history,” he told the audience. “So, the question is, ‘How do you go forward?’”

In a way that benefits everyone, Van Horn said.

“This is really one of the best labor markets you can possibly imagine in the sense that the state has the lowest unemployment rate in 50 years,” he said. “So, it’s particularly a time when you say, ‘What about the people on are on the sidelines who are not being brought in?’

“What we concluded was there are a number of ways in which the county could strengthen its position already to meet those challenges.”

Here are some of the suggestions produced by the report, which was produced by Van Horn with the assistance of Maria Heidkamp, Liana Volpe and Stephanie Holcomb:

The study, Van Horn said, noted that Middlesex County has numerous economic development attributes and assets that other counties across the state and the country would love, including:

All of this, Van Horn told the audience, bodes well for the county in the future.

“The job projections for the county over the next decade are about 300,000 net increase,” he said. “This is a county that’s growing and it’s growing fairly rapidly — and it is also growing in those areas there that are more likely to be successful in the jobs in the future, which is, of course, education and medicine and and pharmaceuticals, but also in the warehousing, transportation, logistics and environmental areas.”

Middlesex County, Van Horn said, is finally benefiting from what has been a long transformation.

“In some ways, you could say that we went through that pain of shedding the jobs that are no longer part of the modern economy several decades ago,” he said. “Those of you who’ve been in Middlesex County a long time remember we used to have a Ford Motor plant in Edison. Well, we don’t have it anymore, but, in some ways now, that’s probably good because we’re not going to lose those jobs that are going into other countries.

“We’ve replaced those with other kinds of jobs, and not just working in Starbucks. We have a lot of very high-paying jobs and a lot of growing jobs. So, I think we’re better positioned to weather the next recession, which will come, but also the future growth in the tech sector.”

Van Horn warned the county faces as many challenges as opportunities.

“It also very highly educated county relative to both the state and to the country and general,” he told the crowd. “That said, there are also people in Middlesex County who need help to enter to the labor market. They may have not finished high school, they may have been formerly incarcerated, they have some credits, but no degree.

“So, in order to catch up with the changing economy, they’re going to need assistance. So, it’s a picture of both, a very strong county and also ones where we think there’s some significant interventions that would help advance that even further.”