National rent prices have declined for the first time in more than two years, according to RENTCafe‘s September Rent Report.

The decrease was seen for the first time since February 2017, dipping by 0.1% or $1 from August to $1,471 in September. Although the decrease may seem small, a slow year-over-year hike (3.2% or $45) points to a wind-down in rent prices, according to Yardi Matrix.

As for New Jersey, the state’s largest cities (and some of the most coveted to rent) are seeing monthly drops and generally have an asking rent higher than the national average, the report found.

Iselin has the fastest growing rents in September, where apartment prices were up by 1.6% or $26 month-over-month. New Brunswick came in second, jumping by 1.4% or $25. East Brunswick saw the largest decrease, 2.1% or $33, when compared to August. 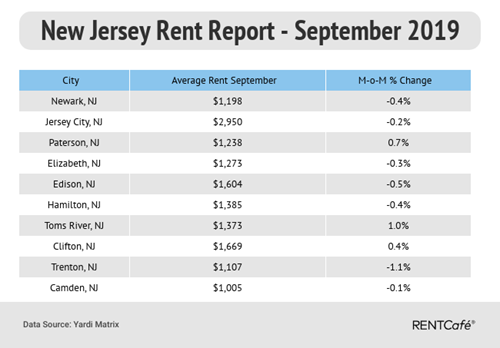 Of the cities analysed, here are the most notable changes in New Jersey’s rental market: