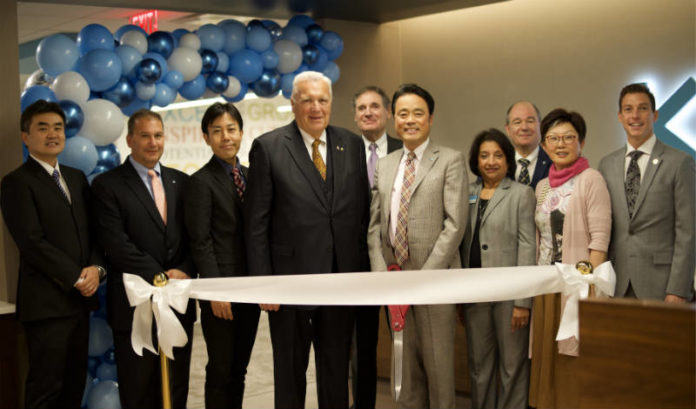 Kumon North America Inc., the giant after-school educational company, has moved its U.S. headquarters from Teaneck to Ridgefield Park, cutting the ribbon on a newly renovated property, it announced Wednesday.

The North American business unit, which now has 19 local branch offices and more than 1,500 learning centers nationwide, started in Larchmont, New York, in 1974, then established its offices in Los Angeles in 1983. It opened its first headquarters in Fort Lee in 1992, moved to Teaneck in 1995 and now has moved to Ridgefield Park.

“Kumon’s growth is constant and would not be possible without dedicated associates and instructors across the world,” Mino Tanabe, president of Kumon North America, said in a prepared statement. “We are proud to provide a comfortable and technological environment that can keep up with our growth, while continuing to inspire children across the United States, Canada, Mexico and Panama.

“Our new headquarters will, without question, allow us to prosper and grow, ensuring our future for another 50 years, another 100 years and beyond.”

Tanabe took part in the ribbon-cutting ceremony, along with Ridgefield Park Mayor George Fosdick and more than 100 employees and instructors from all over North America.

“This new space for our headquarters will only further grow our impact across North America,” Tanabe said. “We will continue to work each day to achieve (founder) Toru Kumon’s vision of cultivating self-motivation and a love for learning in as many children as possible.”

The company, which says it is the world’s largest after-school math and reading program, got its start more than 60 years ago in Japan, and has 25,000 centers worldwide, with more than 2,000 in North America.

Burd to be honored by NAIOP with Industry Service Award