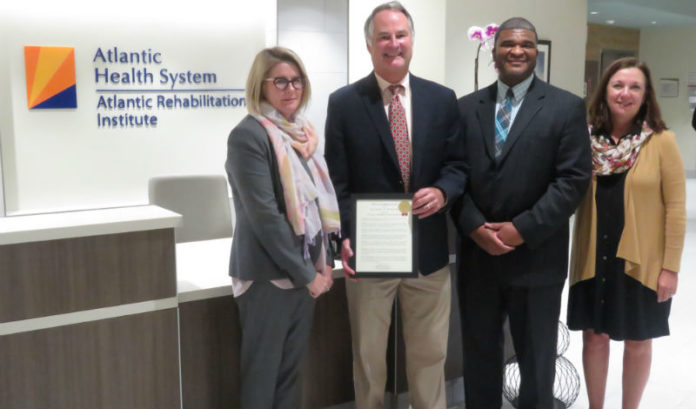 A new hospital has officially opened in Madison and is ready to treat patients, joint venture partners Atlantic Health and Kindred Health said on Tuesday.

“It is my honor and privilege to welcome Atlantic Health System and their partner in this project, Kindred Healthcare, to this beautiful site on Giralda Farms ⁠— the former estate of Geraldine Rockefeller Dodge ⁠— and the Madison community,” Conley said.

The $24 million, two-story, 38-bed hospital is the first standalone one to be built from the ground up by Atlantic Health, it said. It stands on approximately 46,000 square feet of land, part of a 40-acre parcel of the farm.

“The opening of the Atlantic Rehabilitation Institute here in Madison will provide accessible, conveniently located, innovative rehabilitative services to those in need. This facility will also be a tremendous economic asset as Atlantic Health continues to expand its footprint, providing the highest quality health and wellness services in the region. We look forward to building a strong community partnership with Atlantic Health now and into the future,” he said.

The building, which was completed in July, received final approvals from the state Department of Health in September, followed by an inspection and accreditation by the Joint Commission earlier this month, allowing for the hospital to admit patients.

“The work to bring this hospital to reality from the ground up, over little more than a year, has been driven in part through the enthusiastic support from the community,” Corey Cooper, executive director for Atlantic Rehabilitation Institute, said. “We are excited to finally begin providing a new level of rehabilitation care to patients in our region.”

The building was designed by Earl Swensson Associates and constructed by Holt Construction.