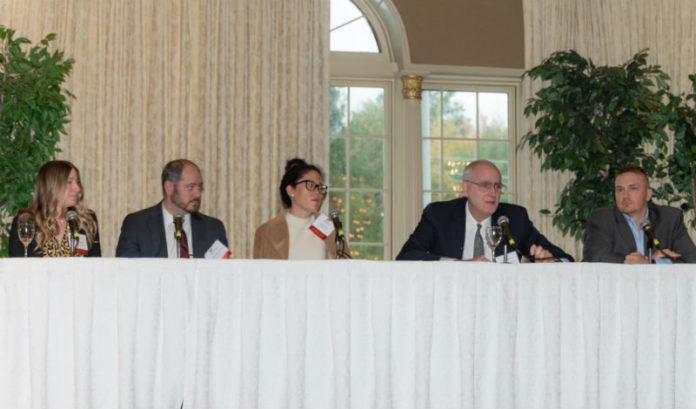 Eugene Gross said he believes healthy food and beverages do not have to be unenjoyable.

“We like to take everyone’s taste buds on a journey with new and exotic fruits from around the world, such as cherimoya from South America, mangosteen from Indonesia, jackfruit and prickly pear,” said Gross, co-founder of Altru Brands, a new plant-based flavored water and the first and only beverage to contain glutathione, the “master antioxidant.”

“We also aim to improve the quality of shelf life, so that, even within a certain time frame using plant-based ingredients, our product stays better and is better tasting than our competitors.”

Such innovation — a major topic of discussion last week at ROI-NJ’s inaugural Food & Beverage Innovation Summit — is key to any business, Gross added.

“Read scientific papers and medical journals,” he said. “There are new studies and research going on every day.”

Richard McArdle, executive director of the Rutgers Food Innovation Center, said he sees entrepreneurs like Gross at his organization every day.

“We also see many first- and second-generation immigrants from countries such as Serbia and Egypt interested in bringing their homemade foods to the U.S. market,” he said.

With Rutgers Food Innovation Center operating two incubator facilities in New Jersey devoted to food business development, workforce training and product commercialization, McArdle said he also gets a good sense of the trends to come — and the trends that will stay.

“Due to a rise in food sensitivities, we’ve seen as many as 11 different free-from foods and beverages,” he said. “And, as we come to better understand our own genetics, the tailoring of food for individual bodies is going to come to market in a very serious way.”

McArdle said he also spends a good amount of time talking about funding at his job.

“A lot of people just stop when they can’t find funding or when they hear that it is going to cost several hundred thousand dollars to get to the next level,” he said. “But, if we are going to rely on small businesses to create the innovations that many of us have talked about, we need to do more as a food community to help pull them through the system.”

Timothy Rankins Sr., a manager at EisnerAmper, said he helps calculate, substantiate, document and defend food research and development tax credits on behalf of his clients.

“But, because it’s a credit rather than a deduction, it is highly scrutinized by both the IRS and the Department of Revenue in New Jersey,” he said.

Nearly seven years ago, larger food companies started to claim the benefit, but with smaller companies now also realizing they are eligible, Rankins advised attendees to make sure they are prepared.

“If you are looking to claim these credits, using a project tracking system for engineers and research and development scientists is critical to both documenting and defending the credit with the Internal Revenue Service,” he said.

Clara Park agreed that, while innovation is a must, it can also be an extreme challenge.

“Certain grocery chains take their clean labels very seriously, so they might not even want a modified food starch or dry peppers because they have been irradiated,” Park said.

As corporate chef at Chelten House, a fourth-generation food producer in Swedesboro, Park said she often is asked to make complicated dishes with a strict budget and a list of ingredients she cannot use.

“We work with 90% of the top grocery stores in the country doing a lot of private label manufacturing,” she said. “But I just met with a grocery store buyer who liked a sauce and then said, ‘Sugar is the fourth ingredient.’ I replied, ‘If you look on the label, it says just 4% sugar.’ And he said, ‘My consumers know enough to read the label, but are too lazy to read to the bottom.’

“You have to manage expectations of what you know to be good and right and the conclusions consumers are going to jump to. For example, gluten is not poisonous, nor is it bad for you. Eating a Keto diet is not going to make you look like Halle Berry. But people have just enough information to consider themselves experts and that makes all of our jobs a lot more difficult.”

Estee Smoler, a registered dietician nutritionist and co-developer of the Nutrition Centers at Saker ShopRites, said that, while the grocer cannot carry every single trend at its store, she does try to pick those with scientific backing that are long-lasting.

“Everyone can agree on the fact that we want to be able to read the ingredients on our labels,” she said. “Everyone wants as little processed foods as possible, with all-natural ingredients and free from colorings, preservatives and any chemical additives, as well as allergens, because everyone in this room can say that they themselves or someone in their home has some sort of dietary restriction.”

Shopping for those with dietary restrictions can be overwhelming, especially when faced with thousands of options, so being an in-store dietician to help customers find what they need to be successful has been very fulfilling, Smoler said.

But innovation is rarely easy.

“Even though our customers are starting to know that we are raising the bar of what we carry in the stores, if a customer goes to a section where they think an item might be, if it is not there, many will think we don’t carry it, even if we do three rows down,” she said.

Bills legalizing recreational use of cannabis will not go up for...