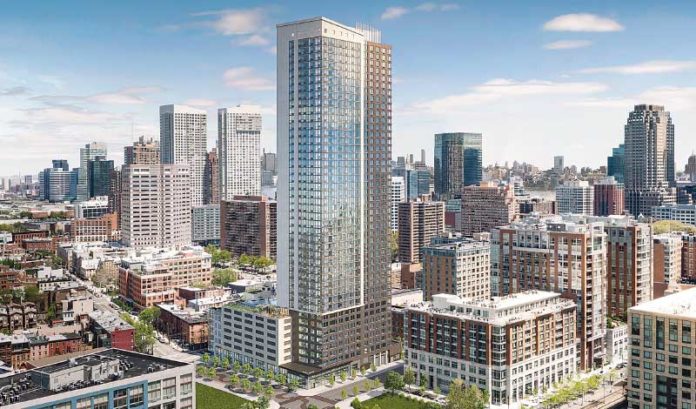 Like the other apartment buildings that rose 40-plus stories into the downtown Jersey City skyline before it, 235 Grand has developers boasting about views of neighboring New York.

What’s different this time is that, for nearly half of the residents in the new upscale development in Jersey City’s Liberty Harbor neighborhood, they’ll be looking at what used to be home.

“Almost 40% of our tenants so far have come from the five boroughs of New York,” said Jeremy Kaplan of the KRE Group, one of two developers on the project. “That’s considerably higher than we’ve had in the past. We usually average around 25%.”

Alongside the resurgence that many recognize as already underway in Jersey City, developers are finding that renters have a new interest in living in the area that doesn’t begin and end with the question of price.

For that reason, luxury apartment developments like 235 Grand aren’t counting on underselling Manhattan rents — they’re counting on people wanting to be in Jersey City more than the once-greener pastures across the Hudson.

“It’s to the point now where I don’t think if there was suddenly a change in pricing in Manhattan, with the price of every apartment falling 20%, that everyone in Jersey City would pick up and leave,” Kaplan said. “People here love living here.”

And 235 Grand, which KRE Group developed in partnership with Ironstate Development, is just one of many apartments that have been delivered in Jersey City recently. In fact, the city’s breakneck development pace has put it neck and neck with Manhattan in the race to add apartments to the tri-state area.

About 2,100 new units are estimated to come online in Jersey City this year, while Manhattan has 2,143 units entering the market, according to apartment search website RENTCafé. That’s at a time when, also according to RENTCafé, nationwide apartment construction is slowing significantly from the highs of 2017.

Jackie Urgo, president of The Marketing Directors, leasing and marketing agent at 235 Grand, said her company alone has been involved in the introduction of more than 1,000 units in Jersey City this year alone, including The Enclave, which has leased 85 percent of its 260 luxury residents since its May debut.

She’s been active in the Jersey City real estate market for 30 years. So, needless to say, Urgo has watched it mature over the years; she’s ecstatic about its current booming moment.

“Thirty years ago, there wasn’t a supermarket or any residential conveniences,” she said. “In terms of lifestyle, the city is now on par with many fashionable districts around Manhattan. It has earned a reputation as a destination that is comparable in terms of dining, nightlife and arts. There’s a real downtown pulse. And it’s very attractive right now to renters.”

The commuting options continue to be a primary draw, but Kaplan and other developers are hearing from renters that it’s not the only thing attracting them to Jersey City. The hub it’s becoming for restaurants and its art scene is noted just as often.

Over the past few years in particular, Jersey City’s building stock has developed into a first-class level of offerings for renters, Urgo said. New York’s new apartments and those in Jersey City often provide many of the same amenities to renters.

“When you see developers being so meticulous and bringing in higher-end interior designers than they were in the past, that escalation is a sign that the housing stock is increasingly getting better and better,” she said.

Urgo added that Jersey City also now has the advantage of an financial sector-dominant employment base and a growing creative class, which has brought residents of Long Island, Manhattan and Brooklyn around to the idea that living in Jersey City made sense.

While the Jersey City waterfront hasn’t been able to meet this new demand, facing a lack of available parcels of land, nearby neighborhoods such as Journal Square have welcomed the influx of apartment developers.

Some emboldened developers have even ventured into Jersey City neighborhoods where builders have rarely looked, such as Bergen-Lafayette.

When demand for apartment development along Jersey City’s waterfront was still a cresting wave, William Rosato rode it. But, now, Rosato, CEO and president of Alpine Real Estate Group, is more interested in bringing the tide to the Bergen-Lafayette neighborhood.

“I won’t say I was the first developer in this area, but I was among the first,” he said. “I like finding neighborhoods that are going to sprout up and bloom relatively soon. Given the hot market along the waterfront and in Journal Square, I thought there’s going to be some pressure for people to want to look for the same product at a lower cost.”

Rosato’s company is the designated developer on the first phase of what’s planned to be a 400-unit apartment development there. Construction is expected to be completed on the first 104-unit building, BeLa, later this year.

Rosato is expecting Bergen-Lafayette will appeal to renters in the same way other Jersey City neighborhoods have started to.

“It’s situated very well from an access to transportation standpoint,” he said. “Not only does it have a light rail that will take you to downtown Jersey City and Manhattan, but Bergen-Lafayette is right at an entrance to (Interstate) 78 and can take you to the Turnpike.”

As far as who is moving into this changing city’s neighborhoods, single young professional appears to be the demographic New York appears to be losing to Jersey City. But veterans of the local market have noticed that more families, particularly those with young children, are moving to the city at a higher rate today.

“Whether they’re single, young couples or empty nesters, once people move to the city, we’re seeing that they often remain there for a significant period of time,” Urgo said. “That’s a good sign.”

Reach The Marketing Directors at: themarketingdirectorsinc.comor 212-826-8822.

Nia named new CEO of Mack-Cali; Jones to take over as...