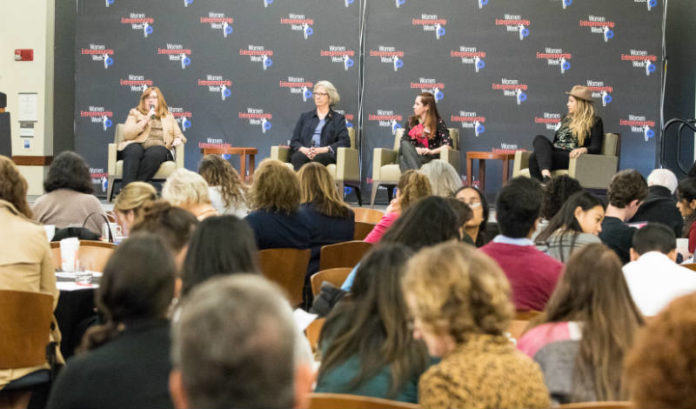 Carley Graham Garcia joined Montclair State University as the executive director of the Feliciano Center for Entrepreneurship and Innovation just eight weeks ago, after spending 12 years at Google working her way up from a senior sales representative to head of external affairs.

“But, when I announced my new position, I was surprised to see that just 23 out of the 61 messages I received on LinkedIn wanting to discuss future collaborations were from women, even though the majority of my network and mentors are successful women,” Garcia said. “Why is it that women do not feel more comfortable reaching out?”

Garcia, speaking at MSU’s signature conference for Women Entrepreneurship Week on Wednesday, told the more than 300 attendees that this realization was jarring.

“With just a small fraction of venture capital existing for female-started companies, we need to shine a light on women starting businesses who need not just funding, but also support, mentorship and enthusiasm from other women to help them succeed,” she said.

Women Entrepreneurship Week, first conceptualized by MSU in 2014, did just that by featuring the stories of more than a dozen women entrepreneurs — how and why they successfully started their growing businesses.

Both young and veteran speakers often said it was because they had no idea what they wanted to do after graduating college.

Lisa Hirsch said she had no intention of becoming the CEO and president of Accurate Box, a third-generation corrugated box manufacturer celebrating its 75th year in Paterson.

“My dad had a small packaging business that I had worked at during summers and I thought, let me just go work there for a year,” she said.

By 1997 she was the vice president — and her father was encouraging her to take over the business.

“I argued it for about eight months until he told me how important it was for the customers, the employees and the banks to see some sort of succession planning, because we were a very capital-intensive business,” Hirsch said. “Less than 3% of family businesses make it past the third generation, and I certainly didn’t want to be the one that screwed it up.”

Karen Kessler, president of Evergreen Partners, said the creation of her high-profile public relations and crisis communications firm in Warren followed her eclectic career working for the American Stock Exchange, for then-Gov. Jim Florio, and as commissioner of the New Jersey Sports and Exposition Authority.

“I started creating a network in college by discovering that everyone’s favorite subject was themselves,” she said. “If you ask to speak to someone and you are simply happy to listen to them talk, they’ll think you’re brilliant — and, the more confidence you display, the better people react.”

Kailu Guan, co-founder of HelloAva, said she came to the U.S. at the age of 18 to pursue a degree in fashion at Parsons School of Design, but took a break when she realized it wasn’t for her.

“Being a 20-year-old lost in New York City was one of the best things to happen to me,” she said. “My world was now open to all of these opportunities to explore as an artist.”

After an eclectic career combining augmented and virtual reality with fashion, a discussion regarding her own skin issues with her friend and colleague, Siqi Mou, resulted in the creation of HelloAva, which uses technology and partnerships with dermatologists and top brands to recommend beauty products based on the skin types of its tens of thousands of users.

Abby Taylor, co-founder and chief marketing officer of the Belmar-based Playa Bowls, said it was her passion for surfing and traveling that led her to become a multimillion-dollar franchisor of super-fruit bowls with more than 75 locations.

“I would travel and surf all winter and work all summer bartending to allow me to do that,” she said. “And, everywhere I went, I was eating and learning about superfruit bowls.”

When she told her friend and co-founder, Rob Giuliani, that she was still unsure of what she wanted to do for a career, he suggested she sell the superfruit bowls she had begun making at home — and, in just five years, what began as a makeshift sidewalk acai bowl and smoothie stand became a franchise employing thousands across 11 states and Puerto Rico.

“Developing the brand came easily to me because this was my life and I was able to share my story,” Taylor said. “That’s what people love being a part of.”

Darlene Gillard, founding team member and director of community at digitalundivided, said that, after working in the fashion industry for nearly a decade, the then-editor-in-chief at ESSENCE Magazine inspired her to start and run her own high-profile events and public relations agency for 13 years prior to founding digitalundivided.

“She called me into her office and said, ‘I’m leaving my high-profile, high-paying job today because I started my own growing business and the demands of this job has left no time for my daughter,’” Gillard said. “I wanted to follow her out the door because it was everything I wanted, too. She was smart, brave, she had hustle and she was creating her own life.”

Today, digitalundivided, an Atlanta-based incubator program with a new expansion in Newark, leads high-potential black and Latinx women founders through the startup pipeline — as less than 6% of female-founded startups are led by black or Latinx women.

Rachel Lyubovitzsky agreed that a great mission is a great place to start — and that is why EverythingBenefits in New Providence is growing.

“Hiring is the biggest challenge as an entrepreneur, especially with an extremely low unemployment rate,” Lyubovitzsky, co-founder and CEO, said of the automated benefits technology company that helps to uncover hidden costs and reduce errors for consumers while keeping companies compliant. “If the mission you have is something that helps everyone, people resonate with that, as well as the opportunities you create for them for professional growth.

Beatriz “Betty” Manetta, founder, CEO and president of Argent Associates, a software development and smart technology integration firm in Edison, and Asociar, a global manufacturer of end-to-end supply chain optimization solutions in Plano, Texas, said she wants her ceiling to be the floor for the next generation of women.

“You just have to swim in the places where others aren’t,” she said.

After emigrating from Argentina to Elizabeth as a girl, Manetta studied international studies at Seton Hall University and marketing and accounting at Rutgers University.

“But, after working in human resources for Corporate America for 20 years, I saw that a male peer of mine was paid more despite my higher ratings,” she said. “My boss said, ‘He is married and has a baby — you’re single with no children — hence, management decided to give him more money.’

“That’s when I launched into entrepreneurialism, because I wanted to control my own destiny.”

With Manetta’s companies now worth more than $100 million, Manetta serves on the board of directors for numerous organizations and is the chairwoman of the Greater Dallas Hispanic Chamber of Commerce.

“Those are important positions that help to build an ecosystem,” she said.

Jessica Gonzalez, founder and CEO of InCharged, said that, when she found her niche manufacturing interactive wireless charging stations and photo booths eight years ago, she sold everything she had and moved back home to self-fund her Newark-based company.

Now that the business is growing via a successful merger, Gonzalez said she remains conscious of the fact that her and her team’s wellbeing must remain an important component to the company.

“As a mother to a 2-year-old, I’ve come to accept the fact that I’m never going to be 100% at home or at work — and that’s OK,” she said. “That is why I’m very big on mental health days for myself and my staff, because if you need that time, you should just take it.”

Providing flexibility in where, when and how her employees work always has contributed to a positive work culture, Gonzalez added.

“Even if they don’t have kids, maybe they want to go back to school or take an exercise class in the morning,” she said. “But as long as we get the tasks done that we need to, that’s okay.”

Melissa Walker, founder and president of Jazz House Kids in Montclair, said her life already was complicated when she was presented with the opportunity to become an entrepreneur.

“I was working in the law department at Prudential, I was moonlighting as a jazz singer and I was touring internationally, playing every club and bar I could,” she said. “But, then, WBGO radio asked me to create a jazz-focused program for kids and their parents — which led to an audience member seeing in me more than I saw in myself and inviting me to create an assembly program for Newark schools.”

Jazz House Kids has now grown to be one of the nation’s preeminent arts education and performance organizations.

“We incorporated and built a board; we started to put diverse programs together; we studied the trends and terrain of arts education; and we put a name on absolutely everything, because the more you can brand something, the more you and others can see it; and we gained supporters,” Walker said. “You have to always be looking ahead at the relationships and partnerships you need to meet where you are and move forward.”

Jeanne Pinder, founder and CEO of ClearHealthCosts.com, said she was inspired to create the digital startup focused on transparent health care pricing and education for consumers after working as a journalist and manager with the New York Times for nearly 25 years.

“I initially won $20,000 at a pitch contest with venture capitalists in New York City,” Pinder said. “And we do this work not only on our own site, but also in partnership with other news organizations.”

Pinder said her entrepreneurial wisdom has come with the experience of age.

“Divorce, single parenthood and menopause have all been really good for me, as I became intolerant of mansplaining,” she said. “And, though I no longer get hit on, I do get ignored. That gives me the latitude to maneuver, but it also takes me out of a number of conversations I should be a part of.”

The event concluded with an #IAmRemarkable workshop with Jen Shap, Google agency business lead, designed to empower women and underrepresented groups to self-promote their achievements in the workplace and in life more often.

Women Entrepreneurship Week has now scaled to 240 colleges and universities around the globe, with 21 New Jersey colleges currently participating. More information on the event can be found here.

But under Gov. Phil Murphy, an enhanced Angel Investor Tax Credit for investments made into technology-focused companies in the state will increase from 10% to 20% in January.

“Investing in the startup world is very high-risk, and the ability to enhance that for investors is a strong sell for both entrepreneurs and investors,” Coviello said. “Plus, women-led businesses statistically have stronger returns on investments.”

“The New Jersey chapter will be the seventh for the national platform with more than 800 investors who have contributed more than $150 million to women-led companies,” Coviello said. “Plus, women have created wealth and now that they feel they are in control of their own finances, they’re thinking about how to get in on this innovation economy.”

Education
ROI-NJ Staff -
September 23, 2021
A letter signed by 44 New Jersey higher education leaders was sent to the state’s congressional delegation this week, urging the doubling of the...