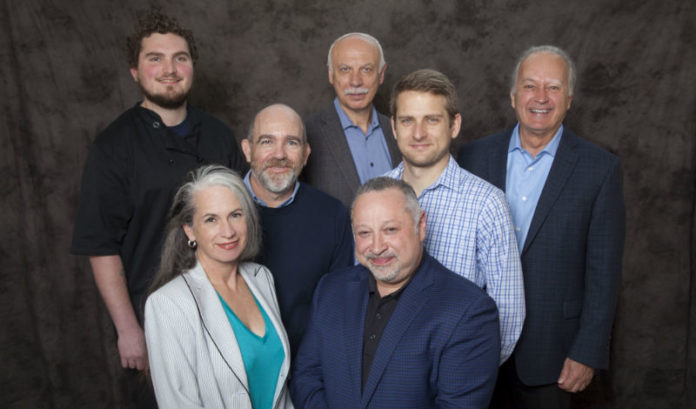 When we last talked with Mark Clifton, he was the CEO of Princeton Identity, a New Jersey tech company that developed iris recognition technology for Samsung’s phones.

(It’s a cool story —and right here if you want to take a glance.)

Like many high-tech CEOs, Clifton has moved on to his next challenge. He’s now principal and CEO of Front Row Labs — a venture equity firm that is committed to doing things a little differently as it helps cultivate the technology companies of the future.

Where will the company — founded in June — be permanently located? That’s the big question. And the reason for this column. The company has temporary space in Newtown, Pennsylvania — just over the border from New Jersey. But it’s temporary. The two investors who founded the company will eventually choose between New Jersey and Pennsylvania for a company Clifton says wants to serve the Princeton-to-Philadelphia high-tech corridor.

First, the company itself.

Clifton said the founders — Michael Korsky and Val Shtraks — entered the space after selling one of their own startups, Dreamliner, a technology-driven designer, manufacturer and marketer of premium shower products.

They started Front Row Labs, Clifton said, with the belief that they could improve on the traditional 10% success rate in the sector.

“It’s two investors who decided not to retire after a fairly large payout when they sold their company,” he said. “They decided that they wanted to get in the startup game and thought that they could do it in a better way — one where we are going to have experienced C-suite level executives on hand.

“I think the ability of founders to develop a close-knit relationship to the point where they could walk down the hall and get information and guidance quickly is an important feature.”

And why Clifton said it’s hard to put the firm in a traditional category.

“We call ourselves venture catalysts,” he said, “The idea is that we’re not just an incubator and we’re not just an accelerator. We really are a hybrid between the two. We’re going to provide entrepreneurship training, value creation training, accounting training, you name it.”

One-stop shopping you could say.

“If you’re a young graduate who has a really good idea, but has no business acumen, has no idea what you need to do for taxes, for payroll, for human resources, for insurance or legal — or anything else about starting a corporation, we can help,” Clifton said. “We’re going to offer those type of training courses and offer that C-suite level support from seasoned professionals that have been there and done that and understand what it takes to really get a company off the ground.”

Accounting services — not to mention marketing — are two areas Clifton said Front Row Labs will use as a differentiator.

Clifton said the cost will be based on the services used — but not overwhelming, regardless.

“We’re talking, I would say, less than 7% on the average company when it leaves.”

Where it will leave is the question New Jersey officials want to know.

Front Row Labs is the type of place that potentially will produce the type of companies Gov. Phil Murphy has longed for since the campaign — that is, the next generation of leading companies in an innovative economy.

Clifton said the state Economic Development Authority has been diligent in its pursuit. And offering more, he said, than Pennsylvania.

“New Jersey is talking about some great tax incentives for startups, including the ability to sell operating losses and get some rent abatement,” he said. “There are also some favorable things involving angel investors.

“We have not found quite as favorable arrangements in Pennsylvania. They are not nearly as formalized or have the coherent programs New Jersey has.”

“I’ve got three buildings I’m looking at in New Jersey, so we are definitely looking at all the different spaces around,” he said. “But no final decision has been made.  Our need, right now, is space that already has some level of build-out, because speed is important. We will have invested in several companies probably in the next two months.”

Clifton had nothing but good things to say about the EDA. His want is no different than any other CEO: The right space at the right price.

“There certainly is available space on the Princeton Route 1 corridor,” he said. “But it’s not cheap.”

Clifton knows that from his previous stop.

It remains to be seen if his latest venture — the type the governor wants more than any other — will be willing to pay the premium.