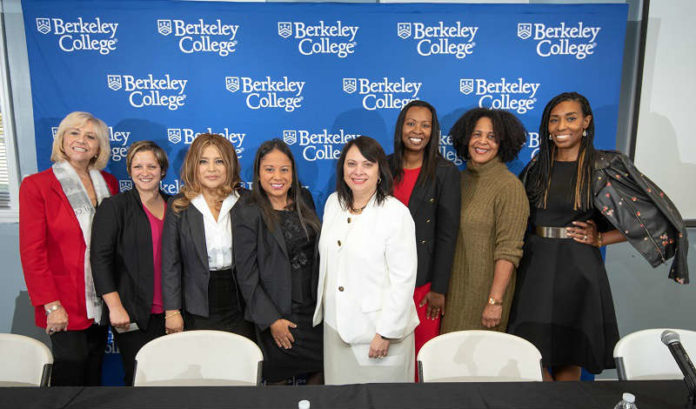 Angela Harrington said she was proud to look out into the audience during Berkeley College’s fifth Women Entrepreneurship Week event, held this year on Oct. 24 at its Woodland Park Campus.

“I see amazing women — women who have left their comfort zones and their native homelands to start new lives in the U.S., having to adapt to a new culture and language; female executives who, after hitting a broken rung while climbing the career ladder, started their own businesses; women empowering women through public service and socially responsible entrepreneurship; Berkeley College faculty educating the next generation of leaders and entrepreneurs; and students with boundless possibilities,” Harrington, vice president of communications and external relations at Berkeley College, said. “Working together, we must correct the inequities and injustices that reduce access to opportunities and upward mobility.”

Kevin Luing, the college’s chairman of the board of trustees, and Michael Smith, its president, reminded the more than 150 attendees that 68% of its more than 5,700 students are women.

“The stories and the challenges that our students have are going to match up very similarly with the incredible women panelists we have here today,” Smith said.

Panagiota “Penny” Babadelis is just one of them. A marketing communications student in the Class of 2021, Babadelis was diagnosed with a life-threatening illness at the age of 27 and given six months to live.

Instead, Babadelis said she decided to embrace life and find her silver lining in the chaos by using her decade of experience in the entertainment industry to start her own artist development company.

“I then realized I needed to take my ambitions and difficult journey one step further,” she said.

Babadelis continues to defy odds after obtaining her associate degree in marketing and communications and now currently earning her bachelor’s degree in business administration.

“The road is long, at times it is difficult, but we strive — and knowing when to ask for help is our strength,” she said.

Knowing and respecting one’s worth also was a common theme among the female panelists.

“For example, I didn’t know I was Latina until I came to this country,” said Susana Baumann, founder, CEO, president and editor-in-chief at Latinas in Business, a national nonprofit headquartered in Lakewood that advocates for the economic empowerment of Latina working women.

Baumann, who also founded LCSWorldwide, a multicultural marketing communications consultancy that worked closely with government agencies, nonprofits and corporations to increase their influence in Latin America, said she emigrated from Argentina at the age of 40 due to political turmoil.

“Not only am I suddenly lobbed in with this group of people who are all similar but different, but also I went back to school and became a student after being a tenured college professor in Argentina,” she said. “I had to build again a new identity while facing the new challenges of being an immigrant, a woman and a Latina.

“But, if I told you I survived 13 years of military dictatorship in Argentina, what has that given me as a person? Resilience. Understanding. Managing my fear. The ability to make quick decisions. I simply had to translate all of my challenges into attributes and strengths.”

Vonetta Hawkins, vice president of diverse segments in the Northeast for Wells Fargo Home Mortgage, said she, too, would not allow someone else’s opinions to dictate her life when she was told to apply for a lower-level position than she had intended.

“I was a young mom at 18, so failure was never an option — but I always made sure to position myself in a job that made me happy,” she said. “Every day, I live to say, ‘How can I be a better Vonetta?’ That’s it. I compete against no one — and I don’t let anyone else decide my value.”

Because the space for women at the top is unfortunately so limited in Corporate America, behind-the-scenes often can get cutthroat, said Shakira Johnson, founder of Johnson PR & Events, an award-winning public relations and events production agency in Westfield, and founder of the OMG Tea Party, a nonprofit designed to enhance positive support for girls and women.

“For one thing, you may see women doing a lot of the work at a company, but who actually owns the company? In many cases, the owners tend to be men,” she said. “So, let’s start by being kinder to one another and support each other in our future entrepreneurial endeavors, because when that happens, there will be more than enough room for us all.”

Kay Lucas, CEO and managing director of MediaSense, a Teaneck-based integrated marketing solutions company, said she herself faced discrimination as a black woman leader in advertising, despite the fact that she worked with multimillion-dollar brands such as Kraft Foods and Warner Bros. Movies.

“When I took maternity leave with my first child, I came back to find someone I had trained was promoted over me,” she said. “I spoke with management and got a promotion that day, but not only did I face challenges as a woman, but also as a black woman. During another promotion, there was a picket line in front of my office, and one time when I presented to a client, they said it was great, but that I should then bring the white people in.”

“But I just kept powering through and getting my promotions.”

Shea Richburg, the parenting expert, author and founder of Lion Mommy in Glen Ridge, said her consultancy coaches and assists not only parents and families in the changing workforce but also corporations.

“In this world, we have companies that do not value the people that help them make the money, whether it’s by providing maternity leave or flexibility for hardships or help in overcoming language barriers,” she said. “We have a shifting society and these big companies that have been around a long time will be disrupted unless they start to change.”

Richburg also founded the largest family-focused convention and expo in the region, bringing 4,000 attendees to Atlantic City last year, and is starting a new company to bridge the gap between colleges, C-suite executives and entrepreneurs to focus on the skills required for the future of work.

“I want to bring forth the information that I feel is not getting into the right hands,” she said.

Having emigrated from Peru at the age of 31, Castrillion worked in government in both Latin America and New York, and later worked in marketing for corporations such as Unilever and Marriott International.

Then, she gave birth to twins.

“It’s better to give quality time to your kids than quantity, because if a woman wants to open her own business or continue with her career, she must continue working,” Castrillion said. “It was hard, leaving my kids with someone I didn’t know, but we managed and now here we are.”

Motherhood also has changed the way Christine Cox-West works, she said, as a partner and director of insurance brokerage at the Fortis Agency, a Westwood-based financial services company.

“I got into this field at the age of 21 and got pregnant at the age of 23,” she said. “It’s hard when you’re 21 and giving financial advice to people, especially as a woman — but to be able to now have this perspective as a mother and relate to people who are decades older than me by explaining that this is what I am doing for my child, how I’m planning for their college, how I go about purchasing our life insurance, that has been a game changer.”

Empowering other women was important to every speaker, too.

Originally from Argentina, Aloe emigrated to the U.S. in 2002 to earn her MBA.

“But when I finished my MBA, the question I could see people had in their minds was, ‘Can she do the work? Can she communicate? Can she adjust to this new culture?’” she said. “It’s been a journey to build trust not only with others, but also in myself.”

Aloe then worked in Corporate America with companies such as PwC, Procter & Gamble, Reckitt Benckiser and Promotion in Motion for more than 20 years, but decided to open her own consultancy after giving birth to her first child.

“I am now giving back to my community by helping others find their paths and their passions,” she said.

Jill Johnson, co-founder and CEO of the Institute for Entrepreneurial Leadership in Newark, said it also is OK not to know what it is you want to do.

After graduating from Harvard University with a degree in economics, Johnson joined the financial analyst program at Goldman Sachs, gave birth to four children and then co-founded a nonprofit with her father to especially help minorities and women start their own businesses.

“What is important is to create options for yourself by getting the best education you can, making connections and developing relationships,” she said.

Kate Muldoon, regional director of the Small Business Development Center at William Paterson University, said she loved her initial career as a kindergarten teacher, but, after becoming a single parent, she decided to enter the world of banking for the next 22 years, where she learned to work with women and minority business owners.

“In addition to not having a plan, women often would say, ‘I think I need a loan — how much do you think I could get?’ whereas men would come in and say, ‘I need $125,000 and this is how I’m going to spend it,’” Muldoon said. “We still often have to work with women to get them to understand that what they are trying to do is of value.”

Karen Pena said that, as a single mother of four, a grandmother and a survivor of domestic violence, she completely understands the existence of a confidence gap.

“It was very hard to go through all that,” she said.

Today, Pena is CEO of Pena Tax Services, a property manager and accountant with TOP Real Estate Investments Inc., her Peruvian family’s business in Paterson, and founder of Our Way to HOPE, a Paterson-focused nonprofit for underprivileged families.

She also earned her bachelor’s degree in accounting at Berkeley College and was the first in her family to graduate from college.

“I wanted to be able to help others like me,” she said.

Melissa Baralt, a master faculty member in math and sciences at Berkeley College, said that also is why she founded and became president of SheCaucus in Paterson, which focuses on helping developing women leaders in their communities.

“When I ran for office last year, I noticed there were other women like me who had no one else to turn to, so I started a nonprofit for women to develop leadership skills and self-confidence,” she said. “My goal is to help other women and students with community service, education and awareness — because, if we don’t change the narrative, we won’t change the story.”

VOICE Summit has elevated NJIT’s brand around the globe