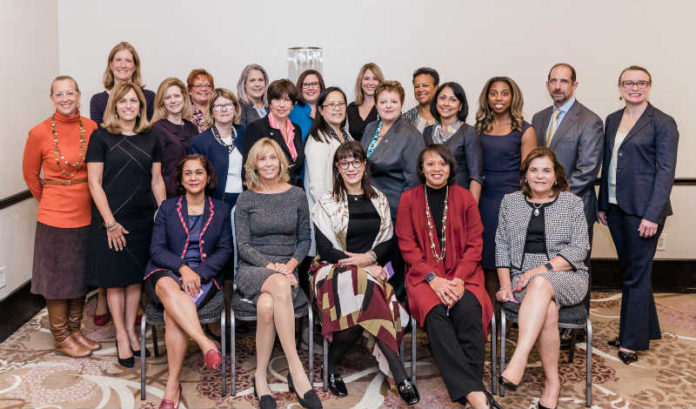 Executive Women of New Jersey released “A Seat at the Table,” its fourth biannual report in collaboration with PwC on advancing gender diversity in New Jersey’s corporate boards, at its Corporate Gender Diversity Awards breakfast Tuesday at the APA Hotel Woodbridge.

“The conclusions of all of our reports have demonstrated that companies with more gender diversity, and diversity in general, in top leadership outperform their competitors by every measure,” said Barbara E. Kauffman, executive vice president and chief operating officer of Newark Regional Business Partnership and president of EWNJ, a senior-level executive women’s organization committed to increasing the number of women in leadership and on corporate boards in New Jersey companies.

“There is no greater testament to the impact of women’s leadership than the success of the companies we are honoring today.”

The 30 New Jersey companies honored achieved significant board gender diversity this year by having three or more women on their boards.

That number increased from 22 companies in 2017 — and that was not the only piece of good news, said Anna Maria Tejada, president-elect of EWNJ and co-chair of “A Seat at the Table,” partner at Kaufman Dolowich & Voluck LLP and past president of the New Jersey Hispanic Bar.

Tejada thanked Catie Hall, director of the governance insights center at PwC, for her dedication to this year’s report.

“The progress is at times incremental, but if you step back and look at the trend line, it’s slowly going up compared to where we were five, 10 years ago,” Hall said. “Tremendous progress has been made.”

In reviewing the representation of women on the boards of the 100 publicly held New Jersey companies in the Russell 3000, the number of board seats filled by women increased from 152 in 2017 to 175, or 18.1%, this year.

Additionally, for many years, American Water in Camden was the only company in the report whose board included 50% women. This year, they have been joined by Innophos Holdings in Cranbury and Tabula Rasa Healthcare in Moorestown.

“We clearly have a lot of work to do, but this news shows that our efforts and your support of these efforts are working,” Kauffman said. “Importantly, it also shows that more and more companies are recognizing the tremendous value of women’s leadership and are taking active steps to ensure women have equal access.”

Including investment decisions, Hall said, which are more so being made depending on whether or not companies have shown progress in certain areas, including board diversity.

“That is a trend we continue to see gaining traction,” she said. “It’s the right thing to do, but there also is a very real business case for how diversity can add to your bottom line.”

While the report showed signs of progress, the 18.1% women directors in New Jersey’s top companies lags behind the national average, with women holding 19.3% of all board seats in Russell 3000 companies.

Furthermore, 16 of these New Jersey companies still have no women on their boards at all.

Briana Vannozzi, an anchor and correspondent for NJTV News who delivered the opening remarks at the event, said she is concerned by this, including within her own profession.

“Still, now, in 2019, in news media there are more white males working in a newsroom than there are in the rest of our workforce,” she said. “This is something we need to focus on, because we are the people who shape what and how you see the issues in the world.”

The report also highlighted the fact that just 19.7% of executive officers in New Jersey’s top companies are women; just 12.7% are high earners; and just 5% are CEOs.

Furthermore, while companies may be beginning to understand the business imperative for gender diversity on their boards, progress on racial and ethnic diversity remains slow. For example, of 5,670 board seats in Fortune 500 companies in 2018, minority women held just 207, or 4.6%, and this year, while there are 33 women CEOs at Fortune 500 companies, just one is a woman of color.

“If women are not sponsored and groomed for leadership relative to their male counterparts, they will not succeed, and, according to a PayScale study, women of color are the least likely to have a workplace sponsor,” said Faith Taylor, business and marketing professor at Montclair State University and co-chair of “A Seat at the Table.” “The report talks about some of the solutions for this and gives us a guideline, a beacon of hope and a framework to follow.”

A bill introduced in November 2018 by Assemblywomen Nancy J. Pinkin (D-Edison), Yvonne Lopez (D-Perth Amboy) and Angela V. McKnight (D-Jersey City) would make New Jersey the second state in the nation to mandate board diversity for publicly held corporations with executive offices in the state by December 2021, following California. To comply with this law, New Jersey companies would have to add 136 women to their boards over the next two years.

EWNJ therefore recommends that current CEOs, board members and nominating committees look beyond sitting or retired CEOs and those who have already served as board members when identifying board candidates.

“We needed to strengthen our skillsets in finance and marketing, so each time we had an opening, we searched for directors with those backgrounds,” she said. “We also employed recruiters because we had tried informal networking and it wasn’t producing quickly enough the pipeline that we needed. The recruiters then gave us lists of the same white male CEOs that we had gotten before.”

EWNJ also suggests that companies make sure at least one woman is under consideration on every slate and that board directors work to identify and sponsor senior and mid-level women in their companies who have potential.

Finally, EWNJ recommends that women aspiring to be on boards not only research companies that share their values to ensure a correct fit, but also prepare and widely share a clear and compelling narrative about their skillsets by identifying the strengths they would bring to a board and why they are interested.

Experience on boards of nonprofits also can provide insight into the inner workings of boards, said Pamela J. Craig, a current board member at Merck & Co. and Progressive Insurance, a former board member at Akamai Technologies and Walmart, and the former chief financial officer of Accenture.

“I believe not-for-profit service is critical, because you learn what it is like to be on a board and if you even like it or not,” she said. “Sometimes, it can be frustrating when you can’t take control and make something happen, but rather must simply advise and influence. So, try to pick a not-for-profit that not only is a passion of yours, but also one in which you can network and meet others in the corporate world.”

EWNJ is also the largest provider of scholarships to nontraditional graduate students in New Jersey, having awarded more than $1.3 million to women in its Graduate Merit Award Program, which is focused on establishing a pipeline of future women leaders.

Visit ewnj.org for more information and to view the report in its entirety.

Q&A: We talked with Tara Dowdell about race and business on...