Blue chip retailers are fueling the industrial market in New Jersey, but there’s a a lack of quality space available and new developments are filling up fast, according to Transwestern Commercial Services’ Third Quarter 2019 Industrial Market Report. 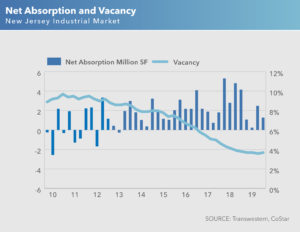 In Central Jersey, occupancy increases were led by the Exit 11/Perth Amboy/GSP, Exit 8A, Route 287 West and Somerset markets. In North Jersey, velocity was up west of the Turnpike in the Bergen Central and Morris East submarkets.

In Q3, average asking rents increased to $8.59 per-square-foot — the largest quarterly increase since Q4 2018. Year-over-year, rents grew by 6.8% with the greatest increases seen in the Hudson Waterfront, Route 280/Suburban Essex and Route 46/23/3 submarkets. Nearly one-third of submarkets averaged rents higher than $9 per-square-foot. Overall market rents were up by nearly 30% over the past three years, with 16 of the state’s 21 submarkets seeing an increase of at least 10%.

“We are continuing to see remarkable interest for high-quality industrial space, and skyrocketing rents in several of the state’s key submarkets are a result of the insatiable demand in the market,” Jeffrey Furey, managing director at Transwestern, said. “We expect that future absorption numbers will remain strong, especially in Central New Jersey, when tenants that preleased space take occupancy in newly developed properties.”

The report found large tenants favor new development over older spaces that have come back online.

The top three leases in the quarter totaled more than 3 million square feet. They included:

The leases, Transwestern said, may be an encouraging sign for the upcoming holiday season.

“Developers are continuing to scour the state for new sites, with less than 5 million square feet under construction – the lowest we’ve seen in more than three years,” Matthew Dolly, director of research for Transwestern’s New Jersey office, said. “We should expect to see a strong holiday shopping season ahead, and as e-commerce takes an even bigger chunk out of total retail sales, this will only continue to fuel further growth in the warehouse sector for the next several quarters.”