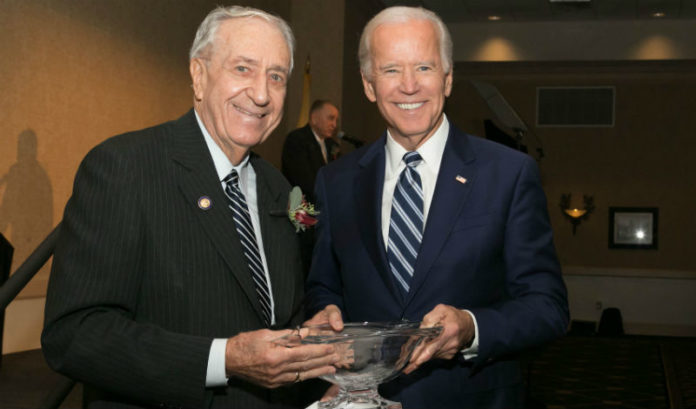 Former U.S. Rep. William J. Hughes, for whom the William J. Hughes Center for Public Policy at Stockton University is named, has died. Hughes, who also served as U.S. Ambassador to Panama, turned 87 earlier this month.

Hughes served in Congress for 20 years, from 1975 to 1995, representing the 2nd Congressional District in South Jersey, and then served as ambassador to Panama under President Bill Clinton from 1995 to 1998.

“Congressman Bill Hughes represented his South Jersey district for 20 years, but he was nothing less than a New Jersey icon,” Gov. Phil Murphy said in a prepared statement. “He was a public school product and a Rutgers graduate two times over. As a prosecutor in Cape May, he fought to keep residents safe. As a respected congressman, he fought to protect the Jersey Shore from polluters and the Pinelands from development. As U.S. Ambassador to Panama under President Clinton, he served our nation on the world stage.

“Tammy and I are saddened to learn of his passing, and send our condolences to his children and their families, and to all who knew him and called him a friend.”

In a statement to the college community, Stockton President Harvey Kesselman said:

“Bill Hughes was the epitome of what a public servant ought to be. He exuded a sense of civility with respect to everything he did in life, and he was unwaveringly committed to exhibiting that noble conduct to those with whom he came in contact. We are extremely grateful for his having chosen Stockton to house his memorabilia, and we are a far, far better place as a result of his center being an integral part of what we hold dear as a university. He will be sorely missed.”

Stockton’s Hughes Center was dedicated in 2008 and serves as a think tank and advocacy organization on issues affecting South Jersey and beyond.

“The passing of Ambassador Bill Hughes is a sad loss for me personally and for our democratic society at large,” interim Executive Director John Froonjian said in a statement. “South Jersey, and, indeed, the nation, has lost a great statesman. His story is forever tied to the recent history of the region. As our 2nd District representative, Congressman Hughes was a leader on the environment, ocean quality, Pinelands preservation and keeping what is now the William J. Hughes Technical Center from moving to Oklahoma. He was a national leader on legislation concerning guns, crime, aging issues, and trademark and copyright law.

“But the most powerful lesson in today’s era of political tribalism and partisan warfare may be that politicians could be civil and bipartisan and still be effective. He treated everyone, regardless of party, with courtesy and respect, and his gentlemanly approach helped improve many lives.”

As Murphy noted: “Congressman Hughes will continue to inspire future leaders through the work of the William J. Hughes Center for Public Policy at Stockton University, perhaps the most fitting tribute to his tremendous legacy.”

Hughes was inducted into the Rutgers University Hall of Distinguished Alumni in 1997.

The university also issued a statement: “Bill Hughes was a distinguished Rutgers alumnus whose kindness, good humor and love of Rutgers were always evident. His standout national and international public service — including as a Democratic congressman who served New Jersey for decades with wide bipartisan support and as U.S. Ambassador to Panama — are an unending source of pride for Rutgers. A member of the Rutgers University Hall of Distinguished Alumni, his legacy will live on at Rutgers, where his papers reside at the University Libraries, also home to the William J. Hughes Room in the Alexander Library, and in the form of an endowed scholarship.”

Hughes was preceded in death by his wife, Nancy. He is survived by their four children and their families.

“The Hughes Center for Public Policy mourns the passing of our namesake, our mentor and our friend,” Froonjian said. “We rededicate our efforts to promote civic engagement and civility in our public conversations to the memory of Ambassador Hughes.”