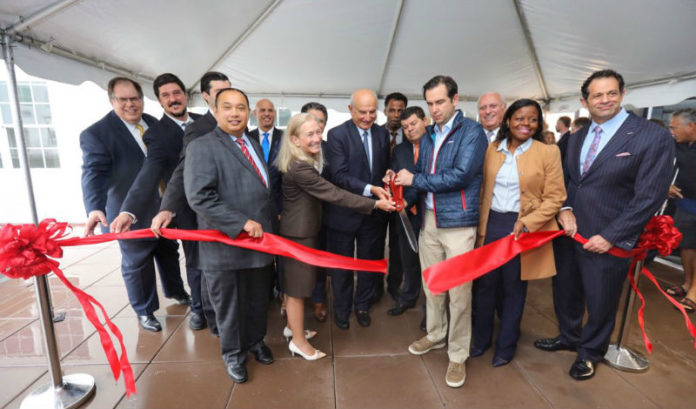 A ribbon cutting was held on Thursday to celebrate the opening of City Line West, a luxury apartment complex part of the $400 million University Place redevelopment area.

The ceremony was hosted by Circle Squared Alternative Investments, The PRC Group of Companies and Del-Sano Contracting Corp.

The 132,000-square-foot building located at 33 University Place Blvd. has a total of 144 studio, one- and two-bedroom floorplans stocked with some of the top amenities and technology, the trio said.

After the ribbon cutting, representatives from Circle Squared and PRC celebrated the groundbreaking of the next phase of the multifamily project — City Line East. The site, which is larger than City Line West, will have 198 luxury units with smart home technology as well as 8,564 square feet of retail space.

“It didn’t seem that long ago that our team was just starting to discuss University Place and reviewing preliminary ideas and sketches on paper,” Jeff Sica, CEO and president of Circle Squared, said. “Now, fast forward to this morning, and we’re coming together again to celebrate another momentous achievement in the master plan for this location. The joint venture we’ve formed with PRC has yielded incredible results here and we could not be more thankful to have a partner such as them to bring City Line to life. We’re looking forward to the next chapter in the City Line project with the groundbreaking of City Line East and hope to be standing here again next year at this time, alongside PRC, to celebrate its grand opening and begin to welcome residents to their new homes.”

“We are celebrating the grand opening of City Line because of something very powerful — an idea,” said Robert Kaye, Chairman and CEO of The PRC Group of Companies. “But an idea is a lone thought without motivation, action and teamwork. We brought together the best in each discipline to ensure success. City Line is here today because of our partners and the hard work of many people. We look forward to our next phase with all of our partners and friends.”