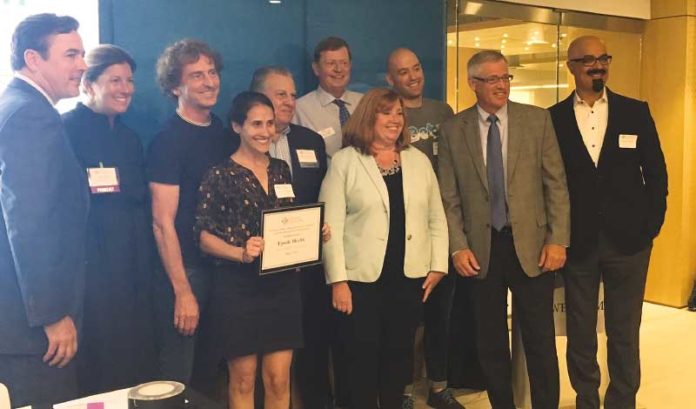 In early August, three startup founders pitched to a panel of judges at the inaugural Princeton Pitchstop competition, created by the Princeton Mercer Regional Chamber and supported by Domain Computer Services (based in Cranbury), Fox Rothschild (which has a major New Jersey presence), Withum (based in Princeton) and other companies.

The organizers wanted to hold events like this one to provide opportunities for New Jersey startups to get in front of investors, and to incentivize them to stay in New Jersey.

Judging the pitches were Mario Casabona, founder and CEO of Casabona Ventures (based in Kinnelon); Kathleen Coviello, vice president of technology and life sciences investments at the New Jersey Economic Development Authority; Kelly Ford Buckley, an investment partner specializing in enterprise solutions at Edison Partners (based in Princeton); and Sean O’Sullivan, managing general partner at SOSV (also in Princeton).

The winner for the evening was Rachel Trobman, co-founder and CEO of Upside Health, located in West Orange and New York. Upside Health is a digital health company that is reimagining chronic pain care and, in doing so, helping to reduce the costs of chronic pain treatments for health systems and insurance companies. The company offers Ouchie, a reimbursable mobile app for pain management.

During her pitch, Trobman told the audience that an astonishing one-third of the U.S. population suffers from chronic pain, which is defined as a painful condition lasting more than six months. Some 25 million Americans experience chronic pain on any given day, but there is a shortage of pain specialists to help them.

She also noted that chronic pain is on everyone’s minds these days, given that tens of thousands of people have died from opioid overdoses. Chronic pain is difficult to treat, she added, and it’s complicated, varying from patient to patient. Chronic pain patients go to the doctor an average of 18 times a year and use two to three times the resources of other patients.

Patients who use the app can track both their pain and its location, and create a treatment goal. “If their pain were 50% less, what would they do differently? From there they are connected to others,” because chronic pain is isolating. They are also directed to wellness information, such as sleep stories. Pain is tracked to help patients see micro accomplishments when recovery is slow.

In response to a judge’s question, Trobman noted that one of the company’s biggest challenges has been the long sales cycles in the industry.

Paul Kandle, president of BOAST Groupware, based in Princeton, said the first part of the company name stands for “business operations activity simplification toolkit.” He said BOAST was started after the  founders had surveyed companies about their business software.

The majority of the small and medium-sized businesses interviewed said that they hadn’t used similar platforms they possessed or didn’t like using them. Kandle noted that BOAST is easier to use than other platforms: “Our vision really is to make work easier for everyone.”

Kandle said BOAST is solving the problem of small business software that is expensive and cumbersome. “Our (Software-as-a-Service) software consolidates all of the operations in one place, is simple to use and cuts software expenses by using a bundled approach.”

He called the app the “Swiss Army knife” of small business software because it provides companies with an alternative to purchasing specialized individual tools. With one sign-on, users can access various software packages or applications. “There are 16 modules, everything from expenses to training to (customer relationship management),” he said.

One of the key applications allows users to see anywhere in an organization where a customer has been “touched” by someone using the software, he noted.

Answering a judge’s question about traction, Kandle said BOAST is an early-stage startup, had just launched the product in January and was currently giving away free trial versions of the app. Contacted after the event, Kandle noted that the company is now offering extended free trial versions to small sales teams via SBA.gov, and has attracted some interest there. The company is also marketing through chambers of commerce.

Matthew Cristaldi, co-founder and CEO of Hoboken-based Ribbit, pitched his company’s interactive crowdsourced app, which informs users about restaurants that are eco-friendly and sustainable.

He noted that, in order to be recommended, restaurants must answer a series of questions — for instance, if they use locally sourced ingredients or reusable utensils. Each restaurant gets a letter grade and color-coded icon determined by an algorithm.

“The whole point of this application is that we want to provide specific information and reduce the amount of energy a consumer uses to make a decision,” Cristaldi said.

While there are lots of other apps that helps people find restaurants, the major players don’t take niche information into account, so the Yelps of this world don’t really help people who are looking for green restaurants, Cristaldi noted.

“We launched our Android app just last night,” Cristaldi said, referring to a night at the end of July. “Prior to that, we raised $30,000, which allowed us to hire our initial team and begin development of Android and iOS apps.”

In response to a judge’s question, Cristaldi said that the startup “had just partnered with one of Europe’s biggest suppliers of eco-friendly goods and services. …They’ve agreed to be a supplier for our platform.”