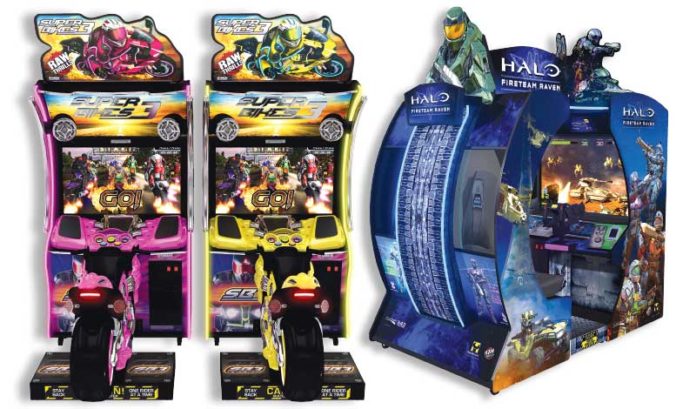 Just like anything else, that Donkey Kong arcade cabinet tucked in the corner of the neighborhood pizza hangout had to come from somewhere.

And New Jersey’s Betson Enterprises is really the only game in town when it comes to the supply chain side of those machines.

They might cost only quarters to play, but make no mistake: The business of arcades has been paying dividends for the Carlstadt company.

The 300-employee firm, after about seven years of uninterrupted revenue growth, is reaching new levels with trends such as bar arcades, increasingly popular bars that mix drinks and pinball. The best part for any logistics company today? Right now, Amazon isn’t a competitor.

Betson Enterprises doesn’t just play in the area of arcades, either. It’s the primary business division of H. Betti Industries, which was founded in 1934, when a Greenwich Village restaurateur got into the business of jukeboxes — and Betson still does jukeboxes, but it also does vending machines, office coffee devices, billiard products and, of course, arcade equipment.

Especially when it comes to arcade equipment, there are only a handful of family-run enterprises handling the logistics behind Pac-Man and other arcade favorites, according to Jonathan Betti, vice president of sales and marketing at Betson.

“I believe there are only about five competitors in the same business,” he said. “I don’t think any of them have the scale and scope. We’re the only one that’s nationwide. And we also do worldwide sales.”

The company involves itself in basically everything but the manufacturing of the expensive arcade machines that are purchased by pizza joints and other small businesses, as well as well-known brands such as Chuck E. Cheese and Dave & Buster’s.

Businesses in this niche market were short of optimism about it in the early ’90s, at a time when many thought it was game over for arcades.

“That was when console gaming was coming out and many dedicated arcades were impacted by that,” Betti said. “For the most part, outside of maybe seeing something on the Jersey Shore — a seasonal business — you just don’t see that business model anymore.”

But the setback was only temporary, Betti added.

Arcade machines have become central to bowling alleys, waterparks, trampoline parks and other entertainment centers as they try to transform into multiattraction destinations. Gaming rigs are also increasing moving into unlikely settings as taverns try to be more millennial-minded.

“There has been a bounce-back in terms of people wanting to do things at home,” Betti said. “These are experiences you can’t replicate sitting on the couch. There’s a generation of kids that are used to interacting with everyone on games online, but they’re realizing also that it’s a lot of fun to do that with the person sitting next to you.”

Even if its longtime cottage industry is rebounding, the business has been adding new technologies such as virtual reality equipment to its service mix within the past year to stay ahead of gaming trends.

All the while, Betson has been relatively insulated from some of the same Amazon-fueled disruption that many other businesses in the e-commerce sector have experienced.

“Getting an (arcade cabinet) is not as easy as buying a box and shipping a box,” Betti said. “Besides the fact that these are expensive machines, this is not a product you can just leave on someone’s curb, because it requires many hours of installation. So, the Amazon effect has been minimal, if there has been any at all.”

But when it comes to remaining a global leader in arcade game sales and logistics, this business isn’t playing around.

“A lot of things seem outside Amazon’s scope or radar, but they’ve shown a tremendous appetite to be involved in everything, so you can never say never,” Betti said. “We have to be aware of all potential competition.”

United aims to train thousands of women, people of color to be pilots