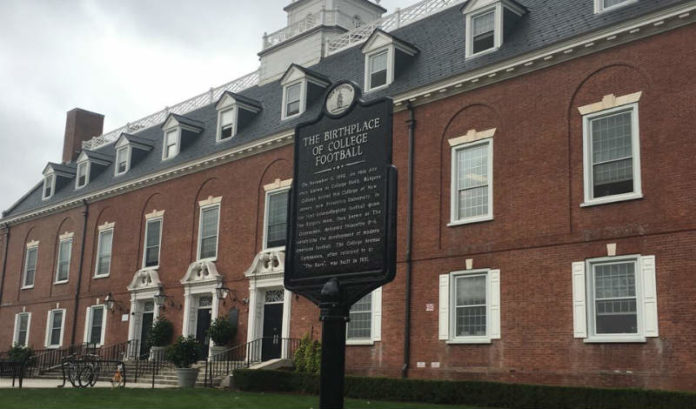 Chris Paladino couldn’t believe it when he read the story in USA Today about how little Rutgers University had commemorated being the host of what is considered to be the first college football game.

“They showed the picture of the broken parking sign on what was the spot of the game,” he said.

“We have been implementing over the last couple of years, in partnership with the city, a historic sign program,” he said. “We’ve probably have put up 15 signs already. From the Carnegie Library to the place where the Declaration of Independence was read to the old churches, to city hall, to the spot where Alexander Hamilton was feuding with the British regiment to Robert Wood Johnson’s boyhood home, those kind of things.”

Then he got the news: The staff at Devco had ordered a sign.

He quickly called Rutgers Athletics Director Pat Hobbs to tell him the news.

That sign, which was put into the ground Tuesday morning, will be officially unveiled Wednesday — the 150th anniversary of that first game (Rutgers beat Princeton, by the way). It’s in front of The Barn, or what is formally called the College Avenue Gymnasium.

The unveiling will be part of an all-day commemoration of the game. In addition to the sign unveiling, participants will ring the bell at Old Queens. The bell, given to the school by Col. Henry Rutgers in 1826, is reserved to mark significant occasions.

The day will end with an event at the New Brunswick Performing Arts Center, where there will be panel discussions and videos about college football and Rutgers.

Many former players are expected to attend the festivities. It’s unclear if former Rutgers head coach Greg Schiano will be there. Schiano continues to be the rumored favorite candidate to return as head coach of the football team.