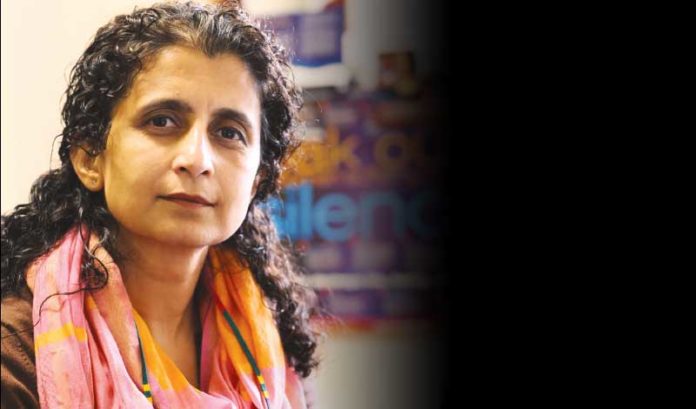 It was only last year that a few committed business leaders and academics came together to form New Jersey’s first organization dedicated to elevating the voices of Asian Americans across the Garden State.

The group, Jersey Promise, is making up for lost time.

The organization immediately published a comprehensive survey entitled, “A Report on the State of Asian Americans in New Jersey.” It overviews just about anything you’ve wanted to know about the state’s fastest growing demographic: Asian Americans.

She spoke with ROI-NJ about the goal of this new group and what they’re learning about Asian businesses in New Jersey.

ROI-NJ: What was the impetus behind the founding of this organization?

Maneesha Kelkar: If you look at New York or California, there’s several Asian American policy organizations — each covering different aspects of Asian American life and business. The founders of this organization wanted to fix the gap that existed for anything like that in New Jersey. They felt that Asian American voices and interests are often mixed up in the overall New Jersey landscape. There are so many issues specific to the Asian American community that need to be addressed. But, also, they had a larger goal of facilitating working together with all immigrant groups. We weren’t just trying to do this for Asian Americans. We want to partner with other immigrant groups facing similar issues and get laws enacted, administrative decisions made or other issues addressed that might be in business, or it might be in immigration policy or family and social services. So, we want to work with other groups, as well.

ROI: Could you talk about the state’s composition of Asian-owned businesses? What do those business owners care about most?

MK: New Jersey is really a diverse state. And immigrant business owners are almost half of the state’s Main Street businesses. That’s a large number. Half of those immigrant business owners are Asian American. And small business is a huge component of New Jersey’s economy. But there doesn’t seem to be as much of a support system for these businesses. For example, minimum wage legislation passed — and that’s fantastic, because a significant percentage of minimum wage earners are Asian American, so we want to support their welfare. But there’s always this classic conundrum between minimum wage and really small business owners, because they’re hit hardest. I think policy should keep all these things in mind, and maybe when the minimum wage goes up, we can look at how we can better help small businesses with something like the tax credit system. It should be a win-win.

ROI: Your report detailed how large a majority of Asian Americans in the state are immigrants — two-thirds. And, also according to the report, more immigrants have come from Asia than Latin America and other Spanish speaking nations every year since 2011. What challenges does this population face when members go to start their own business?

MK: There’s a whole range of roadblocks, and many of them may not come as a surprise. It’s what you would expect from a relatively new immigrant population. Gaps in knowledge, cultural competency, language factors — especially in some Asian American communities — all make it difficult for business owners to secure loans, on top of the difficulties that already exist in accessing capital. We’re looking to community banks to help make that process smoother. We haven’t done studies in that area yet, but through our first report we’ve identified it as an issue.

ROI: Now that you’ve finished that report, what will the organization’s priorities be going forward?

MK: Every section of this report has thrown open issues that need addressing. But we’re really following up on the need for cultural competency training that starts in the public school system. That’s for teachers and administrative staff. It’s something we’re taking the lead on. We’re taking a look at business issues, including the conundrum of one type of business — nail salons. The workers in these salons don’t as of yet have protections. They often work with harmful chemicals that they inhale. It’s a challenge to their health. You drive into any New Jersey town and there will be five of these businesses — there’s a large number, and a large population of workers. These are typically immigrant workers, primarily Vietnamese, Korean and Nepali. The conundrum is that the businesses are also immigrant- or Asian-run. But we’re looking at how legislation could improve the welfare of nail salon workers, but also help those business owners run their business and succeed, replicating what has been introduced in other states, such as New York.

Across New Jersey, there are 941,057 Asian American residents (roughly 10% of the state’s population), living mostly in Middlesex, Hudson and Bergen counties. Here’s the largest population groups, according to Jersey Promise’s survey: