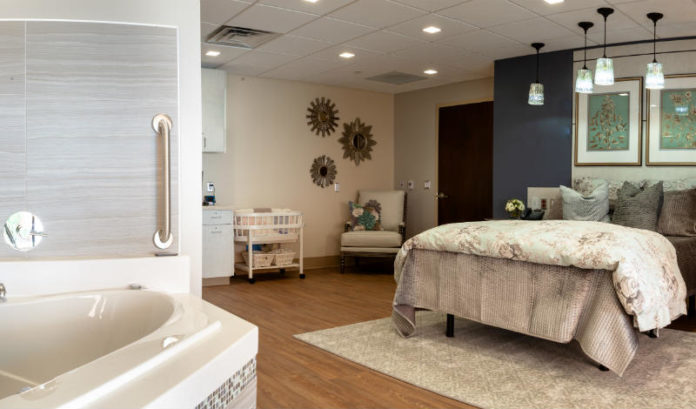 The opening of the ultra-modern Mary V. O’Shea Birth Center at Saint Peter’s University Hospital earlier this month served two purposes: It gave Saint Peter’s, long the leader in delivery in the state, another reason to be viewed as such, and it opened another area of maternity care for the hospital.

The center will provide midwife and doula services for natural births for women with low-risk pregnancies. And it will do it at the New Brunswick hospital in a suite-like setting that was created with the comfort of the mother — and her loved ones — in mind, complete with not only a queen-size bed, a whirlpool and a serenity garden, but also a kitchen and family room area.

Pamela Harmon, the director of women and children’s services at Saint Peter’s and administrative director of the birth center, said every one was designed with intention.

“We’ve made it so an expectant mother has enough room to move freely and be with her family during the process,” she said. “We wanted to create a homelike environment, where a mother can have her family with her in a place that doesn’t look like a hospital.”

The business model for the center is easy to see.

There are only approximately a dozen of these centers nationwide that are located at hospitals — with this being the first hospital-based center in the state in the metropolitan area. (Multiple freestanding birth centers have opened in the state in recent years.)

Harmon said the center expects to draw people from as far as 50-60 miles away, if not more.

The center opened with two birthing suites, but already is making plans for an overflow area as well as a possible addition of one or two more suites.

Last year, Saint Peter’s midwifery program had 63 natural deliveries at its hospital. It’s a number Harmon feels the hospital will easily double in 2020.

“We weren’t capturing those women that wanted to have this type of an experience,” she said. “It’s our low-risk women that really want to have a natural physiological birth. We already have pregnant women doing their prenatal care with us in expectation of using this facility.”

Saint Peter’s CEO and President Les Hirsch said the facility not only adds to Saint Peter’s reputation for labor and delivery care, but the fact it is connected to the hospital provides assurances other birth centers cannot.

“If something unexpected happens, we don’t even have to get an ambulance,” he said. “You’re on a stretcher and you’re in an elevator and then you are in the hands of some of the most expert people in the country in less than a minute.”

“Our maternity and children’s services are recognized nationally,” he said. “We have well over 5,000 deliveries a year. You could say this new center is cool or you could say it’s really very thoughtful and visionary, as we now can provide the most critical services — from high-risk neonates, children needing intensive care and women needing high-risk services to the most holistic, where somebody wants to have a baby in a homelike environment in a separate facility from labor and delivery by nurse midwives.

“Now, we have that facility and it’s the only one in the state of New Jersey and a one of a handful of facilities like it in the country.”

Harmon is confident the new center can handle any issue that comes up — providing all the necessary assistance along the way.

“We have the support to be able to work with a woman in active labor,” she said. “She’ll have a midwife here present, an RN and a mother/baby-trained technician, who has been formally trained as a doula, or someone who helps a mother through labor. Helping her with using different tools, whether it’s the birthing ball, the peanut ball, the birthing stool and the walking or being in the tub or the shower.

“We’re able to focus one on one. A lot of times, with the significant other, there’s only so much that you can do. They get overwhelmed. You go to those classes and you can help them breathe. But when you’re in the middle of it, you’re limited. We’re able to help.”

Harmon said it is a part of Saint Peter’s mission and reputation.

“This center will be another way that Saint Peter’s sets itself apart,” she said. “We’re leaders.”

BioCentriq to be acquired by South Korea’s GC Corp.