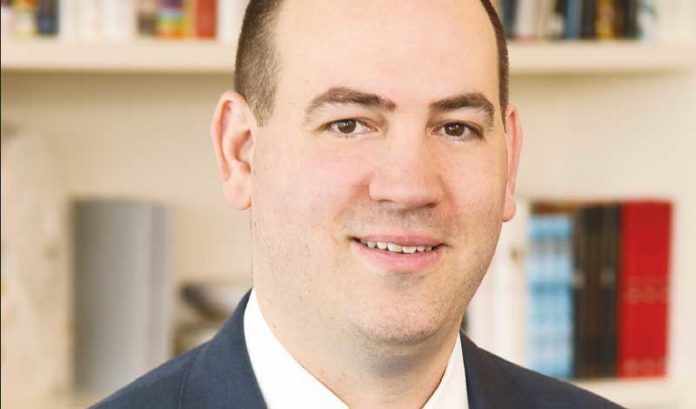 Matthew Vamvakis, 40, credits his eclectic work history — including a life-changing experience with the American Legion Jersey Boys State — with helping him work his way up from a summer intern during the financial crisis to market leader for J.P. Morgan Private Bank’s growing presence in Princeton and South Jersey.

Now, he said, he is looking for others just like him.

“Princeton and South Jersey play such an important part in our expansion, and I am looking to hire the right talent over the next year to help meet our clients where they are in this part of the state,” Vamvakis, executive director at J.P. Morgan Private Bank, said.

Growing up in Newfield, Vamvakis said he always was “Mr. Student Government.”

“As president of the New Jersey Association of Student Councils, I certainly had a passion for making connections and growing relationships,” he said.

Vamvakis went on to earn his bachelor’s degree in political science, philosophy and economics from the University of Pennsylvania in 2001.

It was during his studies that he took advantage of the university’s semester in Washington, D.C., in which nearly two dozen students were encouraged to work four days a week at an internship.

Vamvakis said he knew how to find work at the top.

“When (Bill) Clinton ran for president in 1992, the media kept showing this photo of him in high school shaking hands with (President John F.) Kennedy in the Rose Garden,” Vamvakis said. “That’s because he was part of the American Legion’s Boys Nation program.”

The program, in which Clinton served as a senator from Arkansas, is designed as a mock Congress, organized and administered for citizenship training purposes since 1946.

Vamvakis served as the senator from New Jersey in 1996 and was invited to staff the program for several years afterward.

“I spent some time with President Clinton and a bunch of senators, so, when I was accepted to UPenn’s Washington Semester program, I called and said I would love to intern at the White House,” he said.

Vamvakis became the acting special assistant to the deputy director of intergovernmental affairs, spending more than half of his year at the White House in 1999.

“It was amazing experience to have as a college sophomore,” he said.

However, seeing as his internship took place during the Monica Lewinsky scandal, Vamvakis said he returned to the private sector to perhaps one day return to government in an elected seat.

“I was then recruited as one of 10 people into the inaugural year of a rotational leadership development program at Wells Fargo, working out of Indianapolis and San Francisco, to then graduate into a junior-level management role as a program manager,” he said.

His operational work with Wells Fargo caught the attention of McMaster-Carr Supply Co., where he was hired as a supervisor for rack operations back home in New Jersey.

When he tried to return to financial services a couple years later, his first attempt to join Signature Bank ended up in an iced job offer after its pursuit of an initial public offering.

“I had to sell cars for several months as I sent out resumes,” Vamvakis said.

His determination, however, earned him a job as a strategy and operations consultant at Deloitte.

“It was at that point that I decided earning my Master of Business Administration would only help serve as another stepping stone in my career,” Vamvakis said.

While earning his degree from the Tuck School of Business at Dartmouth College, he attended an informational session with J.P. Morgan Private Bank recruiters in 2007.

“I didn’t necessarily know a ton about private wealth management until I attended that program, but I immediately felt it was a good fit,” Vamvakis said.

Vamvakis was hired as a summer associate in 2008.

“I felt like I was on the older side when I joined the firm, because we routinely hire college graduates today and a bunch of our emerging talent are more focused at their age than I was,” he said. “But, on the flip side, I would say that my diverse experience prior to starting with J.P. Morgan Private Bank helped me relate to a much wider cross-section of private business owners.”

Though it was an incredibly tumultuous summer, Vamvakis added, he stuck it out to become a full-time associate banker with the firm in 2009 upon graduating.

“We follow an apprenticeship model, in that, during your years as an associate, you are paired with a senior professional to help them serve their clients,” he said. “Over time, you simply grow in your understanding and responsibilities and typically end up taking over the relationships you have been point person on for a while.”

“We manage nearly $5 billion in assets between Mercer County and the seven counties south of it,” he said.

Vamvakis currently leads a team of nearly a dozen wealth advisers and investment specialists who help some of the region’s most prominent business owners, community leaders and wealthy families achieve their financial and personal goals.

He is now looking to expand his team to better equip the market.

“The opportunity is huge, as there are nearly 40,000 households in these eight counties alone in the $1 to $10 million space, with half of those in Mercer County,” Vamvakis said. “There also is a decent amount of wealth in and around health care, biotechnology and life science, as well as venture capital, endowment and foundation activity around Princeton University.

“Our job is simply to understand our clients. We look to have long-term engagements with them and their families, as we should be celebrating multiple generations of anniversaries. It’s all about treating their balance sheets as if they were your parents’ or your own.”

Matthew Vamvakis, executive director at J.P. Morgan Private Bank, has served on the board of trustees for the New Jersey Boys State Foundation since its inception in 1999.

The foundation helps to serve the continuance of the American Legion’s Boys State and Boys Nation programs, of which the 75th session will take place in June at Rider University.

“Instead of learning in social studies class what democracy is all about, you live it at Boys State and Boys Nation,” Vamvakis said. “You run for mayor, councilman, freeholder, governor, state senator, and you are given writeups of your town or state in terms of the challenges and the bills you’ll need to pass to address them.”

To learn more about the programs, visit aljbs.org and njbsf.org.

Peak Pitch networking event takes startups out of elevator … and...