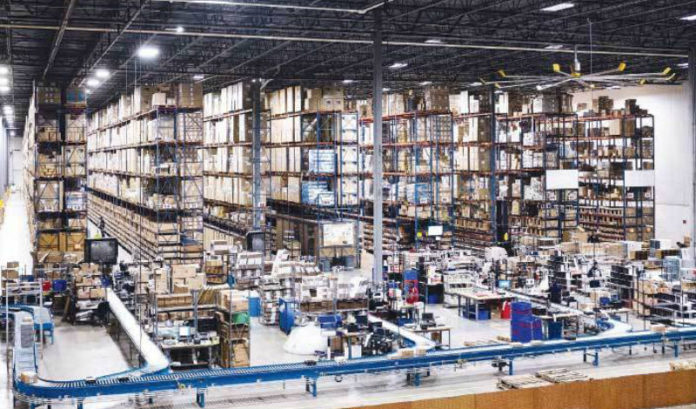 It wasn’t long ago that the biggest trucker haul was the loads of complaints about dire driver shortages.

But after a few recent bankruptcies put thousands of trucking company employees out of a job — including at Elizabeth-based New England Motor Freight, which reportedly employed nearly 1,500 truckers — the brakes have been put on any concerns about that.

Yet, there remain some labor woes in the broad area of logistics. It’s just that, now, it’s the distribution companies that fill truck trailers bemoaning a labor market that they see as difficult.

As the demand for e-commerce products and services continues to swell, third-party logistics providers are struggling to keep up with the quickly intensifying need for qualified workers, especially as competitors such as Amazon hire potential workers by the thousands and the country’s unemployment rate remains low.

A third-party logistics provider such as Edison-based Dotcom Distribution fulfills up to 5 million orders annually these days, mostly moving products in the fashion and cosmetics space.

“So, obviously, labor is always top of mind for us,” said Rob Coon, Dotcom’s vice president of sales and marketing. “We manage several hundred folks here every day. It takes a lot of people to do this work.”

Given that third-party logistics providers have to be ready at any time to expand operations to adapt to their clients’ needs, retention of the workers a company already has is crucial. That’s why Coon is proud to say his company’s average tenure is at least six years.

“Amazon facilities have come into our space and tried to attract workers with higher-than-minimum-wage jobs,” he said, “but we already offer our folks here not just full-time work, but good benefits and the chance for promotions.”

Coon believes it’s the company’s flexibility and willingness to help train and develop workers that gives them an advantage over their corporate competition.

“You might have someone come here in the role of a picker,” he explained. “But, as we track performance, we might give that person a chance instead in the packing area. Some of our standout associates have gone through that process. They came in to do one job and became a superstar in another area.”

Packaging Distribution Resources, an Edison-based warehouse and distribution company that also primarily serves the cosmetics industry, is similarly fixated on retention, because Jack Sandbach, the company’s founder, said it’s not easy to go out looking for new workers.

“We have a ton of our own people, but, when we need more, we have to lean on these agencies that are out there pulling people in all the time,” he said. He added, “Over the past year, we developed a night shift. And filling those later shifts isn’t the easiest thing.”

Sandbach said most of the competition for labor comes from already-established logistics companies. It’s not easy for new entrants to get into the space, especially as the vacancy rate for facilities for warehousing and distribution is as low as 3% in some areas, he said.

“The way we’re living our lives and how we get goods as consumers has dramatically affected the world of logistics,” he said. “Logistics companies now require a lot more employees. And the right facility can certainly help logistics companies attract and retain employees.”

From the outside, the unadorned, gray walls of logistics companies might look the same. Inside, these buildings are taking on a new life.

Logistics companies are starting to ask about amenities for the first time, because any aspect of a building that’s good for employees, such as a space for food trucks to set up, is seen as a worthwhile investment in a tight labor market.

“If it’s enough to retain a couple percent of your workforce, that’s significant,” Machemer said.

Where warehouse and distribution spaces are located is also becoming more central in decision-making.

Historically, logistics facilities could be anywhere that’s convenient for shipping purposes. Now, these companies want to know where the closest commuter train line is, Machemer said.

“You can’t spend millions on a facility without knowing the labor will be there to fill jobs at the end of the day,” he said. “Everyone wants a work-life balance, so location has become a key factor for these companies.”

With business booming as it is in the e-commerce space, logistics company leaders aren’t registering too many complaints about having to reorient their priorities.

“This is a great business to be in right now, even if you’re constrained by the fact that you need the people to get it all done,” Sandbach said.