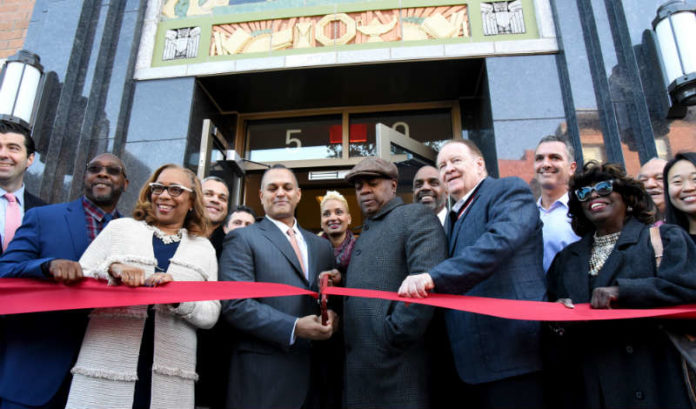 They sat there, patiently and humbly, listening to a who’s who of Newark municipal heads, economic development officials and real estate thought leaders discuss the significance of the opening of 50 Rector Park in the state’s biggest city.

This wasn’t just another building ribbon-cutting. This was more like a rally. An event where everyone attending seemed to feel it was another marker in the new Newark. A day that was a decade in the making. One Omar Boraie and his sons, Wasseem and Sam — the leaders of New Brunswick-based Boraie Development — were glad was finally here.

When it was Wasseem Boraie’s turn to speak, he acknowledged the moment more than the mastery of the building — a 22-story residential tower that offers 170 studio, one- and two-bedroom units, all of which have access to first-class amenities, a rooftop lounge and stunning views of both Newark and New York City. A building, he acknowledged, that took more than a decade to get to the finish line.

“I have to start by saying, my family considers it an honor for the city of Newark to give us an opportunity to build in this location and to bring something special to the city of Newark,” he said. “I look at this room and this is why, 20 years ago, my dad said to us, ‘Figure out a way to become the biggest developer in Newark.’”

Omar Boraie, the man credited with starting the rebirth of New Brunswick, had a similar vision for Newark.

“We came here in 2006, and I said, ‘We’re going to build here,’” Omar Boraie told ROI-NJ afterward. “Everyone said, ‘Omar, you’re crazy.’ I said, ‘No, this is a town I believe in.’ Once you believe in and you love the town, you do everything you can.”

Wasseem Boraie said he and his brother were up to the challenge.

“We felt Newark was different,” he told the crowd. “Look at this room; any ribbon-cuttings we have in Jersey City or Hoboken do not bring the breadth and diversity of people that we have here. And that was our goal. So, instead of doing what most market professionals would consider a standard job to make your building work, we said, ‘We’re going to build the product that we think is not showing up in market studies, that’s not showing up in the 24-month absorption studies.’ We are now on month four of being open and we are 55% leased.”

It’s a number Boraie feels is a testament to the city and those who believe in it.

“We didn’t do it (alone),” he said. “It’s everyone in this room. We have amazing partners, starting with the administration and everyone that is here supporting it.”

He noted how the New Jersey Economic Development Authority held its commitment on the project for four years. How Goldman Sachs did the same for seven.

It was all a matter of timing, Boraie said. One that matched the ascension of Mayor Ras Baraka to office, he added.

“There had to be the right time where it was going to be successful,” he said. “And we feel now in the city of Newark, with the buzz, this administration — look at the talent that works for the city — the sky’s the limit.”

For the Boraies, it will be on the next project, tentatively named 777 McCarter. That one will have nearly 400 units and extend more than 400 feet into the Newark sky — eclipsing the nearby landmarks of the Gateway Center, Newark Penn Station, Mulberry Commons and the Prudential Center.

Leslie Anderson, the longtime, underappreciated and underacknowledged CEO of the New Jersey Redevelopment Authority, says she loves working with the Boraie family.

But, that, she said, comes with the territory.

“This business of urban redevelopment is not for the faint of heart,” she said. “So, there are going to be times that you’re going to be on the opposite side of the table and you’re going to be fighting with a developer because you have to protect your interests and they have to protect their interests. But what is great about the Boraie family and the Boraie Development team is not only the quality of their work, but their concern about the quality, because they’re concerned about who ultimately is going to live here. And that is what’s important.

“These are the guys you want to go into battle with.”

Anderson views 50 Rector Park as a symbol of the new Newark.

“I think it sends a message that Newark can be home to everybody, and that you can have the higher incomes, you can do the higher rents and come to a place like this and be safe, have an excellent quality of life,” she said. “What we find, what we’re hearing that makes this place attractive, is that it’s actually closer to get into Manhattan then if you live in one of the other boroughs that are outside of Manhattan. That’s what makes Newark attractive.

“And, when you talk about the city of Newark, there’s so many amenities here that people can take advantage of, that it makes sense for them to come here and live in the city of Newark. And not only live here, but support the businesses that are here. Start their families here.

“Newark is not on the rise, it has risen.”

“I guess the significance of today and one of the reasons we are having all this hoopla is to send a message out to detractors who think the city of Newark is not a place to do investment and a place to contribute to the economic growth and expansion of this city,” Oliver, also the head of the state’s Department of Community Affairs, said to the crowd.

Her message was not only echoed by Baraka, Deputy Mayor Allison Ladd, Newark Alliance CEO Aisha Glover and state officials from the EDA and Governor’s Office, but Sherry Wang of Goldman Sachs.

“When we started thinking about whether or not we could invest in Newark back in 2008 and 2009, we were in the midst of the great financial crisis,” she said. “When we thought about a city like Newark, there were all the fundamentals that I don’t need to tell you about, the access to transportation, the very strong public sector leadership as well as the incredible corporate anchor institutions.

“What we wanted to do is make sure we didn’t just make a one-off investment. We were very focused in making sure that our investment would be the first of many. And I’m proud to say that, today, we have invested more than $640 million in the city.”

Wasseem Boraie proudly boosts that 50 Rector Park is different from so many other buildings.

“Anybody can build a building,” he said. “But it’s the developer that has the ability to say, ‘I am finding something that is a jewel covered in dust.’ The ability to find the right catalyst to change. That’s development. And that’s what we did here. We could have built this six, seven years ago. It wouldn’t have been a third as successful.

“The talent is knowing when to do it. We’re patient. We’re not rushing to announce a project every year. In these gateway cities of Newark, New Brunswick and Atlantic City, it has to be the right time.”

Omar Boraie saw it. Just as he did in New Brunswick, a generation ago.

“It’s not the building, it’s the community,” he said. “You want to be a shining star in the middle of the town where people will (keep) coming back to. That’s what we’ve done in New Brunswick. That’s what I want to do here.

“We wanted to build something unique, a place where the people are going to start coming. We like to create neighborhoods, because they create security. The more people walking the street, the better the security. Then you’ll have more restaurants. More shops. So, you’re creating business activity just through a building — just as we did in New Brunswick.

“I feel all this hard work from 2006 until now is coming true and being realized. It makes me feel great.”

The community extends to jobs, too. The Boraies, through a program run by Bill O’Day, trained more than 300 residents for jobs; 42 eventually made their way to union membership.

“That means we didn’t just give people a job, we helped give them a career,” Wasseem Boraie said.

On the next project, Boraie hopes to bring that total to more than 100.

And the family is doing more than just talking and training. On Wednesday, Boraie announced the firm was donating $25,000 to workforce training by the city of Newark.

“It’s a small thank-you for allowing us to be here,” he told the mayor.

And another step in helping create a community.

Reacting to tragedy: Condo association attorneys prepare for changes that could be coming in wake of tragic Florida collapse

Murphy, Perschilli ‘strongly recommend’ wearing of masks indoors — even for those who are...

Health Care
Brett Johnson -
July 28, 2021
The pressure, stress and anxiety that appear to have made gymnastics superstar Simone Biles drop out of the Olympics is not a surprise to...

Murphy, Perschilli ‘strongly recommend’ wearing of masks indoors — even for...