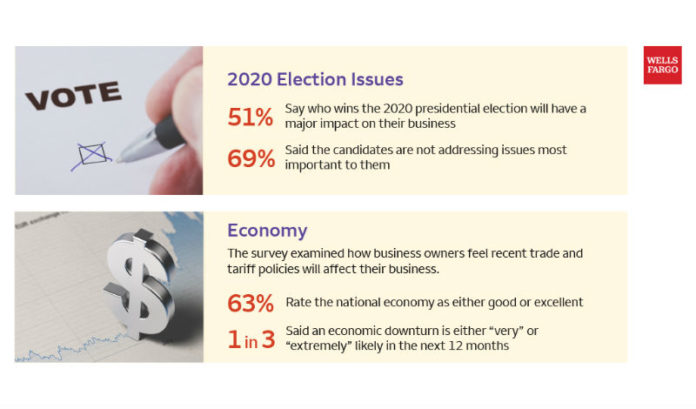 The nation’s small business owners remain optimistic about their firms and the economy, according to the latest quarterly Wells Fargo/Gallup Small Business Index.

The survey showed a six-point increase in overall optimism, even though the majority of business owners said their priority issues are not being discussed on the 2020 presidential campaign trail, and some of the optimism was tempered by concerns about the future.

“As we speak with New Jersey small business owners, they generally feel the economy is doing pretty well,” Bill Stump, Wells Fargo’s Northeast small business strategy consultant, said. “But, they anticipate a slowdown or recession is coming sometime in the near future. Similar to what is indicated in the national survey, we are hearing in this region that many are facing challenges attracting new customers—and they’re feeling some pressure from online retailers and big box stores.”

More than 80% of owners said their current financial situation was either somewhat or very good, while 85% said the same would be true a year from now.

“The Small Business Index is invaluable as one of the tools we use not only to measure current sentiment and priorities among business owners, but future ones,” Elli Dai, head of the Small Business and Personal Lending Group at Wells Fargo, said in a statement. “Both the continued optimism of business owners and their thoughts on key priorities and issues for the election and economy overall provide a window into how to best support their continued growth.”

Not all of the numbers were rosy, however. Although 63% of respondents rated the current economy as either good or excellent, that was a seven-point decline from the prior quarter. And, while 56% said the economy was on the right track for business growth over the next 12 months, 33% said an economic downturn is either very or extremely like during that same time period.

The study also found that a majority of business owners, 51%, believe the winner of the presidential election will have a major impact on their business, with 37% saying he or she would have a minor impact and 12% not much at all.

However, 69% said the candidates were not discussing the issues that are most important to them. Those include taxes, at 21%, health care at 11% and the economy at 10%.

A final part of the survey looked at top challenges for these business owners. They said attracting customers and new business was No. 1, with 15% putting it at the top of the list. Competition came in at 10%, while hiring scored 9%.

“These results seem to indicate that the cautious optimism we have observed over the past few quarters is still present among owners,” Mark Vitner, a senior economist at Wells Fargo, said in a statement. “As optimism continues to climb, indicators such as the levels of preparedness for a downturn and the challenges they are highlighting denote a more tempered outlook.”

EisnerAmper colleagues take technology from drawing board to boardroom