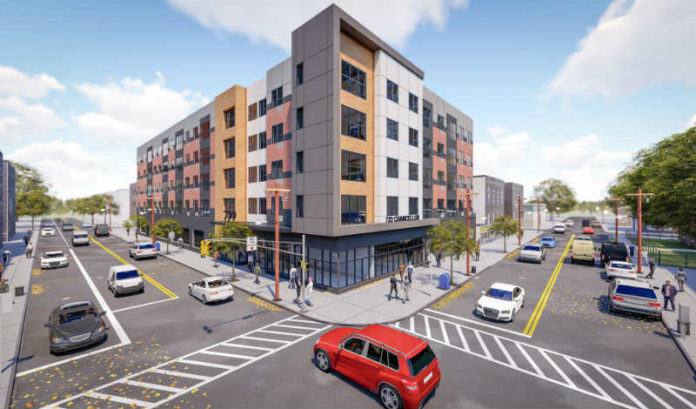 Adenah Bayoh, the developer of HillTop in Irvington, has proposed another project that would bring more of her distinctive affordable housing units to the city.

The HillTop, at 280 Park Place on the former site of a shuttered hospital, has 114 units — and a multiyear wait list, according to The NRP Group. Now, a joint venture between Bayoh and that Cleveland-based developer is planning a new building on an abandoned, vacant parcel of land.

The property, 722 Chancellor, sits at the intersection of Chancellor and Union avenues, and would include 56 rental units, all affordable housing. The developers hope the project will spur the creation of a retail corridor along Chancellor Avenue, with 280 Park serving as the other bookend.

“This vacant lot can be so much more,” Bayoh told ROI-NJ. “We are excited and hopeful about injecting new life and vibrancy to this corner, and affordable housing is the perfect use for it. The working families of Irvington deserve a clean, safe place to live that doesn’t eat up their entire paycheck. Irvington needs this.”

The developers are seeking Low Income Housing Tax Credits for the five-story building, they noted. Expected local partnerships with the Urban League of Essex County and the YMCA of Greater Newark would provide residents with on-site social and support services, including adult and financial education and literacy help, and more.

“We will find out in December whether 722 Chancellor gets awarded a 9% low-income housing tax credit from the state,” Jonathan Gertman, vice president of development at the NRP Group, told ROI-NJ. “With the credit, we can break ground in mid-2020, but without it, the project’s future is in doubt. We have high hopes for it, envisioning the building both as a vessel for community impact, within its walls, and also having broader economic impact in a wider radius around the community.”

Gertman is responsible for overseeing NRP’s activity in the New York metropolitan area.

The building would include modern appointments and amenities including a fitness and wellness center, laundry facilities and a community room, The NRP Group said. A New Jersey Transit bus stop sits outside the property and would connect it with Newark Penn Station, and the area has access to both the Garden State Parkway and Interstate 78.