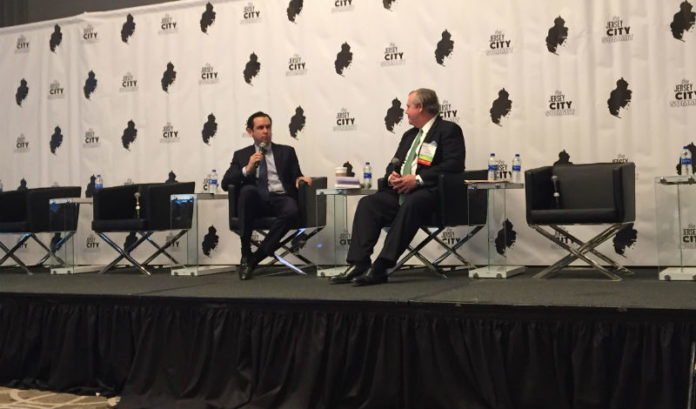 Are tax abatements coming back to Jersey City? Maybe. But if they do, they will not be given out as they were in the past — that is, frequently and extensively.

Fulop said the city is considering tax abatements on two upcoming projects that have specific social benefit to the residents: a supermarket in a food desert on the west side, and for the massive, 100-acre Bayfront mixed-use project the city is overseeing.

Fulop said no one should have been surprised by his desire to turn away from the use of tax abatements to spur development.

“This shouldn’t come as a surprise to anybody,” he said. “When I ran for office in 2013, I was very clear we would eventually change the reliance on tax abatements. And my feeling at the time was that the pendulum had swung very, very far toward a reliance on task abatements and an assumption they would be granted.

“Today, the pendulum has swung very, very far to the other way. I’m not blind to that. But I think that recalibrating the conversation is important.”

Fulop said the key to future conversations may hinge on how much the project will help the city. And simply having an affordable component, he said, is no longer enough of a reason.

“The tax abatement conversation can change,” he said. “We’re open to that conversation, but it has to be meaningful for the city for us to explore it. No longer is it just doing 10% or 15% affordable housing. That doesn’t work for us. Every other city requires that at this point. Once you go to a zoning board or a board of adjustments, they hit you with these inclusionary zonings. So, you can’t ask for something additional because of that inclusionary zoning conversation.”

But you can ask with other reasons, Fulop said.

“We are open to the conversation and we’re willing to explore it,” he said.

And then he offered one piece of advice: Don’t ask the city to bail you out on a bad deal.

“The reality is that when people come to us and say, ‘Mayor, I can’t make this work financially without a tax abatement,’ the first thing that goes through my mind is that you paid too much for the land,” he said. “That’s the bottom line and that’s not my fault. If you did that and made an assumption over the fact that we would bail you out or that was factored into the land swap, that’s not a fair assumption to make.

“So, we’re going to recalibrate that conversation. I’m doing that intentionally. And we’ll see where that goes.”