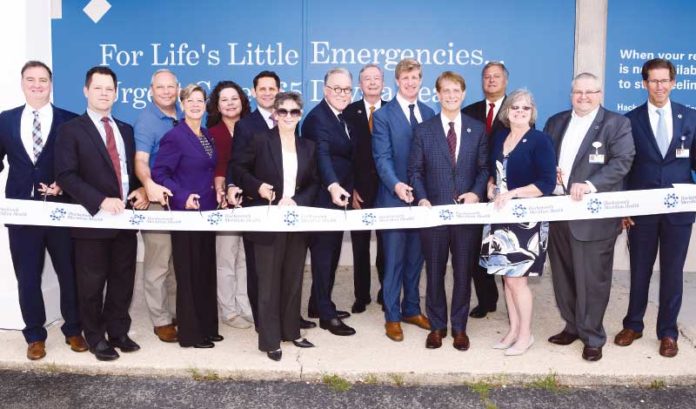 The success of its urgent care behavioral health program has been so strong — and grown so quickly — that Hackensack Meridian Health is ramping up plans to increase the number of facilities offering such care.

“We opened up the urgent care center in Neptune just a couple months ago, and they’re now seeing five to six behavioral health patients a day,” Hackensack Meridian Health CEO Bob Garrett told ROI-NJ. “So, it’s making a difference already in the lives of hundreds, soon to be thousands, of people.”

Garrett said HMH is looking to rapidly increase the number of urgent care centers offering behavioral health, which currently stands at 30. And it’s just one step HMH is taking toward the treatment of behavioral health.

Garrett said HMH, which is in the process of building an 80-bed standalone treatment facility for behavioral health in Mahwah, would like to build similar centers in Central Jersey and South Jersey, enabling HMH to provide a new level of mental health care in the state.

“The goal is to establish world-class addiction treatment services within the state,” Garrett said. “This could be huge. Think about the big names in addiction, like the Betty Ford Center. I’m hoping we can do something for New Jersey like Betty Ford has done for the country.”

“So many people in our state are still leaving for addiction programs,” he said. “A lot of them are going to Florida or Arizona or California. And we’re not necessarily hearing good stories from those programs. And it’s also providing a burden to the families that have to travel long distances.

“So, this is not just about keeping people here in New Jersey, but maybe others from other states will come in that wouldn’t normally come in.”

Behavioral health has long been a top priority at HMH.

“There’s just so much opportunity to really make a difference to transform care with behavioral health,” Garrett said. “It’s amazing.”

That opportunity increased exponentially when HMH completed its merger with Carrier Clinic on Jan. 3.

“The Carrier Clinic merger has gone extremely well,” Garrett said. “The integration between Carrier and Hackensack Meridian could not have rolled out better. (Carrier CEO) Don Parker has been a great leader, a great asset to our organization.

“I think this is the model for the future,” Garrett said. “Patients who were in emergency departments in the past sometimes got lost in the shuffle. We don’t need to do that anymore. They can go to an urgent care center, be seen by a specialist provider within minutes and, if they need a psychiatric consultation with a psychiatrist, have that by telepsychiatry, literally within minutes as well.

“So, we’re going to scale that. It’s still early on. It’s only a couple months, but it looks like the concept not only is working, but I think it’s really making a difference. And that number is going to continue to grow as we get the word out there and educate more of the public that this is available.”

HMH currently has 30 urgent care centers offering behavioral health. They are a combination of HMH-owned centers as well as those HMH partners with doctors groups or co-brands with CityMD.

Garrett did not want to put a number on the number of new facilities that could join the program, but he said it could be significant.

“It’s going to be an area of expansion for Hackensack Meridian for two reasons,” he said. “It provides better access to care, which is really important because that’s what consumers want. And we have a responsibility to provide more affordable health care. Getting treated in urgent care center versus getting treated in an emergency department is providing more affordable care.

Garrett also said HMH was open to the idea of developing freestanding behavioral health urgent care in the future. The idea, he said, is to be where patients need them to be.

“I think as the concept of urgent care behavioral health takes hold and people understand it more and they’re educated, there’ll be less need for it to be right by a hospital,” he said. “People should be able to go directly there, and they should be located in areas that are close to communities so people can get the help they need very easily.