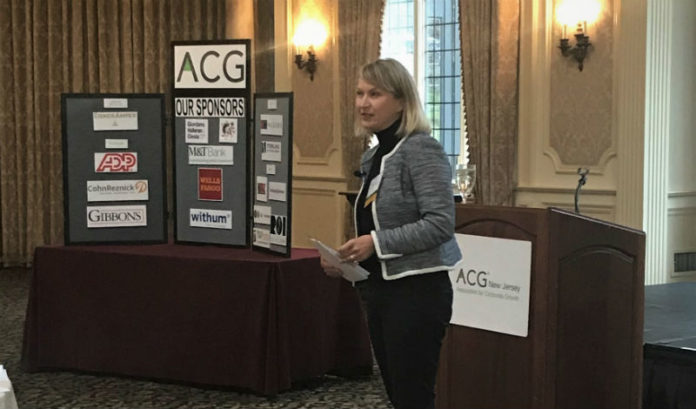 Emma Aer, a native of Finland, has lived in seven countries, working for more than two decades in various marketing and business development roles across industries with companies such as Coca-Cola and Nokia.

In 2014, Aer relocated to Summit after being named CEO of Finlandia Cheese, a manufacturer of Finnish cheese and butter with U.S. headquarters in Parsippany.

Then, last year, Reima, a Finland-based, multimillion-dollar, 75-year-old global leader in children’s active and outerwear, reached out to her with the opportunity to open operations here in the U.S.

Now, nearly one year into her role as head of North America for Reima, Aer shared her fundamental insights and lessons learned as a global leader — and mother of three teenage boys — with members of Association for Corporate Growth New Jersey on Tuesday at the organization’s monthly breakfast meeting at the Pleasantdale Chateau in West Orange.

Here is what she had to say:

Provide direction, but not necessarily a blueprint.

“Good leaders are very clear on the goals and priorities of an organization, but then do not tell their team what exactly they need to do to get there,” Aer said. “An organization needs to be involved in the planning and execution together, or else they will not feel ownership and may not be as motivated to achieve results.”

Clearly communicate everything to everyone in multiple ways.

“If you want a group of people to understand a message in the same way, you need to repeat it 17 times,” Aer said. “Be sure to clearly communicate up to align with the boss, sideways to align with colleagues and down to align with subordinates.”

Aer added that, in the age of email, face-to-face connections and phone calls are still so powerful and important — and that millennials do actually participate in them.

“I think that, while the younger generations are very good with different medias for different kinds of messaging, including email, text, Slack, Trello and WhatsApp, they also enjoy more personal interactions,” she said. “In fact, I have learned that my generation can sometimes get stuck behind email, so I am trying to learn with them.”

Hire for attitude; train for skills.

Aer said she is a good example of an employee who may not have had experience in an industry, but had the right outlook for the job.

“I’ve worked for privately-owned companies, a co-op, a venture capital technology startup — at the end of the day, if you understand what customers want, are able to produce those services and can sell a supply in which there is a profit margin, there is no big industry secret,” she said.

In fact, Aer said it is imperative that employees move out of and away from their comfort zones.

“Even if you don’t really know if you can do it, you will learn along the way.”

Though Aer has lived in Finland, Germany, Austria, Spain, the United Kingdom, Sweden and the United States, she said that, in the end, people are the same all over the world.

“Sure, there are some cultural and gender differences that may cause people to think or act differently, but fundamentally, the core human experience is similar,” she said. “We all have the same needs, fears and hopes for our lives.”

Aer said that, while she has seen managers hire people who look and think like them, diversity is key to success.

“You are only as good as your team,” she said. “At the end of the day, if an individual is not performing, a leader must first look in the mirror and ask: ‘Did I hire the right person? Did I put them in the right job? And did I manage them in the right way?’”

Only honesty and transparency earn trust.

“You cannot afford to mess up your reputation, so you need to always do what you promise to,” Aer said. “Lead your team by example.”

“We all have one mouth and two ears — a proportion that we should always consider,” Aer said. “Listen to your organization, your partners, your competitors and, most importantly, your own intuition, prior to making decisions.”

Aer added that the better a leader can adapt to and be open to change, the better chance the company will have of survival.

“If you try to hold on to the old ways, you’re going to be run over by the change that is coming in every industry and in every aspect of life,” she said.

“Finland is known as the happiest place in the world — which comes from our balanced approach to life,” Aer said. “It’s not about being perfect — it’s the small, incremental things that you do every day to try to improve culture that will bring about excellence.”

In U.S. culture more so than in Europe, Aer said, employees tend to brag about how many hours they’ve worked.

“But it’s not the hours that count — it’s the difference you make and how you have helped others to be successful, as well as your results and the value you have added,” she said.”

“If you have to work for so many hours, maybe this isn’t the right job for you.”

Do not fear nor punish mistakes.

“Making a mistake is often the fastest way to learn,” Aer said. “If you’ve never made a mistake, you’ve probably never tried anything new.”

Aer added how motherhood has helped her not to sweat the small stuff.

“Having spent a lot of time in the emergency room when my boys were little, it really put a lot into perspective,” she said. “During a real emergency, you don’t know if they will come clear out of it or not, but when situations at work are stressful, I think, how bad can it really be? No one is dead or in the emergency room. We can deal with this.”

Be fair and kind.

“People who have to put other people down are very small themselves,” Aer said. “When you support your team, they will be successful. If a team feels threatened or faced with adversity, they will not be productive. Make sure your employees feel safe to perform.”

Aer added that it always pays to be nice.

“At one company, for example, the speed of change was so fast that the organization was changing every six months around me,” she said. “I learned to be fair and kind to not only my superiors, but also my colleagues and my subordinates by helping them to achieve good results, because any given day, any one of them could become my boss.”

Try not to overthink things.

“I cannot control everything and there are things that life will throw at me that I simply must accept,” Aer said. “But, sometimes, the end result is better than I had originally planned or hoped for.

“Life will carry you one way or another.”

Connect with Emma Aer at Emma.Aer@Reima.com.