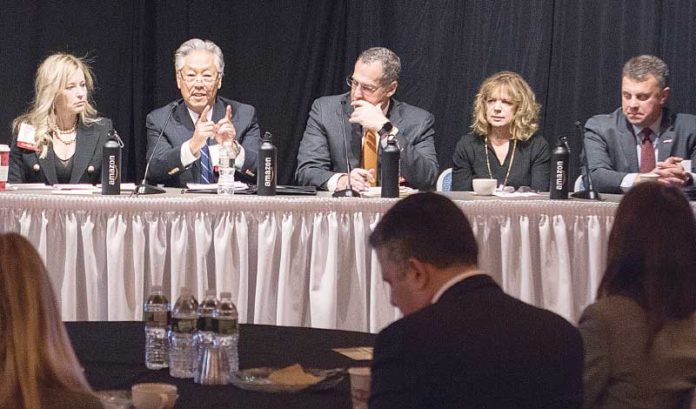 Dennis Morikawa is a partner at Morgan Lewis and a longtime litigator of workplace safety issues and incidents. Over the years, he has counseled many employers. And he’s learned one indisputable fact: Whether a company views safety as a valued commitment or a necessary liability makes all the difference.

“The safety message is something that is never lost on employees,” he said. “They understand it. And they want to hear you say: ‘This is really an important part of our business. This is important to us like production’s important to us. Like profit is important to us. We want all of these elements melding together so we can accomplish positive goals. We view safety as an asset, not as a purely avoidance of liability.’”

Morikawa, speaking at a recent ROI-NJ Thought Leadership Series panel, “Safety Innovation in New Jersey: Leading in Logistics,” said employees always can see how committed their employer is to them.

“Employees are not stupid,” he said. “They watch, they understand. They compare notes with their friends.

“Training is an indication of just how much of a commitment a company has to a safety program.”

Making employees a part of the process is key, according to Marc Lebovitz, president of Romark Logistics in Westfield. He said the creation of a safety committee has had a huge impact.

“It’s amazing,” he said. “But it really works. When you empower people, (they) let us know what’s important.”

Lebovitz talked about how the company went from annoying backup noises to using lights instead. Moving control panels to eye level. And making sure training is both efficient and effective.

“We have a lot of elaborate equipment,” he said. “We’re doing things like job task simplification, where we take tasks and break them down to the lowest common denominator.”

That training, Lebovitz said, is good for new employees and veterans, who need to make sure they are not developing bad habits.

“We thankfully have a lot of long-term associates that have been with us for a long time,” he said. “It’s a real blessing in many ways. But, when it comes to safety, there’s a comfort level that sets in. And that’s part of the retraining that we have to keep doing. There has to be a constant reminder that, just because you’ve something successfully a thousand times, it doesn’t mean something bad can’t happen.”

She noted daily safety questions when employees log in as well as regular meetings with managers where associates are able to raise questions and offer solutions to issues management may not know about.

Amazon, MacDougall said, makes it a policy to have all its managers — from safety officers to human resources — be on the fulfillment center floor on a daily basis in an effort to not only answer questions, but create a positive culture.

“I think our associates are the No. 1 recruiter for us,” MacDougall said. “I think a culture of safety and being incredibly invested in your associates is the best way to attract and retain employees.”

Such a positive connection between employee and employer is not always the case. In fact, panelist Kathy Krepcio, executive director of the Heldrich Center for Workforce Development at Rutgers University, said she worries companies will look to get rid of older employees who may have more workers’ compensation issues, rather than provide a safer environment.

“Worker safety is one of the prominent issues that the task force is looking at,” she said. “They’re looking at both the positive industry standards that are going on and the robotics, because we know all of this technology is certainly improving worker safety issues. There are good companies and good culture. But we also see the darker side of companies who don’t do these things.

“There are companies that will take the data that is being collected every day to these advanced technologies to pull employees out by the labor market.”

MacDougall noted how Amazon has workers of all ages at its centers. She argues the influence of technology has not only made work safer, but it has allowed the workforce to be more diverse than ever. And to keep growing.

“The idea of technology eliminating jobs: I would say that this is the misconception we frequently hear, and it’s simply not true,” she said. “At our fulfillment centers where we have robotics, we actually have more associates working there than you would see at a traditional non-robotics fulfillment center.

“The relationship between robots and employees is truly one that is collaborative and actually has increased the need for employees in our facilities. It’s created more jobs as we’ve gotten more efficient and more productive. And the jobs that have been created, have become safer and less physically demanding.”

Anthony Russo, president of the Commerce and Industry Association of New Jersey, agreed. He feels companies that provide safe workplaces will continue to prosper. The key, he said, is getting it right from the top.

Russo talked about when he was the director of regulatory affairs for the Chemistry Council of New Jersey.

“One of the things that was drilled into my head about safety was not to rely only on technology process and checklists, but how you behave,” he said. “One of the better programs I saw was a company who would actually have their peers watch and monitor their other colleagues when they do a job, because they may pick up on something others wouldn’t.

Lebovitz said he makes safety the top priority at his shop.

“For us, it’s part of the culture,” he said. “Every meeting we have internally and externally, safety is the No. 1 item. You have to stay after it. There’s no debate. No question. Productivity is not first. Quality is not even first. Safety is first.

“Safety, quality, productivity: That’s the order we talk about everything.”

And it’s not a once-a-year thing, Lebovitz said. Safety concerns can come up on a daily basis, he said.

“I’ll give a current example. Everyone realizes how cold it is outside right now. People are coming to work with big sweatshirts or bigger jackets. And maybe they are staying in them because they feel like warehouse is going to be just as cold. Are there pinch points suddenly that were not there during the summer, when everyone had lighter wear and maybe just a T-shirt? Those are the kinds of things you can never stop thinking about.”

“We are using the feedback that we get from associates to constantly reinvest in our workplaces,” she said. “Every day, I’m hearing of examples of how the feedback from associates has been taken and improved the facilities at our work site. Whether it’s a particular mat, or the heights of tables that they work at, or creating scanners that don’t require associates to hold them by their hand. All of these innovations have come from direct associated engagement and hearing how we can make their work better and easier for them.”

“I’m looking at everything: Are they using the right processes to perform the work as safely as possible, so they don’t get an ergonomics injury? Are they bending over and lifting the right way? We really want to find things that may lead to problems early on, so that they don’t result in something more severe later.”

Morikawa joked that if every company had such a proactive stance on safety, he would be out of work. But he knows the importance of the issue — and wishes more companies would see it.

“Often times, companies develop good safety programs because of something bad that’s happened to them,” he said. “They’ve had a serious accident. As a result, it’s been a negative impetus to develop the safety program as a prevention technique, as opposed to a program that they developed because it was the right thing to do initially.

“I try to tell companies in that situation: ‘You can start defensively to try to remedy the situation that occurred, so it doesn’t happen again. But you have to start making a decision as to whether or not you really need to turn it around and go forward with a proactive approach.’

“Everybody had to retool and rethink the issue of safety.”