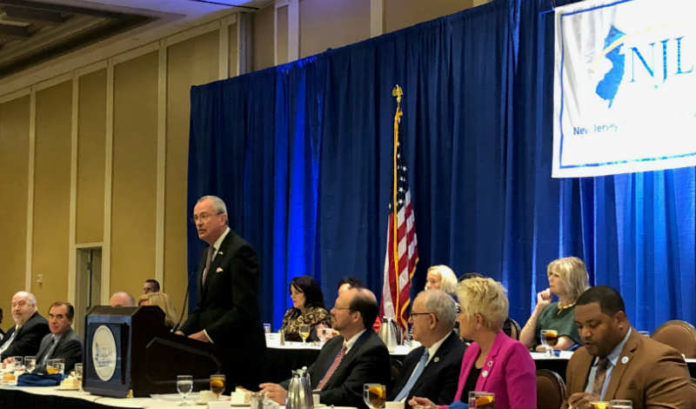 Three days after key real estate officials and economic development leaders expressed frustration regarding the lack of incentives in the state, Gov. Phil Murphy — and a handful of handpicked mayors — expressed optimism that an agreement could be coming soon.

More importantly, a few people associated with the Legislature, did, too.

“We believe we’re close to coming together on a bill,” Assembly Speaker Craig Coughlin (D-Woodbridge) said in a statement. “There’s a framework in place, but we continue to work through the details.”

Details — as in what’s in it for both sides to get this done.

A legislative insider, who requested anonymity because of the nature of the discussions, said this is about more than just good business.

“This is about setting the tone for who is in charge,” the person said. “Legislative leaders know we need incentives — they want incentives. But they don’t want to give Murphy a big win, especially when they feel he has unfairly targeted those getting incentives before.”

Murphy, who held a briefing for more than two dozen elected officials at the annual New Jersey League of Municipalities convention Thursday, said his incentive plans are about bringing wins to the state.

“Our proposal represents the next generation of tax incentives, which will usher in a new era of economic prosperity in New Jersey and enable us to reclaim our rightful place atop the innovation economy,” Murphy said. “In addition to providing for robust job growth, our proposal will ensure every dollar spent on these programs is accounted for and every company that receives an award is vetted and has certified that information in the application is true.”

Murphy’s proposal would replace the incentives programs that expired in June and revamp several current programs, while adding additional avenues for tax incentives.

The incentives programs are built on five pillars, the governor said. They include replacements for the job attraction and retention programs contained in the Economic Opportunity Act that expired in June. In addition to those programs and the brownfields and historic preservation credits, the governor’s proposal includes the Innovation Evergreen Fund, which would help to provide capital to New Jersey based startup companies.

Among the tenets of the new proposal are a requirement that recipients of tax credits sign a community benefit agreement that requires a public hearing on the project, the creation of a community advisory committee, and requirements for training, employment and youth development.

No one is against that. But not everything proposed is wanted by everyone.

The governor’s plan, which was initially proposed in October 2018, would cap the state’s incentives programs at a sustainable level. That can be an issue.

Developers fear caps because they feel they reduce a certainty that awards will actually be available when needed.

A member of the governor’s team said the fear of caps is unfounded at best and unnecessary at worst.

“Do you think the state is going to turn down a big project for a big company by simply saying, ‘Sorry, we’re all out of incentives’?” the person asked rhetorically.

The Governor’s Office, in fact, noted the proposal has been strengthened through negotiations with the Legislature to include provisions to combat food deserts, allow for transformational projects, and incorporate the Economic Development Authority‘s Ignite program, which provides rent payments to early-stage businesses.

Mayors from some of the state’s biggest — and neediest — cities certainly hope a new crop of incentives are on the way.

“Paterson has a blueprint for success,” Sayegh said. “Now, we need the tools to build our city. I am proud to support Gov. Murphy’s bold and innovative economic incentive initiative.”

“Gov. Murphy’s plan for the next generation of economic development incentives is a bold, pro-growth progressive vision that will help attract and create meaningful private investment and jobs,” he said. “With these tools in the toolkit as part of the governor’s broader strategy, we can invest in our people, revitalize our communities, and rekindle New Jersey’s culture of innovation.”

You don’t have to outrun the bear — just the other...