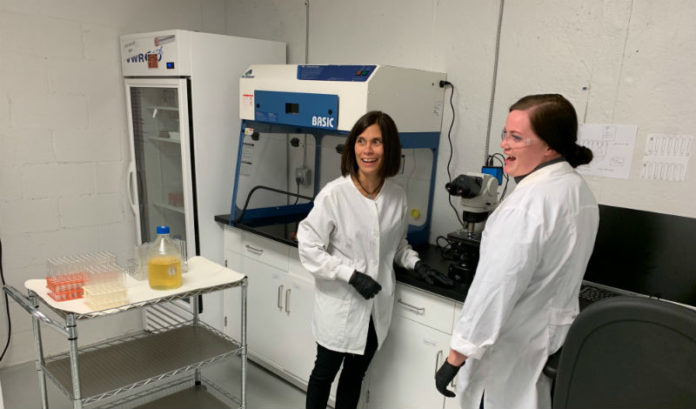 When the news of the latest E. coli outbreak came out earlier this month, John Meccia’s first thought wasn’t to run to the fridge to see if the bag of lettuce he has is from California. Meccia  thought about how the lettuce that is impacting people in nearly two dozen states was washed and cleaned and packaged. And he wondered if his company could have made a difference.

In a time when incidents caused by food-borne illnesses are on the rise, Meccia is confident that Bridgewater-based CMS Technology has some of the answers. It’s an important and complicated issue, he said. One where the cause (cross-contamination) is easy to spot, the solution (better cleaning and sterilizing) is easy to recognize, but the solution is difficult to implement.

The good news: Meccia, the founder, CEO and president, feels his group is onto something. The better news: Its solution involves taking cleaning agents that what we know are effective and using them in different ways.

“We don’t have to introduce new crazy, exotic chemicals or synthetic material,” he told ROI-NJ. “The world’s scary enough. We can use organic materials; we just need to use them just in a different way. By controlling them with the equipment applications that we use, we’re able to get the right parts per million, so there’s not too much and there’s not too little. That’s what is cool. When you put the right amount down, you get the right result and you get consistency and you get safety.”

Meccia said the process could be analogous to how we eat. He takes a hamburger as an example.

Sometimes, Meccia said, it’s just a matter of the order of operations.

“We’ve found that, if you we change the sequence of the cleaning agents, that it actually makes a huge difference in how well they can kill bacteria,” he said.

The goal, of course, is to prevent the bacteria from becoming a problem in the first place. But that can be the hardest part.

Ironically, the movement to eat healthier is in some ways exacerbating the problem in the ultimate example of unintended consequences. There is only so much land to grow produce, he said. The need to produce more often pushes those crops closer to areas where animals are rooming. That can be a big issue.

“In some places, especially in California, you can have pretty dry conditions,” he said. “That can help with growing, because you get so much sun, but it also drops the water table, so you don’t have as much fresh water getting into those streams. And that can lead to dead spots where bacteria grow and continue to multiply. Then, when you draw that water up to spray the crops, it can have bacteria in it.

Meccia, trained as a chemical engineer, got into the food safety space six years ago. It’s an unusual career turn, but one he jokes makes sense.

“Most of my background is in adhesives,” he said. “So, I used to worry about how things stick and getting things to hold together. Now I worry about bacteria not sticking. And the more we got into it, the more it became clear: There’s some similarities between where I came from and what we’re doing now.”

The best part of the job, Meccia said, is that it’s about more than just finding solutions but saving lives.

“It’s pretty neat to be involved with something that’s on the front end of what we all touch and feel every day,” he said. “I’m not a doctor, but I get to have fun every day thinking about how we can make a difference and save lives.

“The reality is, when you can kill food-borne bacteria, you can save lives. And that’s what we’re doing. So, it’s an extra reason to get up in the morning, not just to go after the problem itself, but to realize that the outgrowth of that is that people aren’t getting sick and that’s pretty cool.”

His business is going well. Meccia said he works with three of the top five chicken producers. That success allowed him to move into the meat industry and then into fruits and vegetables. He currently operates in more than a dozen states.

Meccia said he employs just six in New Jersey, but two dozen elsewhere. He hopes that number will by closer to 50 by the end of next year.

The main reason: What he does is proving to be about more than just food safety.

“This is a neat space, because there’s a lot of technology that’s coming through to us because we’re almost standing in the middle of it,” he said. “We’re fortunate to be growing very rapidly, but that’s also giving us as a view at other things. So, it’s not only about food safety and making sure that bacteria is not on food.

“We’re starting to understand how you apply wash waters can impact the experience for the consumer.”