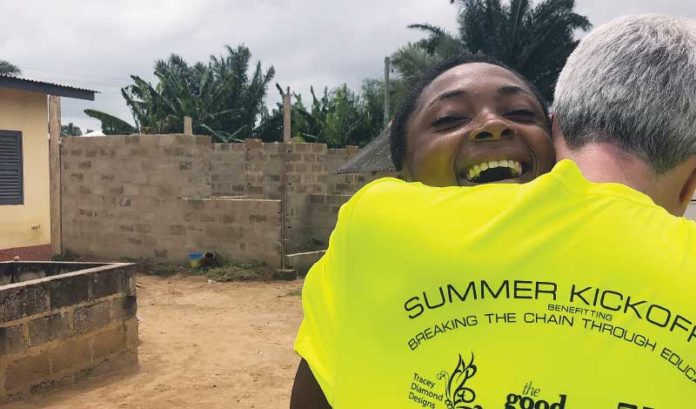 Evan Robbins’ Breaking the Chain Through Education nonprofit has come full circle: The educator started down a path toward its founding after reading a newspaper article about slave labor in the Ghanaian fishing industry. Now he’s finding himself in the press.

Of course, a Metuchen High School teacher doesn’t decide one day to moonlight as a rescuer of children trapped on rickety fishing boats on West Africa’s Lake Volta just to make headlines.

So, what, then, stirred Robbins to take on such colossal endeavors — starting a nonprofit from scratch, going on a rescue mission in Ghana and building a school for children in exchange for the release of trafficked kids — all 5,000 miles from home?

He’ll be first to admit he doesn’t have a good answer.

“It just seemed like the right thing to do,” he said when asked what impelled him to start a charity back in 2006 that would go on to become a full-fledged nonprofit.

Perhaps, he said, it was the fact that the 6-year-old victim of human trafficking in Ghana that he read about before he started the charity program was the same age as his daughter at the time.

“Here was this child that had to work 16 hours each day, eating just one meal each day, barely clothed,” he said. “The contrast between their lives bothered me. And, so, I shared that with my students, and it bothered them as well. So, we did something about it.”

All the highly entrepreneurial work Robbins has done to build an organization that supports children once forced into labor has been helped throughout by students from Metuchen High School.

The students were pivotal in the first iteration of Breaking the Chain Through Education. It was once just a high school club that paired up with the International Organization for Migration to raise several thousand dollars to rescue five trafficked children in Ghana.

Robbins, back in 2010, flew halfway across the world to be a part of the rescue mission.

“Not one child was smiling; no one had an expression on their face,” he said. “They were almost like walking zombies. But, as soon as you get them free, they become real children again. The shift from the horrors of that situation to seeing these children thrive is incredible.”

Some of the children and teens have emerged from a life sequestered in mud huts and on fishing boats to studying in places such as the United States, Robbins said. At least one aspires to be a lawyer — another, a teacher.

According to Robbins, that’s the whole goal: to support these children as they grow up, so they can go on to have careers and pursue entrepreneurial ventures.

“So, what we’ve seen is very encouraging,” Robbins said. “And I’ve formed bonds with the kids and I’ve kept in touch with a few of the kids we rescued. I go every summer now to see the children we care for. They’re like my own children. They even call me ‘dad.’”

Today, having the infrastructure of a nonprofit allows Breaking the Chain Through Education to provide long-term care to those who have been rescued and rehabilitated over the years. Part of the group’s goal is to provide schooling for youth who were denied education their entire lives.

The six-person staff of the nonprofit, which has an office is Ghana, cares for about 100 children and young adults.

“And I think we have the potential to bring (this nonprofit) to another level if we could increase our funding,” he said. “There are so many children who need help.”

As Robbins alludes to, the work is far from over.

Even more than 200 years removed from the abolition of the Slave Trade Act, slave labor is still prevalent as ever in the Ghana region and elsewhere.

“Human trafficking is still such a important issue to deal with in this day and age,” Robbins said. “There’s actually more trafficking than ever before. People view it as a problem of the past, but it’s a problem of our own times.”

Reach Evan Robbins of Breaking the Chain Through Education at: erobbins@btcte.orgor 732-221-8745

Rider offering 20% discount to state employees and their families