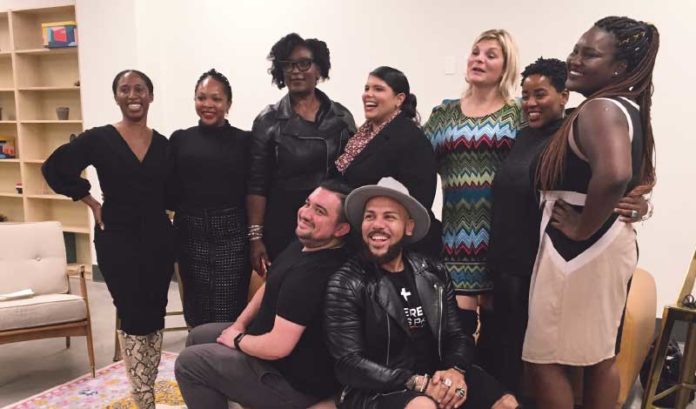 A dynamic and diverse group of women addressed the challenges for women in general who are in tech fields, and for black and Latina women in particular, at an event that was part of Newark Tech Week.

The panel discussion took place at digitalundivided’s new headquarters in Newark. Digitalundivided is a company that works with black and Latinx women to help them build their companies.

The panelists, who all work in tech and tech-adjacent fields, included Akosua Ayim, interim CEO of =SPACE in Newark; Dannéa DeLisser, communications manager at Panasonic; Jazlyn Carvajal, co-founder and CEO of Stay on Your Daily in Lyndhurst; Loralyn Mears, columnist at Grit Daily in New York and VP of content marketing at Toasted Marshmellow in Rivervale; Lindsey Holmes, founder and CEO of Usable Tech Co. in Newark; and Tai Cooper, vice president for policy and communications at the New Jersey Economic Development Authority.

Talking about the importance of being in Newark, Holmes, who has been part of the Newark tech scene since its early days, said: “Newark is probably 80% of why I have been able to scale my agency as I have. I think it gave me the opportunity to be a big fish in this little, but growing pond.”

How men can support women of color in tech

During the discussion, the group came up with some advice on how male colleagues can support women of color in tech:

Gillard asked the group if they could recall a time when they were discounted because they were a woman or a woman of color, and, if so, how they reacted.

Carvajal, who worked in construction, said she had experienced this behavior many times in many different situations: “I realized early on that, as a woman, I had to prove myself every single day. Initially, it bothered me that I had to be the one that had to prove themselves. Now, I’m at a point where I embrace it. Bring it!”

She said she recently was in a room full of men of color, and she was thinking that she was at a great company and that she couldn’t wait to work with them, but “I was asked to provide proof (that she could do the job) that no one had ever asked for before.” They wanted budgets that she had helped compile for someone else, and she told them that the materials couldn’t be provided because they were proprietary. She thought that, if she were a white man, they wouldn’t have asked for this information.

Mears said there have been many instances at conferences where she’d been approached inappropriately by male executives.

Ayim said that, when she was looking for funding for startups, she found herself in a room with white men who doubted her ability to make a company happen. She said that it helped to be able to rely on other women in tech who have raised funds and know what it’s like to be in that room.

“I think when you are a female founder in tech and a woman of color, you need support. It’s a 0.002% chance” that someone will invest in you, Ayim said. “You have to find ways to build yourself back up after every disappointing meeting. You need to have other female founders of color to help you.”

Cooper noted that markets are shifting, and this is causing investors to become interested in startup ideas coming from women of color. These companies can be super-strong investments, she said.

“We have to look outside the narrow-mindedness of what has traditionally been called ‘tech,’” she said. “Large corporations are having to pivot and shift and lean into spaces that are not typically the norm. The market is dictating that, so you have to look at more diverse industries,” and at more diverse geographic locations.

These are ideas that wouldn’t come out of Silicon Valley, Cooper added.

DeLisser said that, while she had been at Panasonic only a short time, she could say that the company puts an emphasis on inclusion. Whether it’s a small ad, the days the company celebrates or the “diversity we celebrate in each of our departments,” the emphasis on diversity is clear. Also, diversity of thought is encouraged and respected: “The men in the room are asking for our experiences.” She noted that the men at Panasonic often show up for minority group meetings at the company.

“Where there is real diversity, that’s reflected in your business performance and the value you are delivering, and that’s how you achieve the value that you want,” she said.

The consensus was that all kinds of people are needed to evaluate the data and methods used to train AI: white, Latinx, black, male, female, old, young and LGBTQ. Also, companies need to include people of varying nationalities, people with accents or people with a hearing impairment, for example, to make sure that the data used and the algorithms developed make sense in the context of the AI project.

Mears said it is important to expand the definition of “diversity” in AI, because it’s so often limited to questions of gender and race.

Holmes pointed out that social media networks have helped communities affected by incorrect AI to “shut that down” by giving them a means to exercise their voices.

Newark Tech Week, which consisted of 14 events put together and hosted by =SPACE, provided an opportunity for tech-based businesses in Newark to connect with people and introduce them to the innovations going on in Newark. The events were sponsored by Onyx Equities, of Woodbridge, InvestNewark (formerly the Newark Community Economic Development Corp.), digitalundivided, the EDA, the Newark Downtown District, Newark Alliance and Phone.com.