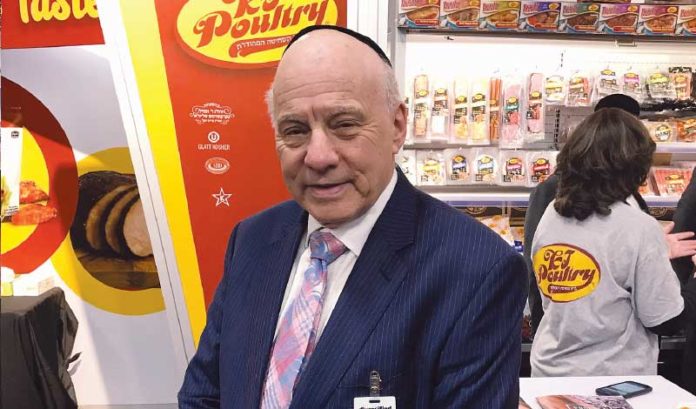 Every November, Kosherfest, the world’s largest and most attended kosher-certified products trade show, descends upon the Meadowlands Exhibition Center in Secaucus.

This business-to-business trade event, now in its 31st year, has been known to attract a variety of chain supermarkets to corner groceries, foodservice establishments to caterers, every kind of kosher decision-maker, where they find opportunity and inspiration at Kosherfest.

This year was no different.

The show floor was packed Tuesday, the first of the two-day event, where almost 6,000 industry professionals attended, and roughly 325 exhibitors featured kosher-certified products and services for the kosher market. The theme of the event was summed up on their promotions in three words: Innovation, Education and Collaboration — All in One Place.

For the novice, here is a sample of some of Kosher terms and symbols used in dairy and meat product labeling:

Here it is, the moment all New Jersey wine lovers have been waiting for!

Gov. Phil Murphy announced this past Friday the Governor’s Cup winners and Best of Show honorees in the 2019 New Jersey Wine Competition conducted by the Garden State Wine Growers Association. 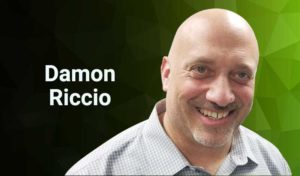 The Governor’s Cup and Best of Show awards for the 2019 Wine Competition were awarded at a ceremony at Drumthwacket, the governor’s mansion in Princeton.

The 2019 New Jersey Wine Competition was conducted for the Garden State Wine Growers Association by the nationally renowned staff of the Beverage Testing Institute in Chicago. Wines were judged as they were submitted all spring and summer, with judging ending in August.

Four of the categories produced ties.

Congratulations to all of the winners in this year’s competition, as every year the bar seems to get raised … and the Garden State Wine Growers Association members have risen to the occasion with premium-quality wine making.

For a complete list of winners, or more info on New Jersey’s wine industry, visit: newjerseywines.com.

Got milk? Not these dessert alternatives

A brand that has been Italy’s premier health food company since its founding in 1990, Valsoia, is making itself available to U.S. consumers, and the key to driving its success aren’t just the healthy ingredients and recipes of its meat- and dairy-free creations, but the equal attention given to pleasing the tastes of consumers’ palates. 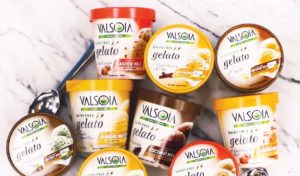 Fortunately, those looking to enjoy a healthier lifestyle can be satisfied with Valsoia’s main course savories, snacks and desserts, as its aim from its inception is reflected in the company motto, “Deliciously healthy” or “Bontà e salute.”

Those who attended our first ROI-NJ Food & Beverage Innovation Summit may recall our food innovation discussion brought to light the issue of health vs. taste, and it is mostly taste that drives consumers’ decision on what products they purchase.

All Valsoia gelato and dessert novelties are imported from Italy, the actual birthplace of gelato. Its plant-based products are made using traditional methods and ingredients at the company’s factory, which is the only completely dairy-free plant in Italy, based in the northern part of the country. They are a leading Italian producer of plant-based products like dairy-free gelatos, offering an alternative to regular dairy-free ice cream by substituting plant-based milks in authentically Italian gelato recipes.

Valsoia is imported here in the U.S. and made available through Dr. Schär USA Inc., based in Lyndhurst. It’s also represented in the marketplace through one of the larger natural food brokers in the country, Alliance Sales & Marketing.

With the recent popularity of plant-based options and many consumers looking for it, the gelato has now popped up and is currently available at select ShopRites, Kings and Weis markets throughout the state. The suggested retail for pints of Valsoia ranges from $4.99 to $8.49.

Iselin based Allegiance Retail Services LLC and Foodtown Inc. announced that Daniel Katz was elected by the board of managers of Allegiance and the board of directors of Foodtown to serve as their new chairman and CEO.

Katz is the CEO and co-president of PSK Operating LLC, a longtime member of Allegiance and Foodtown that, through affiliated companies, owns and operates 13 supermarkets in New York under the Foodtown, Freshtown and Pathmark banners.

Allegiance co-op members are independent grocery retailers all over metro New York, New Jersey and Connecticut under the various banners such as Foodtown, Freshtown, Freshco, D’Agostino, Gristedes, Pathmark, LaBella Marketplace, Brooklyn Harvest, Market Fresh, Big Deal Food Market, GreenWay Markets and Shop’n’Bag. Each member receives support through Allegiance in the form of marketing, advertising, technological and operational support and is supplied through C & S Wholesale Grocers as the main grocery supplier, with a full line of Foodtown private label products. The Allegiance team of executives and management professionals provide many combined years of experience in the supermarket industry to the member base.

“In the last 10 years, Allegiance, Foodtown and its other banners have seen tremendous growth, increasing from 70 stores to over 110 stores today, and we will remain in a very strong position to continue to grow into the future,” Katz said.

Good luck to Daniel Katz, John Derderian, Donna Zambo and the whole executive team at Allegiance Retail Services as you navigate through this organizational transition.

More dessert news, as the first Kulu franchise has opened in the hometown of its 20-something owners, Justin and Gavin Zhu. The two decided to bring the new Asian fusion concept to their hometown of Edison, opening a 3,000-square-foot location in the ShopRite strip mall at 775 Route 1.

Their hope is that a high percentage of the Asian American population would no doubt appreciate these sweet dessert treats that reflect wildly creative Asian fusion tastes. Turns out, they’re seeing a much wider diversity of patrons beyond what they expected.

“We’ve been very encouraged to see the range of customers who are not Asian coming in and trying our menu,” Justin Zhu said.

Kulu desserts was established in August 2011, and the Edison location is the first franchise location outside of the three stores corporately owned in Brooklyn, Flushing and Elmhurst, New York. These two young men saw the popularity of the New York locations and decided to take a chance and bring these exciting Asian fusion flavors to New Jersey.

One example of a new dessert concept features a unique, exotic Asian fruit called durian that has an odd sweet flavor with hints of garlic, pureed and then featured with ice cream, marshmallows and chocolate chips on top of a waffle. Wow, what a combo!

Another concept the Zhus are serving up from the same counter is Dumpling Town, as it’s also named on the building. This menu is a bit more savory than sweet, and features a variety of creative dumplings served in soup or separately.

As this location begins to ramp up, Justin Zhu shared that they’d love to open more locations in the state and grow this brand.

Wishing the Zhu brothers much success bringing this concept of Asian style dessert and culture to our state!