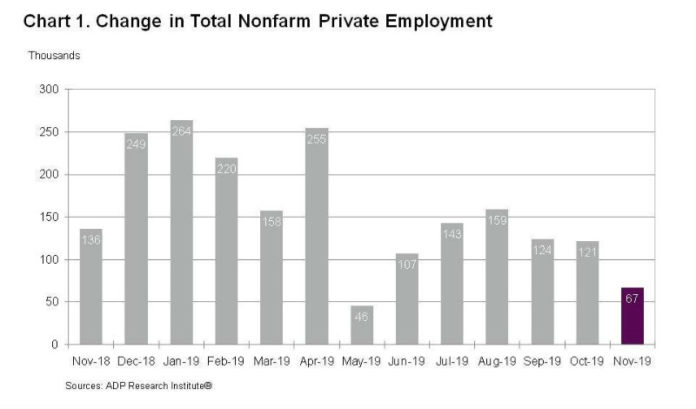 The nation’s private sector employment grew by a mere 67,000 jobs in November, according to the latest report by Roseland-based ADP.

The payroll and human services company said in its ADP National Employment Report that total nonfarm private jobs were down 58,000 positions when compared to last month’s 125,000 new roles.

“In November, the labor market showed signs of slowing,” Ahu Yildirmaz, vice president and co-head of the ADP Research Institute, said. “The goods producers still struggled; whereas, the service providers remained in positive territory driven by health care and professional services. Job creation slowed across all company sizes; however, the pattern remained largely the same, as small companies continued to face more pressure than their larger competitors.”

Breaking down the service-producing industry into seven segments: education/health services was the top gainer, adding 39,000 new positions. Next up was professional and business services, which saw a growth of 28,000 new roles; leisure/hospitality added 18,000; financial activities added 11,000; other services added 12,000. The two segments to lose jobs were in trade/transportation/utilities, which lost 15,000 roles, and information, which lost 8,000.

In the goods-producing industry, each segment had job losses, with construction, manufacturing and natural resources/mining each losing 6,000 positions.