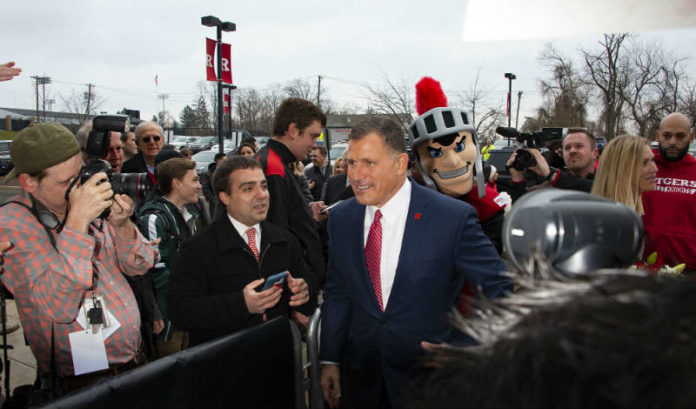 After all of the accolades for all the people who helped bring Greg Schiano back to Rutgers University — comments from school President Bob Barchi, Athletic Director Pat Hobbs and even Gov. Phil Murphy, who made sure he wouldn’t miss the big announcement — Schiano took to the podium.

And he delivered his first public speech — reminding everyone in the room why he was so successful in his first term as the Scarlet Knights’ head football coach, one that ended eight years ago.

Whether it will result in wins — and how long it takes for the program to turn the corner, again — remains to be seen. But, if anyone questioned his desire to be coach at Rutgers again (and, yes, that was questioned) he answered it in a 10-minute monologue meant far more for fans, players, parents and boosters then the gathering of media at the Hale Center in Piscataway.

“I want to thank our fans, the incredible show of support, show of passion,” he said. “That was awesome. That’s what New Jersey is about and that’s what’s going to allow us to do the things we want to do.

“I want to talk to everyone in our great state. What just transpired was an incredible effort by our university. You can’t say anymore that Rutgers is not all in. Rutgers is all in. Now, it’s our turn. It starts with me, our players, our fans, our boosters. Everybody’s got to go all in it, because here’s the problem: We entered the Big Ten conference a few years ago. The teams that we’re looking at right now, they’re not waiting for Rutgers. That ain’t happening. They’re moving. I used to say we’re chasing a moving target. Now I’m going to say it this way: We’ve got to pass a moving target.”

It was a plea to make Rutgers football relevant again. Or, at least, conversational.

“When you’re around the water cooler, when you’re around a coffee machine at work, we need you promoting Rutgers football,” he said. “Those block R magnets, they got to be on your car. We have to create the importance, every single of us. That has to happen again. We’re chasing some big dudes. No, we’re passing them. That’s what we got to do. We ain’t chasing, we’re passing. And that’s got to happen, and it’s going to take every single one of us to do it.

“The real beauty of this thing: People in New Jersey know how to work, they’re not afraid to work, not afraid to get after it. We collectively show what can happen.”

Schiano reminded everyone that he, too, is a Jersey guy and a Rutgers guy. He said — even through the various stops he made in the pros and at a different colleges the past eight years — that he never stopped thinking about or watching Rutgers football.

Rutgers football, he said, can be a uniting force.

“We have two major cities that border our state. There’s one thing that’s all about just us: And that’s Rutgers. Rutgers University, Rutgers athletics and Rutgers football. We have a great opportunity to join everybody together and that’s what we need to do.”

For 10 minutes, it was 2011 all over again. And, after eight years of less-than-stellar results — and an even worse atmosphere — that was all anyone associated with Rutgers could ask for.