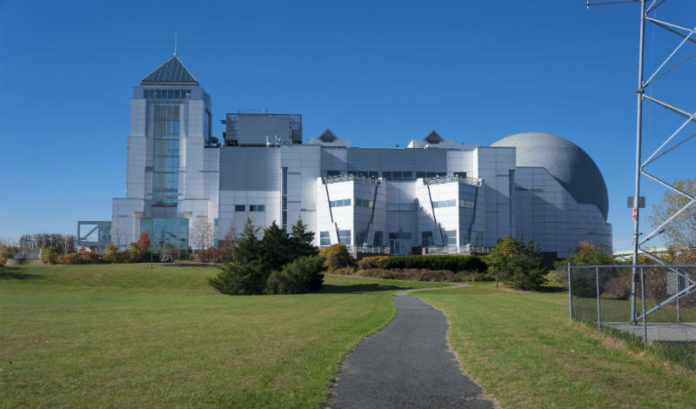 SciTech Scity at Liberty Science Center, a planned campus that will launch and grow science and technology companies as well as reimagine K-12 science education, has received a financial boost when Paul Hoffman, LSC CEO and president, announced on Tuesday a $10 million gift from Frank J. Guarini.

The donation from Guarini, who is a former U.S. representative, New Jersey state senator, a philanthropist, statesman and real estate developer, is the largest the center has ever received in its history, it said. The gift will be matched with a $5 million pledge from David Barry, LSC co-chair, on behalf of himself and other Jersey City developers.

The $15 million investment, LSC said, will allow for the first phase of the project to open by late 2020. It will be named the Frank J. Guarini Innovation Campus.

The first phase of SciTech Scity includes LSC and the following construction:

“Many of us believe that the renaissance of Jersey City began with Frank Guarini’s visionary work,” Hoffman said. “As a real estate leader, political leader, and businessman, Frank has fostered Jersey City’s success with intelligence, integrity, humor, and elegance. His $10 million gift to SciTech Scity will ensure that Jersey City has a bright future as a world-class center for innovation.”

“I have had the honor of knowing Frank for many years. By making this historic gift to Liberty Science Center for SciTech Scity, Frank’s generosity will help so many people as it solidifies Jersey City’s future as a hub for science and technology innovators, educators and entrepreneurs,” Jersey City Mayor Steven Fulop said.

“David Barry has been an inspirational board chair of Liberty Science Center and an innovative real estate developer in Jersey City. He’s been a friend and mentor to me and LSC, and the $5 million pledge on behalf of himself and other developers brings SciTech Scity closer to reality,” Hoffman said.

SciTech Scity will become a place where companies and researchers will test new products and services before they come to market, LSC said.

“The Frank J. Guarini Innovation Campus will bring together entrepreneurs, scientists, academics, students, and other thinkers and doers who share Alan Kay’s prescription that the best way to predict the future is to invent it,” Hoffman said.

Future phases of the project will include expanded incubation labs, a science-focused public school and other STEM-focused facilities.